“Page’s continued commitment to downtown Dallas illustrates the attractive nature of this location for companies who want to retain and recruit the best talent,” says Heidelbaugh, an executive managing director for Cushman & Wakefield Dallas. “The location offers a huge variety of walkable amenities, which is one of the top features today’s office tenants say they want.”

A Dallas landmark, the 31-story Merchantile National Bank building was built in 1943 in the Art Moderne style and was the tallest building west of the Mississippi River for more than a decade, according to the City of Dallas. At the time, it’s construction was a significant investment and expression of faith in Dallas as a primary city, specifically downtown Dallas. 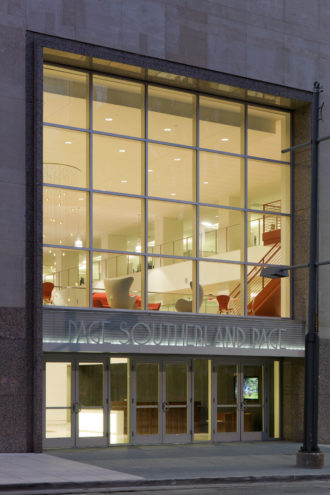 The 523-foot Mercantile Tower was the home of Mercantile National Bank, founded and owned by Dallas’ Robert L. Thornton.

Following the downturn of the economic depression in the 1980s, the building was abandoned in 1993. Fifteen years later, a deal between Forest City Enterprise and the city to receive substantial financial incentives led to a rehabilitation of the Merchantile into a $140 million luxury living and retail space.

Page has been in its current location since 2011. When they originally leased space in the Mercantile National Bank Building, the firm transformed the bank’s former lobby into an open, collaborative, three-story office space. At the time, the project was the largest adaptive reuse undertaking in downtown Dallas in more than a decade.

Page’s leadership said the decision to remain Downtown for at least an additional seven years was due in part to the area’s energy, amenities, and ability to attract talented employees.

In the time since their original lease, Page has enjoyed the incredible transformation occurring in Downtown, according to senior principal Mattia Flabiano.

“Since moving to Main Street eight years ago, we have seen a tremendous change in the energy in downtown Dallas, with more people living, working, playing, and staying Downtown,” Flabiano says. “It was a positive move in 2011, and our location will continue to be a plus for us for the next decade and beyond. Page is proud to be a part of the revitalization of the 1943 Mercantile National Bank Building. We transformed the former Banking Hall into our office and continue to be inspired by its history and design.” 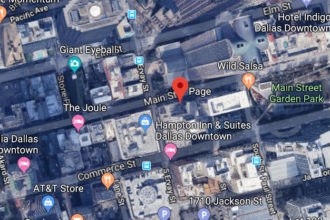 “One added benefit of being in a walkable location in Dallas is access to restaurants, coffee shops, a variety of retail stores, and other amenities,” Flabiano continues. “Our architects, interior designers, and engineering folks are walking to lunch together, doing after-work activities together, and doing it all in Downtown. Collaboration is how we work, and our work environment downtown has fostered and increased that interaction.”