A new Southern cooking restaurant concept is making its Texas debut in Uptown.

Miami-born Yardbird Southern Table & Bar is fixin’ to set up shop in a 7,000-square-foot space at Park District, Trammell Crow Co. and MetLife Investment Management’s 900,000-square-foot mixed-use hub. The Park District location will be the restaurant’s first in the Lone Star State. 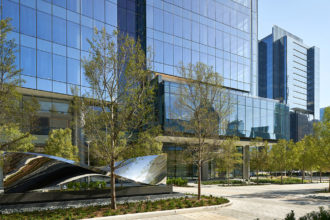 The retail space at Park District in Uptown.
Courtesy of Trammell Crow Co.

“Dallas is an amazing city, with art, entertainment and a great dining scene.  I knew Yardbird would be a perfect fit.  We are so proud of our brand and the truly sensational dining experience that we offer and can’t wait to introduce it into the Dallas market,” said John Kunkel founder of 50 Eggs, Inc., parent of company of Yardbird.

Yardbird comes to Dallas highly recommended with votes of confidence from James Beard as a semifinalist for “Best New Restaurant South,” praise from the New York Times, and a spot on Bon Appetit’s “50 Best New Restaurants.”

“We are confident that Dallas-Fort Worth will love Yardbird Southern Table & Bar and we are honored they have selected Park District as their first location in Texas.”

This is the second restaurant concept Park District has garnered in the span of a week. Last week, Perry’s Steakhouse & Grille joined the mix at the buzzy, mixed-use development with a two-story bar/restaurant space designed by Aria Group Architects slated to open in the second half of 2019.

Paul Brandes with Charter Realty & Development Corp. lined up the lease for Yardbird with Nathan Wood and Sydney Muller of CBRE.