I have grown tired of emcees continually asking panelists where we stand in the economic/development cycle, as if begging for a slowdown. I’m issuing a fair warning: The next speaker I hear compare it to a baseball game is going to get a rotten tomato in the ear, slung by yours truly!

The more important question should be, how can we continue to keep up with the demand to serve the consumption needs of our steadily growing North Texas population, as well as the still exploding B2B operations as we run out of developable industrial land? 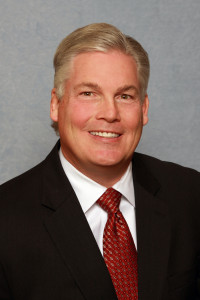 Since I began my career 26 years ago, there has always been an abundance of ready-to-go sites throughout the area’s major business parks: Mesquite, Northgate, Valwood, Frankford, North Dallas, Waters Ridge, Great Southwest, Carter, Alliance, and Meacham. It’s the reason DFW has been considered second tier in the investment markets for so long. The mantra was: “There’s always more land available in the Dallas area, so rates can’t be sustained.”

They were right. The rule of $3s lasted for a long time and actually became the rule of $2.50 during the last down turn. We were truly blessed, but the tide has turned. Most of those great submarkets are really, really out of land, and if the lease rates slide, it will only be by a little bit.

Other than North Fort Worth, South Dallas, and small pockets here and there, we don’t have much room to run. It’s time to wake up and plan for the next generation of business parks. The cities of Grand Prairie, Arlington, Carrollton, Farmers Branch, Coppell, and Garland have all pulled their weight, showing great vision back in the 1970s and 1980s to support industrial land development that lasted for more than 40 years. That era is quickly coming to an end, and the time to identify new submarkets is now.

Cities that have previously been considered “pioneering” are coming into focus as potential hot spots for investors and developers. It will require a concerted effort between municipalities and developers to have the vision and passion necessary to properly serve the needs of our future generations. City leaders need to have the sense to see that functional industrial parks are essential and complementary to their dream developments of mixed-use, entertainment meccas.

Over time, the major markets of Los Angeles and Chicago came to grips with their lack of land and embraced the opportunity of geographical expansion up to 50 miles out, evidenced by the Inland Empire and I–55 Corridor south of I-80. So where is our Ontario or Joliet?

Could it be McKinney or a smaller neighbor? Maybe Forney or Terrell? Midlothian or Alvarado? Only time and great public-private partnerships will tell.

Rick Medinis is a principal and president at NAI Robert Lynn.

Don’t Write Off the Value of Modest Apartment Buildings