For many years, our investments/land division (formerly Novus Realty Advisors, now a division of Younger Partners), has produced a report to assist investors in deciding the viability of acquiring undeveloped land for mid-range and long-term positive returns. Since our 2017 report was distributed, DFW has experienced continued active growth in virtually every commercial and residential product type. As the accompanying exhibits indicate, transaction volume held steady for both user and investment product. Much remains the same in our report this year, except we are seeing legitimate evolving trends that should be acknowledged.

Absorption of developed, undeveloped (land with limited or no access to infrastructure permitting immediate use), and underutilized land activity traded at a comparable rate to 2017. The trend continues as aggressive, new, vertical development has left even fewer desirable infill sites remaining available. More peripheral sites are seeing increasing activity with employers competing for employees desiring a shorter commuting distance. This competition for employees, inflated raw land, and construction costs, a rapidly increasing cost of living, and transportation congestion are all beginning to affect our extended growth cycle. However, we remain attractive to geographical relocations when compared to our competition. With the anticipated continued job growth, inbound population increases, relatively low interest rates, and a sound local economy, there is no reason for an immediate corrective cycle. Should any one of those benchmarks collapse or even display a solid weakness, a correction is imminent.

Although we have retained historically low capitalization rates, despite sale prices at a multiple of replacement cost and static retail demand, income-producing investments have maintained their active volume, largely due to the need to invest 1031 trade equity and the lack of competition with alternative investments. Excessive competition to acquire cash flow assets providing even the smallest yields produces increased vulnerability to market corrections. A cyclical downturn in the national economy would have a dour negative impact and threaten positive cash flows.

Inherently, land investment differs greatly from other types of real estate products generally because of its inability to produce interim cash flow and its considerably more sensitive vulnerability to recurring cycles. The criteria used to determine potential land opportunities, while becoming more sophisticated over the last two cycles, remains principally in implementing basic strategies. Perhaps the most important of these is the ability to project and fund ownership long term. Positive liquidity, the allowed ability to sell for an acceptable profit at the optimum market time, can be highly speculative. When an investor is in a forced sale position or loses confidence in the future of the investment, returns are jeopardized and most frequently result in a significant loss.

Sorting Through the Noise

With the proliferation of online data, should investors search hard enough, they can find support for any speculative investment philosophy, positive or negative, to justify an action. This presentation qualifies as but one of many. However, certain facts remain more pertinent than most as they may apply to investments in unimproved or underutilized land assets in DFW. Again, referring to the accompanying charts, a conservative estimate of pending 10-year population growth for DFW is 1 million plus new residents. Climate, central location, progressive state and local government, and no personal or corporate income tax would support this projection.

Possessing no true natural barriers for continued land absorption, there appears to be no single real-estate-oriented obstacle to limit this projection. Population growth can be fueled both organically and by external inbound relocations. With trailing 12-month growth of 120,000 jobs, the majority of the population increase stems from such relocations. It is estimated that only eighty percent of the jobs created by recent moves into DFW have been filled. In the last six years, over thirty-five thousand acres of land have traded with an additional large number not being included when classified as long-term investment land.

Like most types of investments, real estate is cyclical. Investment success or failure can often solely depend on where the cycle is at the time the purchase is made in conjunction with the investor’s ability to determine the true state of the cycle. Buying at various points in a cycle, cost averaging, can provide some security allowing for both buying selling to generate positive results. There has yet to be a final cycle. The ability to hold long-term may negatively impact the final yield, but does offer security. While the ability to use historical data to project long-term value is logical, many down cycles have been created by artificial, non-real estate related influences that were difficult to anticipate. For example, in the late 1980s, tax law changes and deregulation destroyed the market. In the late 2000s, the subprime collapse did the same. It is reasonable to assume there will be more fragile “bubbles.” 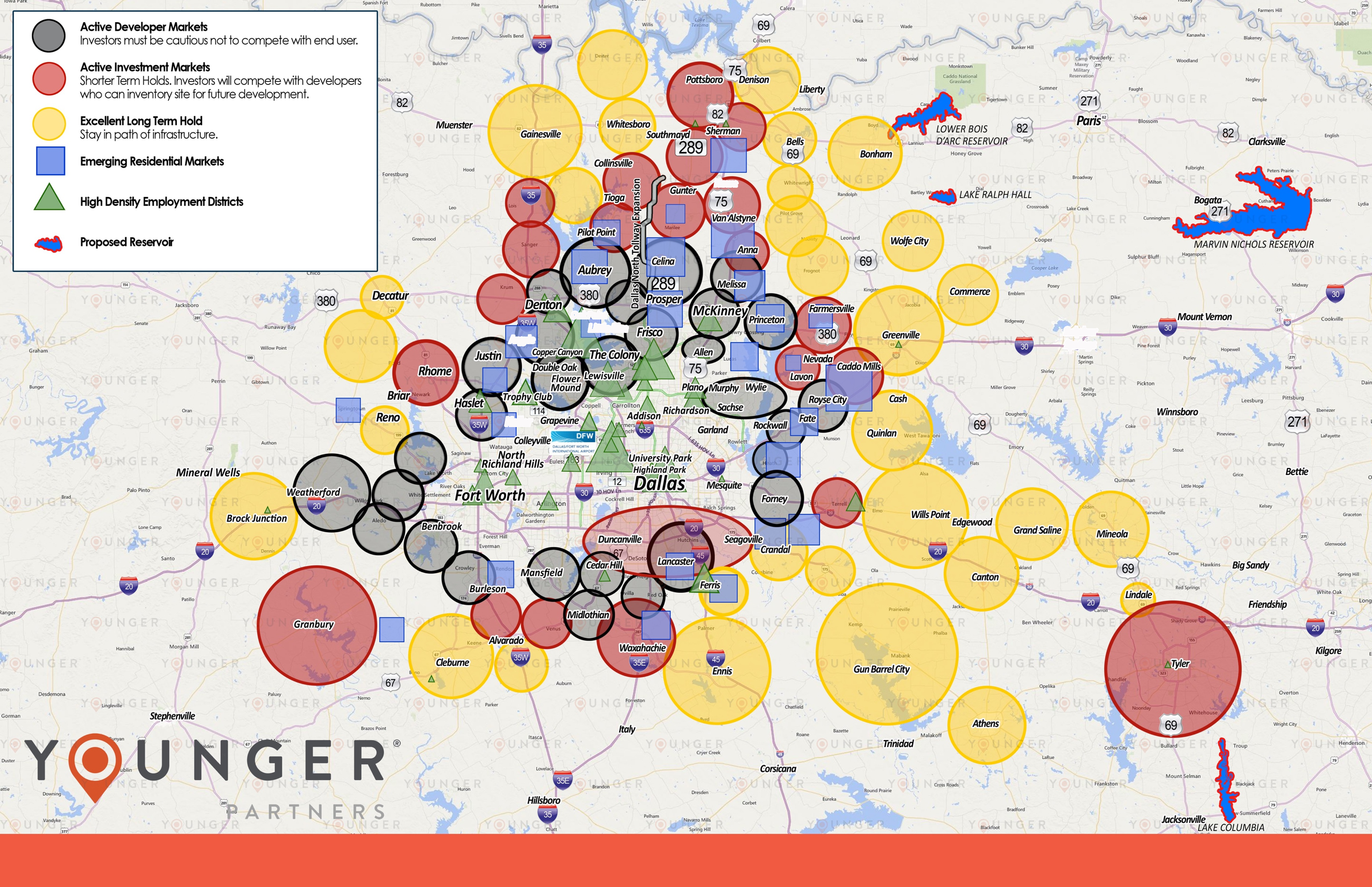 Included in our report is our Land Absorption Map (click on the map for a larger view), which sets out various types of 2018 commercial real estate activity in specific geographic areas. Actual sales, current listings and announcements of pending projects are the basic criteria used and have been benchmarked annually to complete the current year’s map. Not difficult to understand, the progression from active to long-term generally follows the current availability of infrastructure and newer, expanding city services. Land currently available for vertical construction will bring significantly higher values and greater activity over those that must physically wait for services.

Over the 20-plus years of presenting the map, it is interesting to note that, while the circles have limited movement, the colors have many changes and generally move out from the core in concentric circles. An ever-increasing burden to investors and developers is the dramatic involvement of politically motivated, impractical restrictions imposed on reasonable growth by many local municipalities. Frequently, viable, beneficial projects are excluded from fruition by flawed, unrelated personal or political interests.

Younger Partners is a member of the highly respected North Texas Land Council (NTLC), a group comprised of 50 of the most active and talented land brokers in our area. Believing that activity generates more activity, the North Texas Land Council freely shares information with its competing members, and the market in general, on a level of professionalism unusual within similar organizations and, as such, is a benefit to all clients. Much of the projected activity displayed on the Younger Land Absorption Map (YLAM) reflects the activities of the NTLC.

Pricing Levels May Have Achieved Their Pinnacle

The market today continues to see record prices for infill, readily developable sites possessing available infrastructure, permitted anticipated uses, and demand for completed product. However, distinct indications of this aggressive approach are beginning to surface, perhaps harboring at a minimum at least a cooling off period, or perhaps the “correction” we have anticipated the last few years. As it relates to land, pricing levels may have achieved their pinnacle for this long evolving cycle.

For many increased cost factors, single-family new home prices have increased 50 percent in five years making affordability more difficult. Less obvious are completed-per-square-foot costs in all commercial sectors. The strong local and national economies along with  continued relocations have provided record employment and income. That momentum will carry through at least the first half of 2019. Past that, projections are difficult. DFW is well positioned to absorb a moderate abated market. Land prices, however, must readjust for the return of an active market.

Again, as last year, the pipeline for new projects of all types has gotten understandably smaller which presents an interesting speculative projection for 2020 and beyond. Increased activity for pure, longer term investment sites has continued the extension to the outer lying, concentric circle tracts, considered “pure investment tracts”. Until 2016, such tracts remained fairly benign in sales activity and price fluctuation.

These specific investments are becoming more attractive since competing investments such as oil and gas (price fluctuation and over production), a pending bear stock and bond market (the same non-occurring “pending” from last year), and the tech world which offer much higher risk vehicles. Additionally, local investors (the heretofore most active group of land speculators) are seeing increased competition from more patient national and foreign investors. Yet, historically, and perhaps ironically, a large number of the most successful, wealthiest investors have made their patient fortunes in land by simply applying these basic techniques. 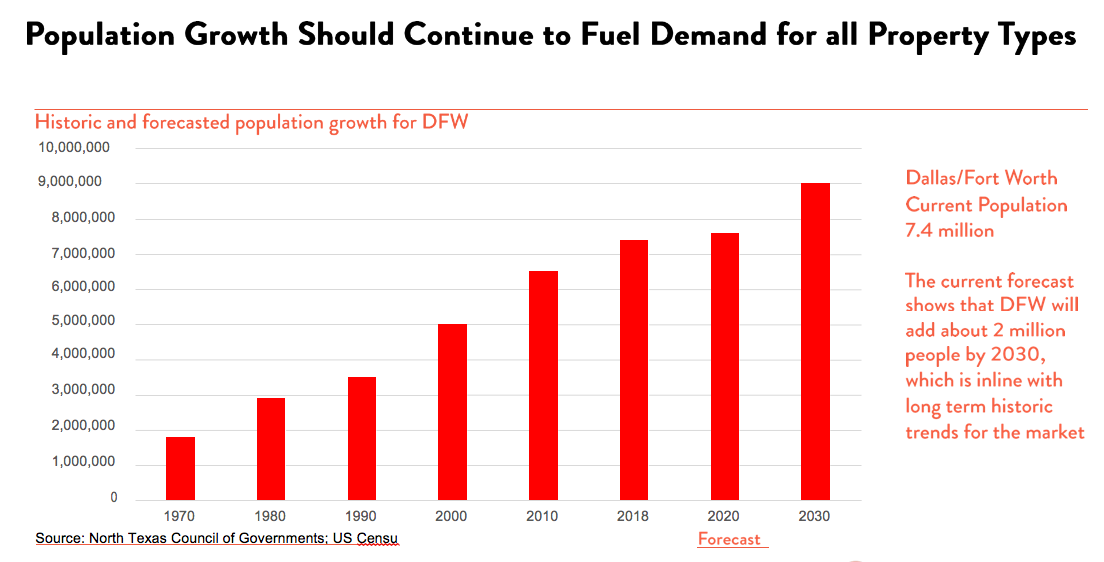 Our continuing and extended analysis, as displayed on the land absorption map (revised November 2018) is principally based on extensive historical data utilizing market experience possessed by Younger associates, members of the NTLC, and reliable future projections from sources that have traditionally displayed accurate demographic information. Our attached graphs were created by Steve Triolet, Younger’s director of research.

Depending on which source one chooses to use, the DFW market still expects to absorb an additional population expansion of 25 percent  to 30 percent over the next 15 years. Success in real estate investment will be to determine where that growth will locate. History has taught us that product will be made available and priced based on pure economics. The cost to provide available product to meet demand will depend on the availability of affordable infrastructure (sewer, water, roads, proximity to employment centers, service commercial, schools, political climate, etc.).

Land prices will fluctuate according to such availability, absorption, the national economy, and the popularity of any specific product. Investing in the right opportunities will generate exceptional rewards. Some estimate that it requires approximately 12,000 acres to 15,000 acres of raw land to accommodate one million people in a reasonably confined, socially acceptable, service-provided environment. DFW enjoyed record rainfall in 2018 keeping our resources at sustainable levels. Given the droughts of previous years, with the population growth that has occurred, a dry year will present some worrisome challenges only new sources can cure. A partial answer lies in the creation of two new reservoirs in East Texas, probably 10 years from service. Lack of both potable and irrigation water access will be an inevitable liability. 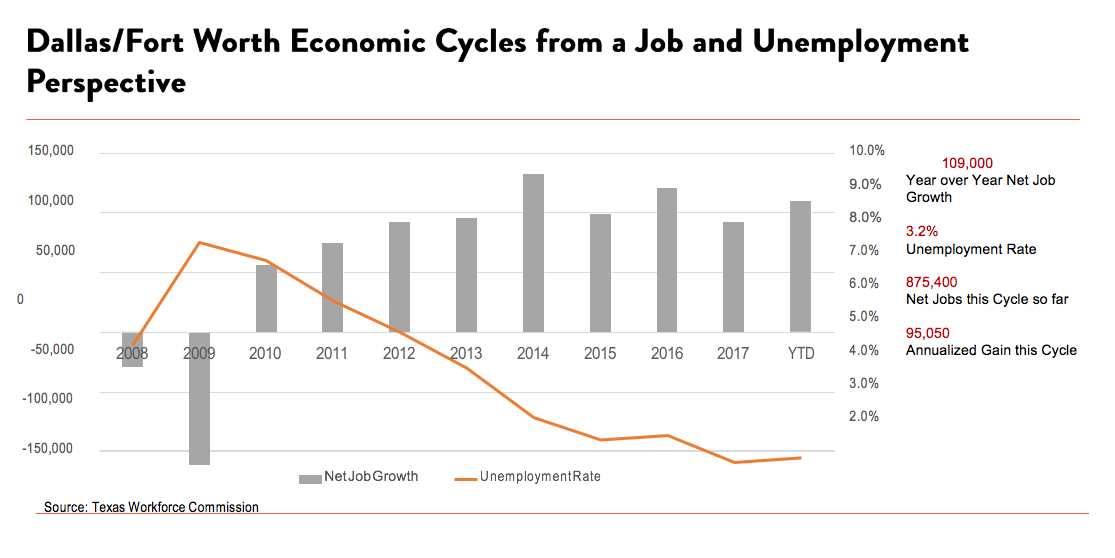 We have been fortunate to have had an extended period of prodigious activity which can at least be partially credited to our aggressive political structure–both local and state–our sophisticated and informed developers and engineers, and our incredibly competent and equally aggressive local and regional economic development corporations. Of equal depth, however, is the dynamic, well-educated, hard-working, and professional “under 40” group of brokers, administrators, managers, and general employment base who have emerged during this cycle. They may well be the first group exiting a positive cycle who have learned and benefited from the experience of their predecessors. They may not need a disaster to stay relevant and solvent.

In conclusion, the principles of successful, sophisticated investment must utilize basic criteria, some of which are outlined above. Access to infrastructure, most importantly water, the admirable, continued effort by our current Dallas mayor to utilize available land in our southern corridor, absorption of the few remaining infill sites, high suburban infill land costs, and the migration of employment centers will all play significant roles in prudent investment decisions. Utilized in the investment process, the only remaining elements are sound financial strength and patience.

Robert Grunnah heads up the land division at Younger Partners.