Enjoy unlimited access to all of our incredible journalism, in print and digital.
Subscribe Now
Advertisement
Commercial Property Sales

Last year was a big year for commercial property trades in North Texas, and the market should see plenty of action in 2016, too.
By Christine Perez | March 10, 2016|7:21 am
Advertisement 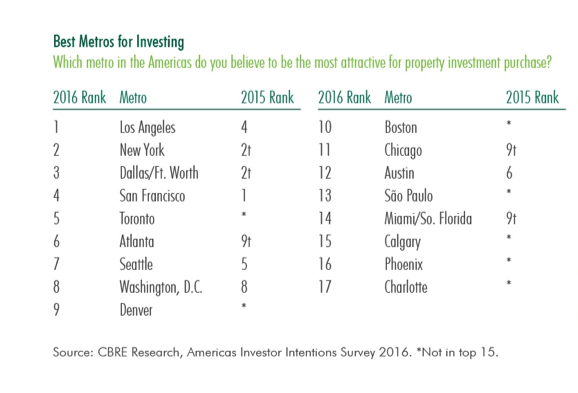 Last year was a big year for commercial property trades in North Texas, and the market should see plenty of action in 2016, too. That’s the word from CBRE, which whose Americas Investor Intentions Survey names Dallas-Fort Worth the country’s No. 3 target market this year, behind Los Angeles (No. 1) and New York City (No. 2).

According to CBRE’s study, the majority of real estate investors in the Americas intent to ramp up their buys in 2016, despite economic and capital markets uncertainties. Sixty-five percent of investors intend to be net buyers, up from 60 percent in 2015, with the vast majority (81 percent) intending to maintain or increase buying activity this year.

Chris Hipps, managing director of investor services for CBRE, said North Texas’ diverse economic strength adds to its appeal. “DFW is attracting a broader pool of talent and experiencing a surge in both infill and suburban urbanization,” he said. “Plus, we’re still viewed as a market where comparatively good returns can be achieved. All of this combines to attract a deeper class of private equity and institutional investors.”

Here are more findings from the CBRE study:

Among the five different investment types—core, secondary, value-add, opportunistic, and distressed—value-add remains the preferred strategy (40 percent). The preference for value-add declined in the 2016 survey, while the preference for core (second highest) rose, indicating some reversion to a more conservative strategy. Similarly, investors’ risk for secondary (non-core) assets edged down.

Multifamily (28 percent) is the most attractive property type to investors in 2016, replacing the industrial sector, which was last year’s favorite. Office (24 percent) and industrial (23 percent) came in almost tied for second. Retail (17 percent) still lags behind the other sectors, but this percentage reflects a slight strengthening in preference from 2015.

Weak domestic economic performance (27 percent) is considered the No. 1 threat to the property markets in the Americas in 2016—approximately the same as in the 2015 survey. Weakness in the global economy (25 percent), particularly as related to China, is perceived as the second largest threat to Americas’ property markets in 2016.