When I was first invited to spend a couple of days in Memphis, I instantly envisioned myself knee-deep in barbecue with a strong drink in tow. And while I ate my weight in smokey, dry-rubbed ribs at the famous Central BBQ and drank my way through much of the city, I walked away from my trip dripping in the region’s rich history.

Much like New Orleans, Memphis is the type of place where you can viscerally feel its past. I can vividly remember the goosebumps that tickled my skin when I stood in the same room where the greats such as Elvis Presley, Johnny Cash, B.B. King, and Jerry Lee Lewis made music. I still feel the impact that the National Civic Rights Museum left on me, and I will never forget the way my heart tightened when I saw where the great Martin Luther King Jr. was assassinated.

Memphis is extremely unique. It is cool and weird. It is old and new. It is big and small. And with its investment into its convention center—and did I mention it’s a foodie paradise—the Tennessee town is on the cusp of becoming one of the next big must-visit tourist attractions.

For the busy executive who finds themself spending a couple of days in the Home of the Blues, here are a few must-haves for your getaway. 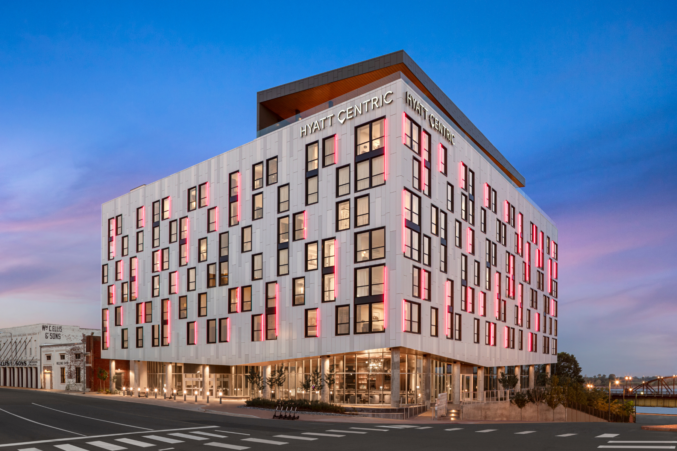 The Hyatt Centric Beale Street is part of the One Beale development in downtown Memphis.

With a $200 million investment into the city’s Renasant Convention Center, downtown Memphis is seeing a lot of growth right now. Hyatt recently unveiled its Centric Beale Street property—the only hotel on Beale Street—and has announced plans to open its first U.S. Caption hotel and a Hyatt Grand in the vibrant neighborhood.

Part of the One Beale Development, the hotel has 227 guest rooms, which include 12 suites, as well as the only resort-style pool experience in the downtown area. 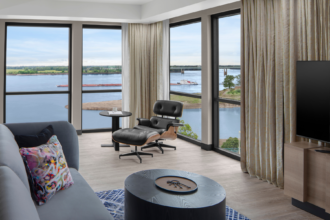 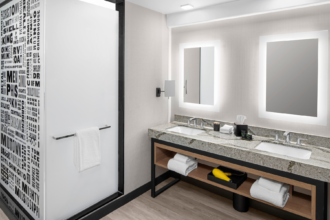 With Mississippi River views, high-end dining, and an in-room rainfall frosted glass shower etched with hip Memphis staples (such as iconic buildings, famous names, and must-try dishes like BBQ Spaghetti), the boutique Hyatt Centric Beale Street was an appropriate blend of lush and rock and roll—and yes, you need to snuggle into one of their cozy jersey-knit robes.

Fun fact, the Hyatt Centric is also the only hotel actually on Beale Street.

At the former site of the historic William C. Ellis and Sons Ironworks and Machine Shop, the newly-opened hotel makes clever nods to its industrial past—such as the vintage graphics displayed over leather headboards in the rooms and hallway carpet designed to mimic sound waves. The actual shop is now home to 9,000 square feet of meeting and event space that also cleverly uses industrial references.

Cuisine Fit for a Client

We will go over many places to eat while in Memphis—and trust me; they are all worth a visit. But if you want to wow a client or settle into something more high-end, CIMAS (pronounced see-mas) inside the Hyatt Centric is a solid choice. Not only is it the city’s first and only riverfront restaurant, but it is also headed by two accomplished chefs blending Latin-American-inspired flavors with Memphis’ southern roots. 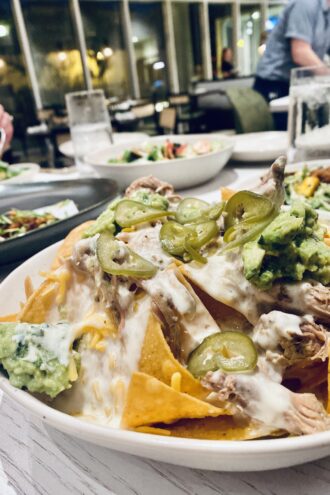 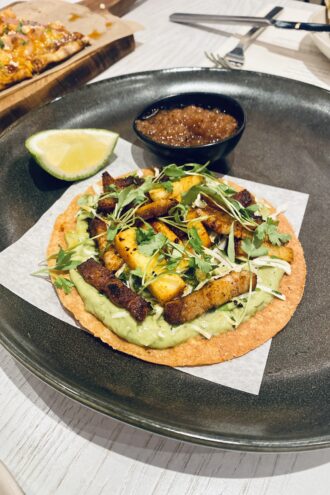 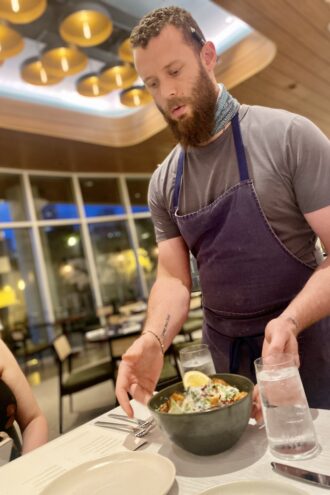 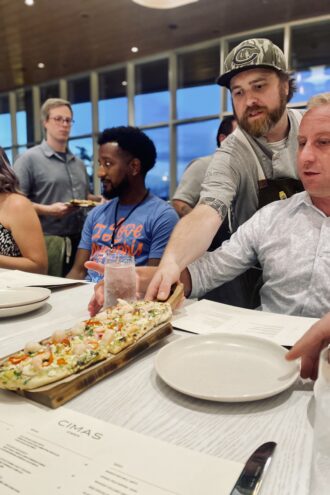 From the starter menu at CIMAS inside the Hyatt Centric Beale Street hotel in Memphis.

While there, chefs Keith Potter and Garron Sanchez treated us to a menu tasting and educated us about the local farmers they work with to create the recipes. Some highlights from the starters menu include the Pork Belly Al Pastor tacos, and the Pan Roasted Scallops served with a chorizo and elote (Mexican street corn) espelette. I enjoyed the Birria Braised Angus Short Ribs served with quesillo grits and roasted brussels sprouts for a main.

After dinner, make sure to visit the hotel’s rooftop whiskey bar Beck & Call for some drinks and views of the sparkling Hernando de Soto Bridge as your backdrop.

If you have the chance, stop in CIMAS for breakfast, as well. The Corn Flake Crusted French Toast and Carnitas Hash are a must. 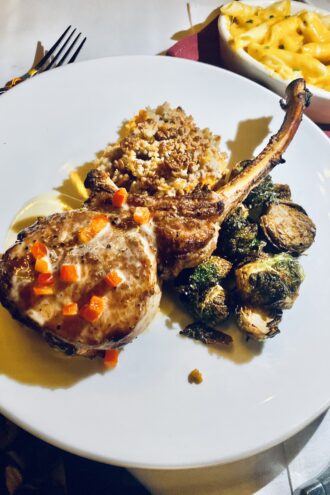 Another dining experience I was impressed with was Itta Bena, which is located above B.B. Kings’ blues club on Beale Street. Truly a hidden gem, you have to take a flight of stairs up from the back of the building into the dimly lit space. But once you’re there, it almost feels like you have been transported back in time to a speakeasy. To keep it simple, the food is divine. Get the New Zealand lamb chops or Tomahawk pork chop. The creme brulee also is delicious.

A few other stand-out restaurants not to miss include the Central BBQ—obviously, get the ribs—and Sugar Grits where I feasted on some of the best shrimp and grits I’ve had. I also really enjoyed visiting the first Gus’ Fried Chicken—even if there is a location in Deep Ellum. 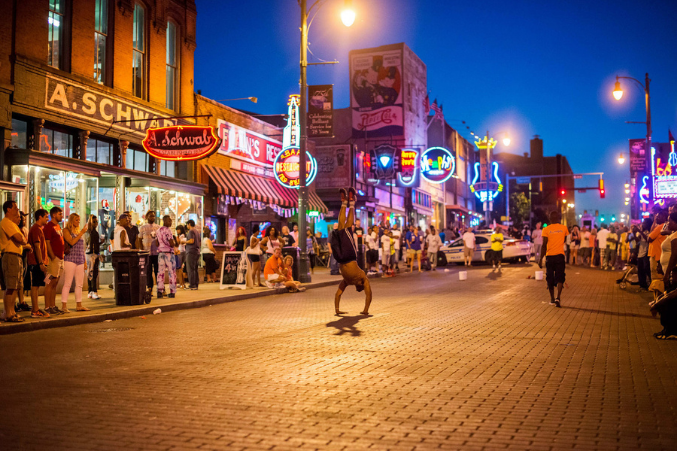 If there were only two places I could encourage you to visit while in Memphis, it would be the National Civil Rights Museum and Sun Studio.

At Sun Studio, I learned a lot about how Elvis got on the radio, saw the drums that the band U2 used to record Rattle and Hum, and sang into the microphone that greats such as Elvis, Johnny Cash, and many more sang into. 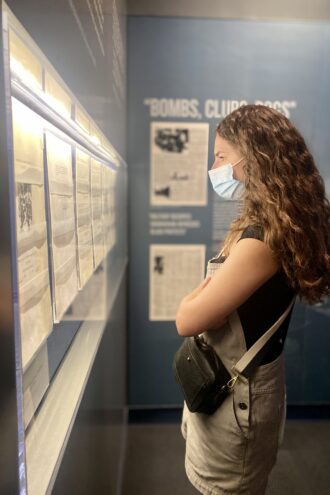 The National Civil Rights Museum surrounds the Lorraine Motel, where Martin Luther King Jr. was assassinated. Just being at the site was emotional. Inside, the incredibly detailed exhibit tracing the history of the Civil Rights Movement was detailed. Be prepared; you can spend hours there taking in all the different stories laid out in immersive vignettes. You also might need some alone time after—I sure did.

Obviously, a night on Beale Street is needed.

If you have a little more time, take a bike ride across Big River Crossing to snap a photo of yourself in both Arkansas and Tennessee; head over to Grind City Brewery for some of their delicious taps—their coconut seltzer was a favorite; and take a tour of the Old Dominick Distillery.

How To Spend an Afternoon in the Design District