Throughout the United States Armed Force’s history, there have been 3,527 Medal of Honors awarded—the highest accolade a member of the military can attain. And, after a long site selection and fundraising process, The National Medal of Honor Museum, to commemorate every recipient and immortalize their service, is readying to break ground in Arlington.

The 25,000-square-foot, $195 million museum will be located in the city’s entertainment district, which is also home to Globe Life Field and AT&T Stadium. Leading the charge for the effort is Dallas Cowboys Chief Brand Officer and museum Chairman Charlotte Jones alongside President and CEO Chris Cassidy, an MIT graduate, former U.S. Navy SEAL, and former NASA chief astronaut.

On Nov. 4, the Cowboys hosted a “C-Suite Playbook” discussion, a series exclusive to Formation–the Jones family’s coworking company, where tenants and D CEO got a behind-the-scenes look at the forthcoming museum from Jones and Cassidy. 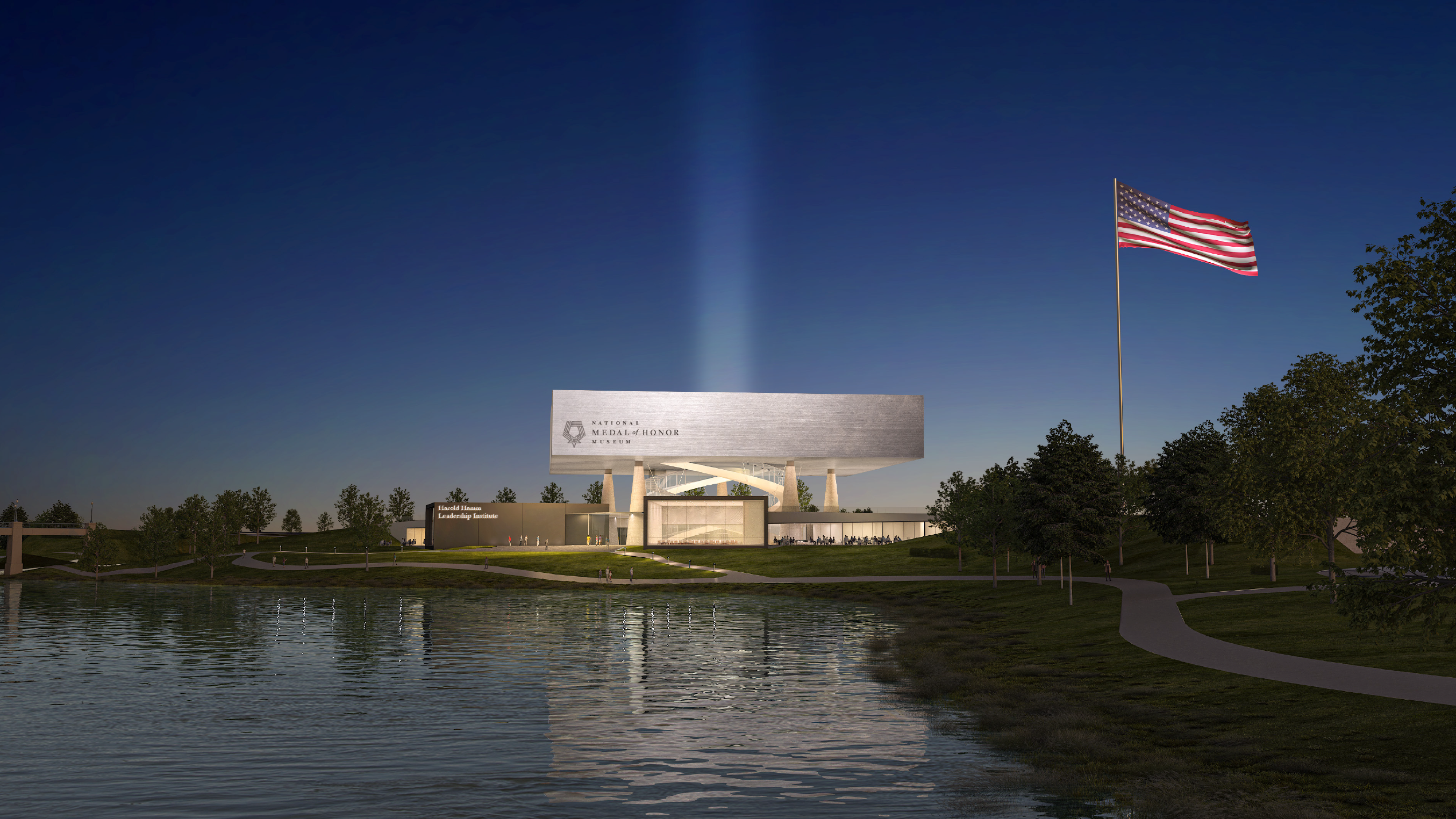 “We’re wrapping up our fundraising to present to the city that we have enough commitments, and they’ll give us the ‘all systems go,’” Cassidy said. “We have the former mayor of Arlington on our board, we’re just bringing on the current mayor of Arlington to our board, and it’s a very [collaborative] project. I think our timeframe will allow us to start construction on time and therefore open the doors in the latter part of 2024.”

To date, $116.5 million of the $195 million goal has been raised in order to construct the museum. One donor, whose late husband served as an ambassador for George W. Bush, was so touched to hear of the program she gave $20 million to the project over the phone. Donations from UFC’s Dana White to Dallas Cowboys’ Jerry Jones have also contributed to the efforts.

Chris Cassidy
Formation at The Star

Cassidy, who stars in the new Disney+ series Among the Stars, became president and CEO of the museum in August. He’s still adjusting to his new C-suite role, and even life back on earth as he spent the better part of the pandemic in outer space. He’s also still adjusting to flipping through shows and seeing his documentary.

“It’s kind of weird to see my picture on Disney,” Cassidy said. “Right next to Buzz Lightyear.”

When the museum’s concept was first pitched to the higher ups in Washington D.C., 21 cities were under consideration to host it. After decision-makers toured the country in search of the perfect spot, in 2019 they announced two cities that displayed the characteristics they were looking for: Denver and Arlington.

Leading the campaign for Denver was former Denver Broncos quarterback Peyton Manning. When the Dallas Cowboys, and especially Charlotte Jones, learned of Manning’s involvement, she thought her family’s franchise could be the ace in the hole to bring the museum to North Texas.

“So, the mayor of Arlington called me, he’s like, ‘Oh, my gosh, it’s narrowed down to the wire, they’re going to announce it in two days, do we have anything to sweeten the pie?’” Jones recalls. “That Sunday, [the Cowboys] were playing the Green Bay Packers on Fox going to about 35 million people. And I said, ‘Look, I think we can get President [George W.] Bush to attend, along with nine Medal of Honor recipients. And we can announce [the museum] live on Fox in the middle of our ballgame in front of that ginormous audience. And I told the [decision-makers] ‘I’m not about to go call the president, and then have to renege on the offer. And he said, ‘If you can pull that off, you got it.’”

The Jones family and the Cowboys prevailed, and on Oct. 4, 2019 the news was made official: Arlington would be the home for the National Medal of Honor Museum. 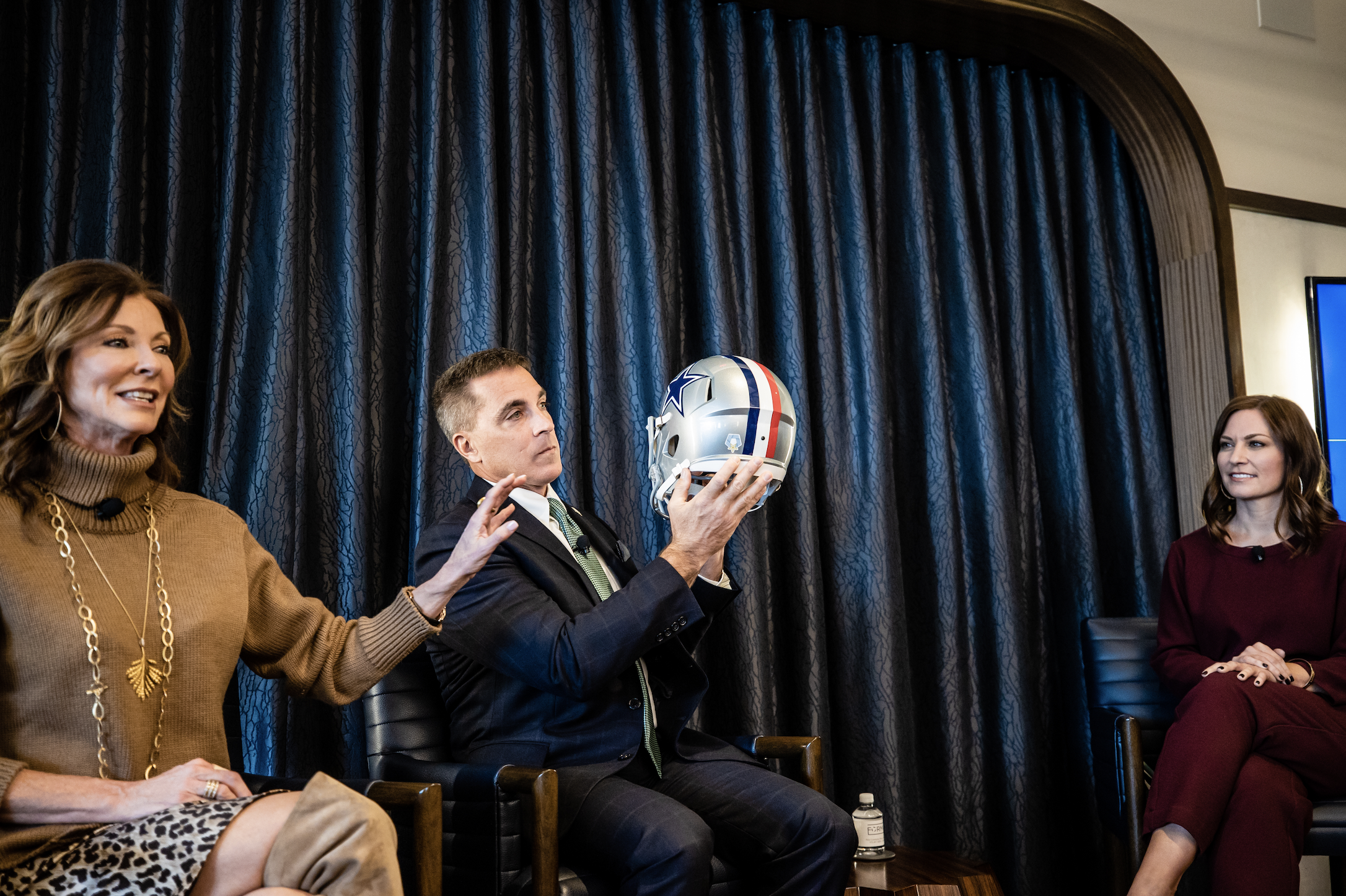 Charlotte Jones and Chris Cassidy show off the Cowboys’ Medal of Honor commemorative helmets.
Formation at The Star

Prior to the Cowboys-Broncos game on Fox, Fox NFL Sunday will tell the story of the museum and commemorate the Medal of Honor recipients while unveiling a video featuring museum directors President Bill Clinton, George W. Bush, and Barack Obama. President Jimmy Carter is also an honorable director. “It is the only bipartisan effort in our country today,” Jones said. “It passed unanimously through the House this spring, and it’s set to do so in a few weeks through the Senate.”

Alongside the museum’s displays, the National Medal of Honor Museum Leadership Institute will serve as an educative experience for the younger generation.

“Medal of Honor recipients have been going into schools to talk about patriotism and courage,” Jones said. “We are going to use this institute to be able to help them reach more, to be able to digitize the message, to spread it virtually, and expand it into every school…We are trying to grab those stories, protect them, preserve them, and spread them and the institute will be our vehicle in order to do that.”

The building’s unique design was crafted by architect Rafael Viñoly. The building will be constructed as if it is floating in midair, held up by five columns that signify the strength of the Medal of Honor recipients holding up their brothers and sisters in arms.