The Dallas Cowboys and Molson Coors have announced a 10-year, $200 million partnership extension that will usher in the fourth decade for Molson Coors as the sole supplier of alcoholic beverages for the Cowboys.

The announcement was made on Sept. 7 at the ribbon cutting of the new Miller LiteHouse, AT&T Stadium’s latest addition to the Cowboy fan’s experience. The 87,000 square foot outdoor property is home to two beer gardens, six bars, a 70-yard turf football field, over 60 television screens, two fantasy football walls, and the biggest walk-in beer cooler in the state of Texas. The 1,200 square foot cooler will be stocked with over 10,000 beverages consisting of Miller Lite, Vizzy Hard Seltzer, Core Hydration water, and much more. There will also be plenty of snacks including popcorn, assorted chips, pickles, fruit, and more within the cooler.

It took the Cowboys and Miller Lite 18 months to plan and construct the new tailgate experience. In terms of cost, the final numbers are not in yet, but Charlotte Jones, the executive vice president and chief brand officer for the Cowboys, told D CEO, “It was a strong eight-figure deal…an investment that was definitely well worth it.”

The team brought in Nashville-based Advent to help create the look of LiteHouse. The firm previously designed the $1.5 billion Ford Center at The Star in Frisco and the $58 million Comerica Center in Frisco.

“It was really a collaborative effort between Advent, the Cowboys admin, Charlotte Jones leadership, and our team across most Miller Lite,” Adam Dettman, Molson Coors head of partnerships for North America, told D CEO.

The LiteHouse, located just a couple hundred yards away from the west side of AT&T Stadium, is a football fan’s dream. On either side of the 70-yard turf field are two beer gardens shaded by the perfect amount of trees, furnished with wooden sit-down tables and booths, couches, metal standing tables, and bar stools at each of the six bars. Everywhere you turn there are televisions, including two Texas-sized screens beyond the west end zone. Food trucks also will be on the grounds on gamedays.

When Owner, President, and General Manager Jerry Jones purchased the Dallas Cowboys in 1989, Texas Stadium was one of the few major sporting venues not to permit the sale of alcohol. “That [change] was at the top of my list,” Jones said, reminiscing on revisions he made within the Cowboys organization. 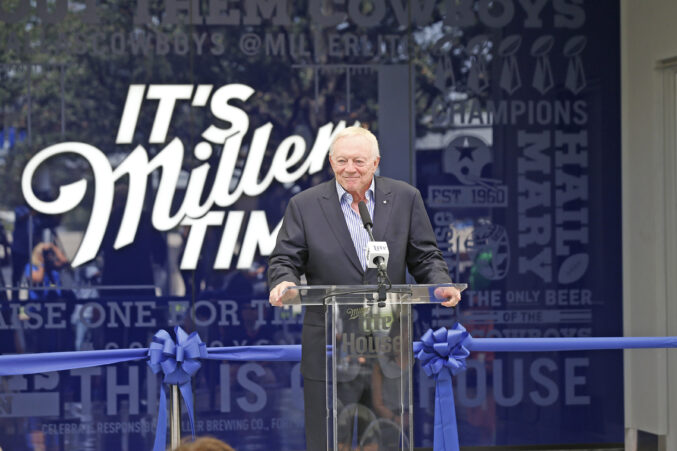 It took a two-year campaign for Jones to persuade voters to approve the sale of alcoholic beverages at Cowboy games. Beer was previously reserved for establishments formally classified as “fine restaurants.” In 1991, State Sen. Bill Glasgow introduced a bill validating city ordinances to allow the sale of alcoholic beverages inside Texas Stadium. The Senate swiftly approved the bill in a 31-0 vote.

This latest extension with Molson Coors is just another notch on Jones’ business belt that wraps around the burgeoning $6.5 billion sports franchise—the most valuable in the world.

The MillerLite House will debut its Cowboy gameday experience Thursday evening (Sept. 9). The property will usher in an estimated 5,000 fans to watch the road matchup between the Cowboys and Tampa Bay Buccaneers.

The main attraction might be the game on the 60-plus screens, but what has the Cowboys and Miller Lite most excited is that Texas-sized cooler.

“There have been many times I’ve been drinking beer and wanted to see what it might feel like to be in [an] ice-cold cooler,” Jones said. “And now, all of a sudden, we’ve got it here.”