Kellie Jasso is a preconstruction manager at Balfour Beatty. She has been with the construction company for nearly a decade and shares her experiences with struggling with coming out in the workplace and coming full circle to champion diversity and acceptance in the workplace.

“In college, I chose to hide my sexuality and did so for many of the same reasons other young LGBTQ+ people do. I simply wanted to be accepted for who I was. 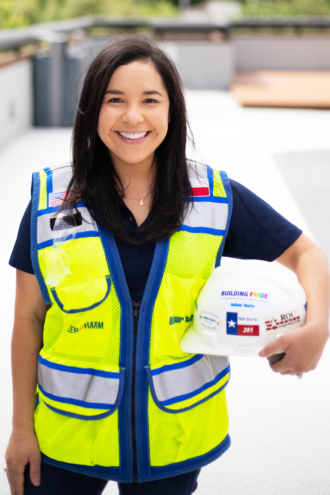 “I didn’t want my sexual preference to make my friends uncomfortable or people to think of me any differently than they had before. Over time, however, it broke me down mentally to portray myself as someone I was not. By the time I was looking for internships, I had found myself longing to work in an inclusive and accepting environment where I could be unapologetically gay.

“I wanted to be my authentic self so much that I practically jumped when I received the opportunity to move to Dallas and intern with Balfour Beatty.

“I was overwhelmed and excited all at once. I didn’t know anyone in Dallas other than the friendships I had made with my intern classmates. Little did I know that my first internship, and the friendships I formed, would leave a lasting mark on my life and, later, introduce me to my future wife.

“A year later, I accepted a position as a project engineer with Balfour Beatty. I knew Balfour Beatty was a great company to work for based on my internship experience, but I was still hesitant to reveal my sexuality in the workplace. Although I had made great friends and knew they would be accepting and supportive, I wasn’t sure if the company would fully support and protect me based on my sexual preference. I was honestly terrified of losing a job I loved and being torn away from the friends I had come to cherish.

“At the time, I didn’t personally know a woman in a leadership role at Balfour Beatty, much less one who identified as a lesbian. I thought that moving to a new city with a fresh start would solve my problems, but I had just inherited a new set of very real fears shared by many members of the LGBTQ+ community. I even found myself wondering if my benefits would extend to an LGBTQ+ family or if I’d face bias around, and be passed over for, opportunities because of my sexual orientation. These are all everyday worries that many LGBTQ+ people feel when they are closeted at work or, sadly, even if they are ‘out’ at work.”

Ripping Off the Band-Aid

“For most, coming out in the workforce is a difficult and very personal decision. I struggled with it for a long time and tried to convince myself that being out with friends and family would be enough. As time passed, I knew that I couldn’t be the best version of myself at Balfour Beatty until I felt comfortable in my own skin. This led to my ‘rip the Band-Aid off’ decision to bring a date to my company Christmas party. To my surprise, I was welcomed with encouraging words and excitement, a milestone that changed everything for me.

“Were there people who disapproved? Maybe. But for the first time in years, I honestly stopped caring what others thought, which released so much pent-up anxiety and fears seemingly overnight. I started focusing on what I loved about my job and why I chose to pursue a career in construction. It meant a lot to me to be recognized based on my work ethic and merit versus what I thought I would be judged for.”

“In 2020, Balfour Beatty accomplished a DE&I milestone when it launched the Building PRIDE employee affinity group, representing the LGBTQ+ community and allies within the workplace. It was a true highlight of my career when I was asked to join the inaugural team.

“I was inspired to connect with LGBTQ+ employees from across the business and work toward a common mission: Strengthening Balfour Beatty as a diverse and inclusive company that encourages a culture of respect for all sexual orientations and gender identities to better reflect the communities in which we work, live, and play.

“Balfour Beatty also hosted an inaugural Diversity Equity and Inclusion Together Allies Summit, which consisted of company teammates across the nation tuning in virtually to nearly 11 hours of DEI-dedicated conversations and programming. It provided meaningful peer-to-peer discussions and roundtables led by our affinity groups, Building PRIDE, Connecting Women, and the Network of Black Leaders and Executives.

“We discussed intersectionality of race, gender, and sexuality in the workplace, professional development for women in construction, microaggressions, and the importance of straight allies, among other meaningful topics.”

Being the Exception to the Rule

“To bring everything full circle, I recently got engaged to that same woman I initially met years ago during my internship, and we celebrated with all of my Texas teammates at our quarterly meeting—a surreal moment when I look back over the last 10 years. I’ve been lucky enough to have incredible mentors and given opportunities to step up at work, within my local community, and as an LGBTQ+ representative. There is no doubt my journey is a success story.

“It’s also important to acknowledge that I am the exception, not the rule. There are so many stories of harassment and discrimination in the workplace that often go untold because of the fear of retaliation or losing one’s job.

“I ask that employees and, most importantly, employers really look in the mirror and ask themselves if they’re doing everything they can to listen and support those with experiences and perspectives that may be different than their own. Change starts at the top, and the support disseminates from leadership to the employees.”

CRE Opinion: Health And Safety Measures We Adopted To Stop The Spread of COVID-19