For Design Director Hamilton Hedrick, it typically involves securing the right studio, hiring hair and makeup help, scouring and purchasing backgrounds, setting up lighting, and having a full crew on board. None of that was possible this year, due to COVID-19. So, we had to get creative. Thankful, that is Hamilton’s area of expertise.

We decided this year to focus on next-gen leaders who are taking Dallas-Fort Worth into the future. But, to adhere to social distancing requirements, we had to photograph them in six separate shoots. 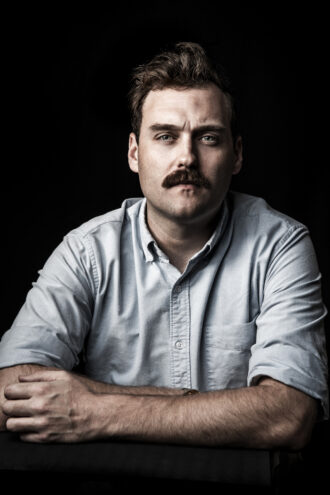 “In a perfect world, we would have had them all together so they can engage with one another and feed off each other’s energy,” Hamilton says. Instead, the cover models were shot by our photographer in multiple poses. “We didn’t map it out in advance,” Hamilton says. “We didn’t have an idea of who was going to look better where, and who would be standing or sitting. We shot everyone in three or four positions and then just reviewed everything, flagged the best facial expressions and body language, and built it backwards. There’s no telling how many total frames there were when all was said and done.”

The photo sessions happened over two days at D Magazine Partners’ in-house studio downtown. Because the studio was being used by others, Hamilton and Sean couldn’t get in to prepare until the night before. They pulled together a set from scratch. “We flipped around a flanking wall and showed the back to add texture,” Hamilton says. “We purchased one seamless but everything else was from previous shoots, sourced then and there.”

The six cover models were all great sports. They were (from left in the above photo) Carter Tolleson of Tolleson Wealth Management, Gabrielle Madison of Thomson Reuters, Jamie O’Banion of BeautyBio, John Paul Merritt of Pony Oil, Meyling Ortiz of Toyota Motor North America, and Byron Sanders of Big Thought. “Modeling in and of itself isn’t easy, and it’s especially odd to be solo on a set designed for six people and have to pretend that you’re not alone,” Hamilton says. “They couldn’t have done a better job.”

A key part of pulling it off was hiring the right photographer. We knew we needed someone who would have the confidence to execute. Hamilton chose Sean Berry, who consistently does exceptional work for D CEO. He had the challenge of lighting and thinking about shadows and size and scale, and the balance of the height and depth of people. “It’s a testament to Sean’s talents,” Hamilton says. “He did all of the lighting and shadowing and painted everything in, with Natalie Goff on our team doing final touch-up. Looking at the end result, you wouldn’t have known that it was pieced together like a puzzle.”

To learn more about the Dallas 500, click here. To  purchase a copy of the 2021 edition, click here.