Officials with the Dallas Sports Commission, FC Dallas, and the Dallas Cowboys met virtually with FIFA World Cup representatives in Zurich this morning to pitch the idea of bringing the largest sporting event in the world to North Texas.

“When I was thinking about building AT&T Stadium, I knew we wanted a great place for 100,000 people to have a unique experience,” Jones said. “We’re ready to do what we can to make this World Cup the most special of them all. I was a close, personal friend of Lamar Hunt. I’m aware of his vision for soccer in the U.S., and I’m proud to be a partner with his family on this bid to host the World Cup.”

Following the call, Estis, Hunt, and Paul talked with D CEO and other media to recap results.

If North Texas wins the opportunity to host the cup, it would mean a significant economic boost for the region.

“Our initial calculations were done about two years ago and estimated about $400 million in economic impact and 3,000 jobs,” Paul said. “But that’s a little bit of a moving target or sliding scale. … As we get a little bit clearer picture from FIFA, we’ll be able to tighten up that number and provide some good analysis. But right now, we’re definitely anticipating over $400 million in economic impact.”

Dallas is one of 17 potential U.S. host cities, stretching from Los Angeles to New York. The region offers two distinct advantages, according to Hunt. 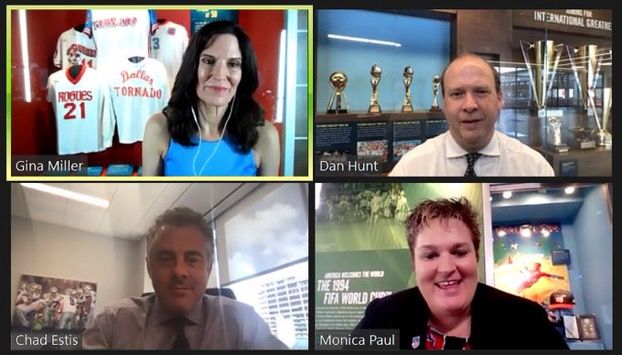 “Part of our presentation [to FIFA] was the ethnic diversity in Dallas,” he said. “We have a very rich culture in soccer history and passionate fans for the global game. Another sales point is the affordability in this market. FIFA wants as many fans to have this experience as possible. Tickets are expensive, but you have to be able to stay in hotels, rent cars, have public transportation, and these are all things that we as a committee are prepared to do to make it accessible so that all fans can enjoy the beautiful game.”

In 1994, Dallas hosted six FIFA World Cup matches at the Cotton Bowl at Fair Park. The six matches were the most successful to date in terms of fan attendance, with a combined 3.5 million people packing the stand—an average of nearly 69,000 per match.

“The ’94 World Cup was so critical for launching Major League Soccer, providing jobs for people in this community, growing youth soccer, but we think 2026 is going to be even bigger,” Hunt said.

The 2026 FIFA World Cup will be the largest cup to date, featuring 48 national teams and 80 matches—60 in the United States, 10 in Canada, and 10 in Mexico. FIFA will visit each of the 17 potential U.S. host cities before making a final decision in mid to late 2021.

“Sports in Dallas are woven into the fabric of our culture,” Paul said. “By hosting the World Cup, we have an opportunity to showcase North Texas to an international audience and generate a huge economic engine for our region.”

One in an occasional series.
By  Matt Goodman
North Dallas