Construction for a high-speed train that will zip between Dallas and Houston at more than 200 miles per hour is still in the works. But with costs estimating almost $20 billion more than initially planned, Texas Central might need the help of stimulus money.

In a recent letter to Texas State Sen. Robert Nichols, Texas Central’s Chairman (and an investor), Drayton McLane, Jr. said the project is seeking funds outside of private equity, saying, “we have certainly hit a snag with all the difficulties of the coronavirus.” The letter was obtained by the Dallas Business Journal.

The company laid off 28 employees in March, and the Global Financial Markets hit a low, too, leaving its upcoming recovery—or lack thereof— to determine the verdict: Will the train need a stimulus fund?

Ever wonder where exactly the high-speed train line will be built? See the map here: https://t.co/L57zyZGkxN pic.twitter.com/MGRELxrmca

Aside from exploring funding from government loan vehicles—including Railroad Rehabilitation & Improvement Financing and Transportation Infrastructure Finance and Innovation Act—Texas Central may tap into government loans. According to Texas Central CEO Carlos Aguilar, the company has not applied for funding through the CARES Act.

“We feel that between Japanese government funding and the monies we hope to receive from President Trump’s infrastructure stimulus through the Department of Transportation, along with private equity that the project still has a great opportunity, is viable and can be construction-ready this year,” McLane added in his letter.

The project will create an estimated $36 billion in economic benefits statewide over the next 25 years, according to a news release. Texas Central anticipated it also would create 10,000 direct jobs per year during peak construction and 1,500 permanent jobs when fully operational. 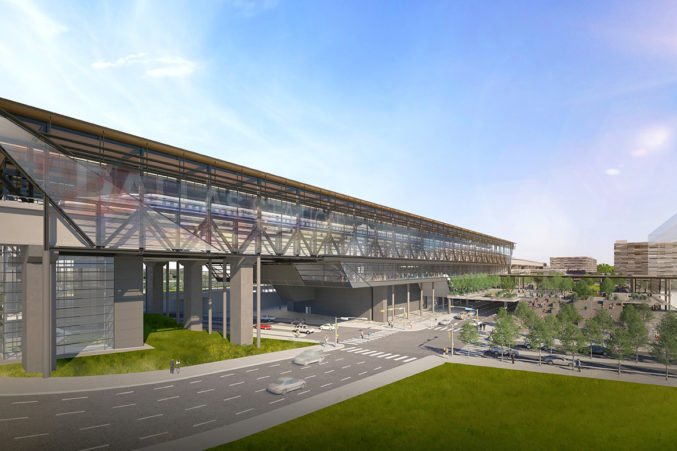 The exterior of the Dallas station that would be located in the Cedars neighborhood on the southern edge of downtown.

Early on, Texas Central said the bullet train would be privately funded—an idea that has drawn skepticism since inception, along with its ability to be profitable.

In 2017, Peter Simek wrote a D Magazine article titled Has the Texas Central Bullet Train Gone Off the Rails? In it, he points to Travis Korson, a senior fellow with Frontiers of Freedom, a conservative Washington think tank, who didn’t believe then that the numbers made sense and that its growing budget and inflated ridership projects suggest the privately funded rail project may not be profitable. (Click here to read it)

At the time, proposed construction costs had ballooned from $10 billion to $16 billion. Currently, on Texas Central’s website, it says the system will cost more than $12 billion to construct.

“We also were told the project would be privately financed, yet now it is revealed Texas Central is seeking taxpayer stimulus money to build it. To publicly promote to the media, to elected officials, and worst of all to the citizens of Texas the cost of the project as $20 billion when they know it to be more than $30 billion and that the project would be privately financed while they ‘hope to receive from President Trump’s infrastructure stimulus through the Department of Transportation’ to build it just reveals their true character and intentions about this project”

Aguilar told the DBJ that the $30 billion figure was “a conservative estimate of ‘all in’ numbers.”

The train’s still on the tracks toward its construction, though, as the company hit a breakthrough in an essential legal ruling just one month ago: The Thirteenth Court of Appeals ruled Texas Central and its subsidiary Integrated Texas Logistics as legal railroads.

The decision reversed a previous one made in the 87th district of Leon County. Designating the project as a legal railroad is almost as powerful as what happens next. All railroads have the right of eminent domain, which means that Texas Central can acquire all the land it needs. Project opponents are appealing the decision to the Texas Supreme Court.

In response, Aquilar said the “decision confirms our status as an operating railroad and allows us to continue moving forward with our permitting process and all of our other design, engineering, and land acquisition efforts.”