Dallas Mavericks owner Mark Cuban began the conversation with a straightforward question: When did black women gain the right to vote?

He then shared the answer: the year after President Donald Trump was old enough to vote for the first time—1965.

“When we talk about systemic racism and talk about challenges and hope, and the past, we talk about an African American community who couldn’t vote to change the country, the states, the cities they lived in, until 1965,” Cuban told a group of 100 people who gathered at the American Airline Center’s Victory Plaza on June 6—the day George Floyd was laid to rest.

Called “Courageous Conversations,” the event followed mass protests and public outcry over the death of George Floyd and others at the hands of police—an injustice Cuban said makes his stomach churn. The event was held to give team personnel an opportunity to speak about their experiences dealing with everyday and systemic racism. Also participating were civic and community leaders, police officers, and invited members of the media. 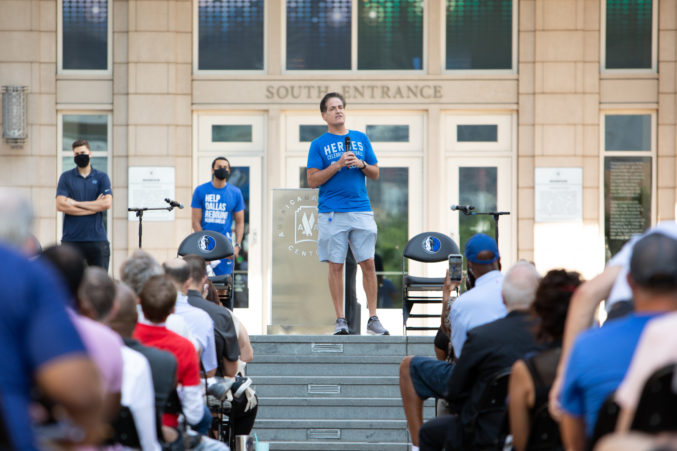 Mark Cuban leads a conversation about systemic racism on June 6 outside of American Airlines Center. (Image courtesy of Dallas Mavericks)

Frustration. Anger. Sadness. Defeat. These are just a few words expressed by members of the Dallas Mavericks family when asked what they felt after watching the nearly nine-minute video of a Minneapolis officer who kept his knee on the neck of Floyd as he cried out for his mother.

“To see the look in those officer’s eyes as they took that man’s life hit hard,” said Mavericks Assistant Coach Stephen Silas. But, he added, the video awakened America, “All of this would not have happened without the video.”

Dallas Mavericks Vice President and General Counsel Sekou Lewis said the video hit home. “When I saw George, I saw myself,” he said.

Lewis grew up in a Midwestern suburb with a “loving, caring family” where he always felt like a “model citizen … an agent of change.” But by the time he was 11, he said, a police officer reminded him of who he was: black. He experienced the fear of police drawing guns on him before he entered high school.

“When I see George, it’s a sad reminder of what my reality really is,” Lewis said.

Former NBA player Cedric Ceballos said he’s seen it all too often, and that change is long overdue: “It’s time for the white privileged to use their power against white privilege.” 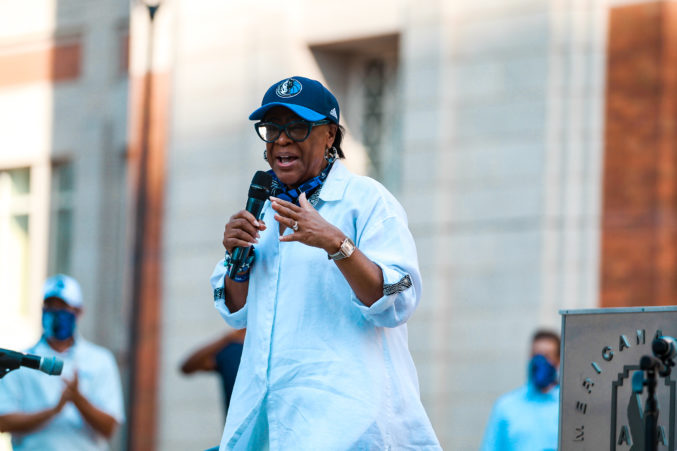 Dallas Mavericks CEO Cynt Marshall says it took her six attempts before she could bear to watch the video.

“What struck me was (the officer’s) hand in his pocket. Being cavalier,” she said. “All I could see was my husband. My nephews. My two sons. We have a problem in America that I’m optimistic we’re addressing. When I look at who’s protesting—the diversity of the people out there, and the diversity of the people in front of me right now—we’re saying, ‘We’re not going to take this anymore. We are going to have a new America.’ That’s what we’re about today.” 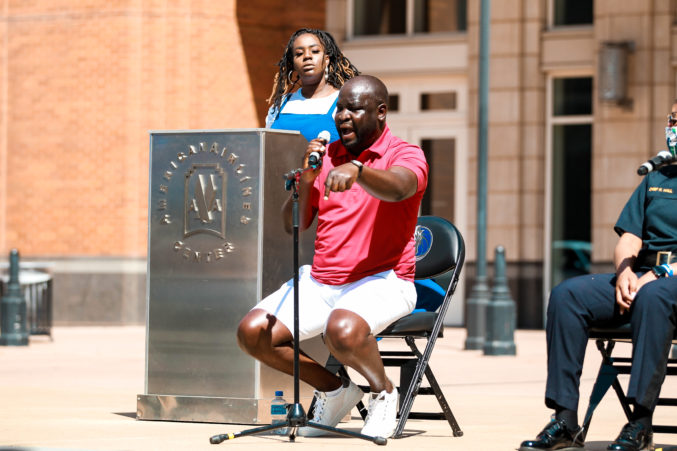 John Olajide, the founder and CEO of Axxess, tells the crowd, “Chances are, we’re not going to see this beautiful utopia on arrival that we all want in our lifetimes, but we’ve got to take steps forward. I believe this is a watershed moment, and we have to take steps to start making that change happen.” (Image courtesy of Dallas Mavericks)

“Change can’t happen unless you have a seat at the table,” said Olajide, the founder and CEO of Axxess, going on to note how frequently he’s asked, as a black leader, what he has to say about issues of inequality and racism.

“I went on a journey processing my thoughts on what I needed to say about it, and you know, it’s not just an issue for black leaders or black CEOs,” he said. “White leaders have to care about this. White CEOs have to say, ‘Enough. We’re gonna take responsibility to make our community better than what it is. We’re gonna take action to make our society a lot more just and equitable for all people, and we will get the change that we seek.

“We have to be candid that our community is not the best place to live, work, and do business for all our citizens. So we must do something about this.”

Chief Hall said her department is having similar conversations and what policing could look like as Dallas tackles issues of reform.

“I believe that for the first time in the history of policing,” she said, “there are 800,000 law enforcement officers, men, and women … and we all watched one of our own put a knee on a black man’s neck, with no regard for human life, wearing the same uniform we wear … and it made us all sick to our stomach. 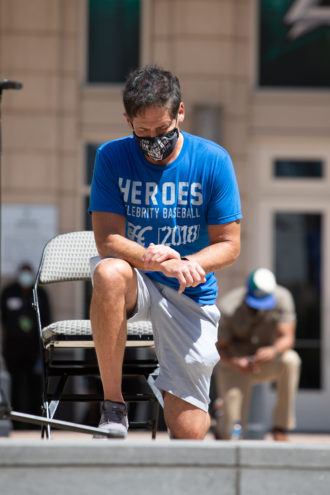 “We have not gotten it right,” Hall continued. “There have been many unarmed black men killed at the hands of law enforcement, and we must own that. We must speak the truth. Law enforcement is rooted in the oppression of black people. We have to regain legitimacy.”

The private event ended with everyone taking a knee on hot pavement as a Dallas police officer poignantly spoke aloud George Floyd’s last words. He cried out “Mama!” twice. He pleaded, “My stomach hurts, my neck hurts, everything hurts.” He asked for water and said he couldn’t breathe. Then George Floyd begged, “Don’t kill me.”

To see additional images, click on the gallery above. And to watch the event in its entirety, head over to mavs.com/conversation.