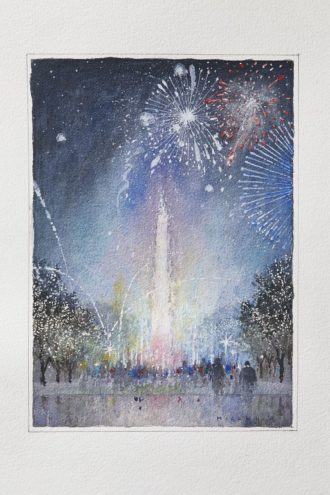 Klyde Warren Park has plans to move My Best Friend’s Dog Park from its East Lawn location to the southwest corner of Pearl Street and Woodall Rodgers Freeway. The move will make way for the Pearl Street Water Fountain to be installed in the far east end of the park–and also give dogs about 2,500 additional square feet to play in.

Klyde Warren Park first announced its plans to build a fountain with the news of its anticipated expansion 1.5 acres to the west over Woodall Rodgers Freeway toward Field Street. The fountain will light up the lawn closest to Pearl Street with choreographed water shows at night, the release stated.

The Woodall Rodgers Park Foundation, the charitable foundation that manages and operates the park, has been conducting neighborhood meetings to gather input on the new dog park, discussing everything from the playing surface and seating, to whether or not dogs (and their humans) like water features.

While the cost to move the park is to be determined, officials say it will be funded through private donations. The foundation also will take over management of the new space, which is owned by the City of Dallas.

The project is expected to begin next year.

Interestingly, the original designs for the park showed a fountain in that space, but it was never built.

The doyenne of Klyde Warren Park is more about beauty than safety.
By Tim Rogers
Parks

A Better Look at That New Klyde Warren Park Fountain

Maybe it's not such a bad idea after all.
By Tim Rogers
Tex-Mex

Mi Cocina On The Park, when it opens this fall, will have special (that is, public park legal) Mambo Taxi–like frozen "margaritas" sans tequila.
By Rosin Saez
D Magazine Directories