A surface parking lot at 601 Corbin Street will soon be the only centrally-located green space in the West End Historic District.

Just shy of an acre, the site is bounded by North Market Street, Corbin Street, North Record Street and what was previously the Spaghetti Warehouse building.

Parks for Downtown Dallas, the City of Dallas Park and Recreation Department, and the community gathered today at Dallas City Hall to celebrate the start of Downtown’s newest park – West End Square.

The new park is the second of four new priority parks downtown–Pacific Plaza opened in October and two others will be built in the near future. The four parks are being funded by $39 million in city of Dallas bonds and $63 million in private funds.

Park construction is estimated to take 12 months and cost $6 million, according to documents. 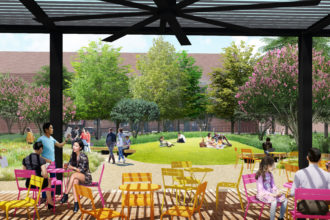 Movable tables and chairs activate the northern edge of the square facing the Prairie Gardens. Within the gardens, a larger paved area and lawn fronts the trellis, creating a spillover area for sitting in the sun during cooler days.

Architecture and design firm Corgan committed a $100,000 donation toward construction of the park.

“Corgan has a long history in the Dallas area, and with more than 400 employees in the West End, we are excited to invest in shaping the urban fabric of the city where we live, work, and play,” Corgan president Steve Hulsey.

“At Corgan, we believe in the power of place—in the marriage of built environments and intentional outdoor spaces like this that shape a rich, vibrant streetscape and make a meaningful difference in our neighborhood and our lives. Corgan has a long history in the Dallas area, and with more than 400 employees in the West End, we are excited to invest in shaping the urban fabric of the city where we live, work, and play.” 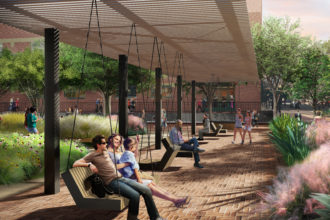 The porch swings, facing North Record Street, will be interactive and social feature that supports play and activity for all age groups.

The Downtown Dallas, Inc. (DDI) Foundation also committed $300,000 to ensure a water feature is included in the park.

“The West End has long needed a community gathering green space, and we thank Parks for Downtown Dallas for making it happen with their generous matching gifts,” said Downtown Dallas, Inc. CEO and president Kourtny Garrett. 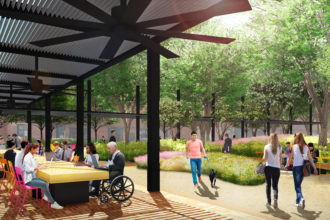 An outdoor workroom, located beneath the shade canopy, will provide a 50-foot long table fitted with wireless charging stations, outlets and Wi-Fi. The workroom includes overflow space in the gardens, envisioned as a more intimate workspace for individuals and smaller groups.

“The DDI Foundation is pleased to make it’s very first grant to Parks for Downtown Dallas and West End Square for a water table that incorporates three different modes: a reflecting pool for still days, bubblers on windy days, and a cloud mist for cooling during hot days. The water feature will help make this innovative park welcoming to everyone living, visiting, and working in Downtown Dallas.”

The design features an outdoor workroom, porch swings, and a u-shaped steel trellis envisioned as a flexible armature for a plug-and-play approach to technologies that may be incorporated over time as the Square’s uses and needs evolve. 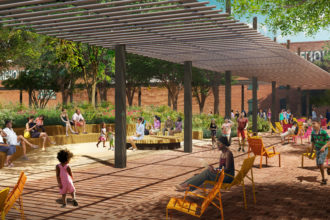 A seating step feature fronts the eastern side of the square, creating a space for larger gatherings. The frame along this edge is designed to host temporary installations.

In recent years, the West End–recently rebranded as the Dallas Innovation District– has experienced growth in residential development, as well as an influx of both new and adaptive reuse in commercial developments geared towards creative and innovative companies.

West End Square, a little less than one acre in size, is bound by Market Street to the east, Corbin Street to the south, North Record Street to the west, and the old Spaghetti Warehouse building to the north. 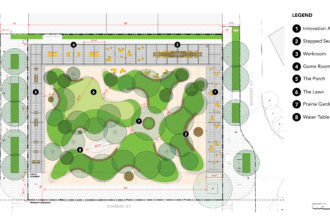 “Strong public-private partnerships involving community leaders like Corgan and Downtown Dallas, Inc. are critical to help the City of Dallas create four new Downtown parks,” said Amy M. Meadows, CEO of Parks for Downtown Dallas. “This shared vision will result in a network of parks that stitch our urban neighborhoods together and contribute to a more livable, environmentally sustainable future for Dallas.”

Here are the main design elements within West End Square: