Business luminaries from across the region streamed into the Hyatt Regency yesterday for Dallas Citizens Council’s annual meeting, featuring an on-stage interview of former U.S. Secretary of Defense James Mattis by David Rubenstein, Bloomberg TV host and co-founder of The Carlyle Group. 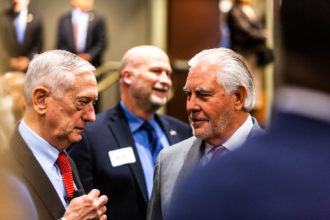 Mattis with “Saint Rex of Texas”

Among the 1,000 or so in attendance: Ross Perot Jr., Lyda Hill, Brint Ryan, Roger Staubach, and Rex Tillerson—or, as Mattis called him, “Saint Rex of Texas.” The former ExxonMobil chief and ex-U.S. Secretary of State was looking quite relaxed in retirement—and sporting a beard.

Mattis talked about his love for the people of Texas and the way they can disagree but still get along and work together to accomplish important things. He cracked that when he landed at the airport, he asked an airline worker if he could declare political asylum. He also thanked Dallas Citizens Council for hosting him, joking that after some of his public remarks, he doesn’t get invited to many things involving “polite company” these days.

Rubenstein asked Mattis if he had any regrets, either about taking the meeting with President Trump that led to his appointment as the nation’s 26th Secretary of Defense—or his decision to step down after two years on the job. “I don’t live a life of regrets,” Mattis answered. “I look forward—like Dallas.” 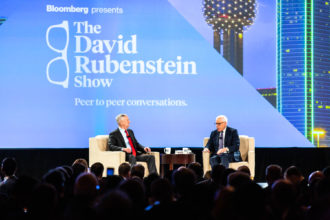 The Beck Group’s Fred Perpall, chairman of the DCC, spoke about the organization’s new mission: bridging the gaps that exist in the community and improving Dallas for all citizens. “We believe that if we as a business community can lead and focus on and invest in a few things that matter, we can build a better Dallas for all of us,” Perpall said.

Its strategic priorities for the new year:

“Dallas is a prosperous city,” Perpall said. “We have succeeded in attracting business and maintaining a vibrant economy by any standard. Yet we know we face challenges common to all large cities, and some challenges that are unique to us. As we continue to seek the best possible future, let us learn from history, from the positive things we have accomplished, but also some of the outdated things we still face. We can redefine what Dallas is.”