The construction of a high-speed train connecting North Texas and Houston could begin as early as next year, following an agreement between developer Texas Central and one of the nation’s top train system installation firms.

Mass. Electric Construction, a subsidiary of Kiewit Corporation, will work alongside Texas Central, the private company behind the project, to define the scope, execution plan, schedule, and price for a construction contract, which is expected to be signed later this year.

To date, Mass. Electric has completed over $4 billion of transportation projects nationwide, including the Phase 2 Houston LRT, the DART Green Line in Dallas, Union Station in Denver, and the Miami International Airport Automated People Mover. 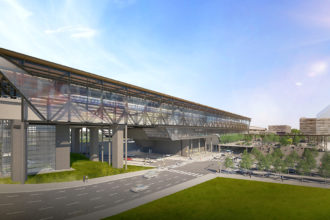 The exterior of the Dallas station that would be located in the Cedars neighborhood on the southern edge of downtown.

The Texas system will be based on Central Japan Railway’s Tokaido most-advanced Shinkansen N700S train system. If built, it would connect Houston and Dallas in under 90 minutes, with one stop in Brazos Valley.

Mass. Electric project director Mark Willians says the company is excited to play a critical role in the project.

Specifically, under a Core Systems Installation Agreement, Mass. Electric would install the systems that supply and distribute electrical power for running the train and related equipment, signaling, and control of the trains, and communications, to ensure the trains, the tracks and operators all communicate with one another and with network operations. 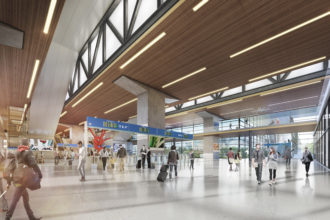 The entrance of the station in Dallas.

The core system the company will install is a key component of the N700S Shinkansen technology being deployed for the Texas High-Speed Train and part of what makes this project so unique. Using a “complete system approach” means from the beginning, everything is designed and engineered to work together as an integrated unit–the trains, the infrastructure, and the supporting high-speed rail technologies.

“The Shinkansen total system approach has created performance unparalleled in the industry, having transported over 10 billion people safely,” said  Texas Central CEO Carlos F. Aguilar. “Marrying the experience of Mass. Electric, with the dedication to (the) safety of an integrated system, brings the project one step closer to construction and operation.”

The project will create an estimated $36 billion in economic benefits statewide over the next 25 years, according to a news release. Texas Central anticipated it also would create 10,000 direct jobs per year during peak construction and 1,500 permanent jobs when fully operational.

Texas Central hopes to break ground as soon as June of next year.

It would be approximately six years before the first passengers could take the high-speed train between Dallas and Houston.