A Farmers Branch-based company in the secondary mobile device space edged out 99 other entrepreneurial businesses at the SMU Cox Caruth Insitute for Entrepreneurship’s Dallas 100. 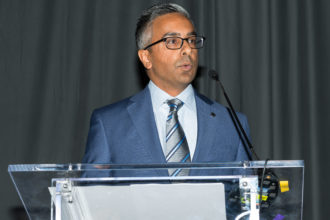 Ontronics rose to the top position after placing fourth at last year’s event. Sales for the company increased exponentially in 2019 and more than 300 percent over the previous three years, said Simon Mak, the Linda A. and Kenneth R. Morris endowed director of the Caruth Institute for Entrepreneurship.

“Admittedly, Ontronics is not a household name, yet with that kind of growth, this company is doing its part to contribute to a vibrant Dallas area economy,” Mak said.

Nearly 1,000 members of the Dallas community celebrated at the Omni Hotel–blaring fog horns, clapping, and some shooting confetti cannons–as the fastest-growing, privately-held Dallas companies were listed off.

Moeenuddin founded Ontronics in 2000 while studying business management at the University of Texas at Austin. The idea, he said, came from his time working at Sprint, where he found himself making more money selling used phones than products and services.

Today, Ontronics has 200 employees worldwide with offices in Dubai, London, and Hong Kong. 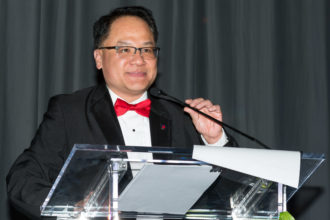 Simon Mak, the Linda A. and Kenneth R. Morris endowed director of the SMU Cox Caruth Institute for Entrepreneurship

This year’s winning companies collectively generated $3.5 billion in sales in 2018, according to Mak. Collectively, the companies grew at an average annual growth rate of 82 percent from 2016 to 2018. They created almost 7,000 jobs in that same period.