On the heels of the recent announcement that McCarthy Building Companies is again working on the WINGs expansion of Southwest Airlines, the national construction company has disclosed plans to build a state-of-the-art helicopter pilot simulation training center in Grand Prairie.

McCarthy is working with HPM Leadership and the world’s no. 1 helicopter company, Airbus Helicopters Inc., and Helisim (a French joint venture of Airbus, Thales AVS, and DCI) on the project. The Helisim Simulation Center will be the company’s first helicopter training facility in North America and serves as its North American headquarters.

“We are pleased to bring our aviation and specifically, simulator facility experience, to bear on this exciting Helisim project,” said Joe Jouvenal, senior vice president of McCarthy. “As we mark the project’s topping out, we are excited to deliver a state-of-the-art facility for pilots from around the world to train in.” 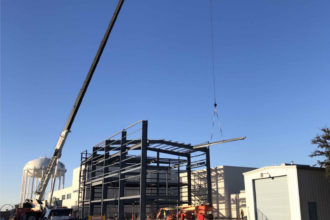 The Helisim Simulation Center will be the company’s first helicopter training facility in North America and serves as its North American headquarters.

McCarthy broke ground in May 2019 and is expected to complete the project in March 2020.

The pre-engineered metal building includes three levels with 6,000 square feet of office space, a 12,000 square-foot simulator hall with a tech room, as well as computer rooms and workshop and meeting spaces.

In First Public Statements Since Southwest 1380, Pilot Tammie Jo Shults Talks Getting Back To Normal