That interesting roof-top bar on North Henderson Avenue will finally have a restaurant at its anchor.

Jack & Ginger’s, an Irish pub nestled below the Caribbean-inspired 77 Degrees, is slated to open its third Texas location this November. The restaurant is also open in Austin and Houston. 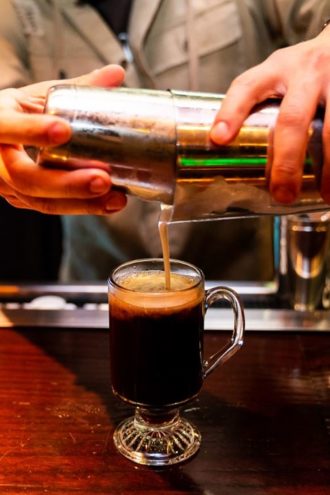 Created by Austin-based Union Venture Group (founders of sibling concept 77 Degrees), the 5,000 square-foot bar at 2107 North Henderson Ave. is checking all the marks when it comes to having a pub vibe: exposed brick, dark woods, hues of gold and green, more than 20 large-screen TVs, an open-air Biergarten patio, and an extensive drink offering that pays homage to Ireland.

From the kitchen, expect classic pub fare and comfort foods—including a range of shareables, mains, handhelds, and sweets.

The menu also includes a weekday happy hour from 3 to 7 p.m., alongside weekly specials and Sunday brunch. Regular business hours from 3 p.m. to 2 a.m. Monday through Friday and 11 a.m. to 2 a.m. Saturdays and Sundays.

Initially created by brother-duo Jeff and Daren Van Delden in 2002, Union Venture Group has over 20 projects in Austin and Houston, such as The Rose Room, St. Genevieve, and Park on Lamar.

The Cedars Union Was Robbed Over the Weekend