At the Weitzman Annual Forecast event, Jim Sud, executive VP of growth and business development at Whole Foods said that Amazon has told him and his team to step on the gas.

After escaping choppy waters as a public company in the arms of the Seattle-based e-commerce titan, Sud said Whole Foods has been given the green light for growth.

“In the two years prior to the merger, because of competitive pressures and because of a slowdown in our comparable store sales, we slowed our growth,” Sud said. “And at one time, I think we had 93 stores in development, and we stopped signing leases and stopped opening stores. But when Amazon acquired us, they sort of said: ‘You’re on. Start growing again.’”

Amazon’s new grocery subsidiary has come a long way from its days as the Safer Way nestled in a three-story house on Rio Grande Street in Austin.

“If I were to tell you that what Whole Foods has become today was part of a grand plan, I would definitely be lying,” Sud said. 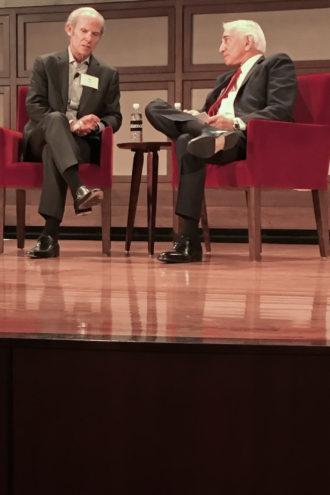 Sud said last year’s groundbreaking merger with Amazon has allowed the grocery chain to focus on internal and external growth initiatives it couldn’t spend the money on without kneecapping profits when it was a public company.

“Even though we’re part of a public company, we’re not a public company,” Sud said. “So now we have the freedom to operate the business in a manner that it needs to be operated without the pressure of quarterly earnings, and that has been really great for the management team to be able to focus on the business and do the right things.”  A new, unified point-of-sales system on the way, Amazon’s Prime Affinity program, two price cuts, and the go-ahead for more stores are all laying the stage for a big growth push that Sud was careful not to reveal too much about. But in the hot and quickly advancing grocery market, a deep pocket such as Amazon’s is integral to wresting market share from competitors through competitive pricing, new stores, and technological advancements.

Whole Foods’ primary pain point with customers in the past was its prices, but thanks to price slashing made possible by Amazon, Sud said there has been a notable improvement in customers’ perceptions of Whole Foods’ affordability—and further price cuts may be on the way.

Sud said one thing is for sure: Whole Foods will be seeing a new crop of stores and openings in the near future.

“We’ve been focused, the last year and a half, on rebuilding the pipeline,” he said. “Our pipeline had gone down from 93 stores to I think about 50 to date based on the number of stores we opened and leases we signed…so we’ve been reaccelerating our growth.”

In terms of strategy, Sud and Whole Foods are going to stick to their old playbook of prioritizing demographics, psychographics, and visibility. It doesn’t seem like cost is going to be much of an issue when it comes to site selection.

Competition in the grocery market, the quintessential American retail anchor, is fierce to say the least. Sud went so far as to call it the most competitive sector in retail. With recent advances in technology like click-and-pick-up, Sud said the sector is seeing the kind of momentum fast food restaurants did upon the advent of the drive-thru window.

As grocers race for the Holy Grail of a shopping experience that soundly wins customers’ hearts, you can expect a no-holds-barred, knock-down, slug-out fight in the sector for the foreseeable future.