The Dallas hotelier and philanthropist left an indelible mark on the city, bringing international sophistication to Dallas, while simultaneously sharing Texas’ charm with the rest of the world, as the original owner of The Rosewood’s Mansion on Turtle Creek and The Crescent. She was the founder of Rosewood Hotels and Resorts, which debuted its first hotel in 1980. It grew to encompass 22 hotels and resorts in seven countries, and was sold in 2011.

“She was a bold and visionary leader who built one of the most iconic buildings in Dallas,” says John Zogg, president of The Crescent. “Known for her extraordinary graciousness, she led the hospitality and real estate industries in establishing world-class service in every project she touched.”

“I’ll always remember what a great host she was,” Zogg says. “She took such care of her guests. She made you feel as if you were part of her family. That’s just the lady she always was.”

“In the hotel business, she wanted guests to feel as if they were entering her home,” says Bill Flaherty, CEO of Rosewood Property Co. “Mrs. Hunt provided guiding principles that we follow to this day with each of our real estate assets.” 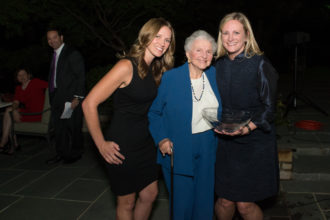 Dean Fearing, who was a sous chef at The Mansion at Turtle Creek in 1981 when it served only fine French cuisine, says it was Caroline Rose Hunt who helped inspire more regional Southwestern fare, including what would become a signature menu item.

“Mrs. Hunt came into the kitchen one afternoon and gave the chef and I this little piece of paper that was scribbled all over,” Fearing says. “She said, ‘I think we need to do a regional soup now that we are an international hotel, and we need to have something on the menu that represents Texas.’… The chef handed me the note and said, ‘I can’t believe she’s going to make us do a peasant soup.’ I took that little tattered piece of paper as a guide and formulated our own recipe, which became the famous Mansion tortilla soup. It was so crazy because it was a year later that I got the great idea that we should do some more regional food. But at that time, it didn’t even register.”

Hunt also influenced Dallas’ retail scene. She purchased the rights to the Stanley Korshak name and opened a luxury store in the courtyard of the shops at the Crescent Hotel in 1986. A year later, she hired Crawford Brock to manage the store, and they worked closely together for the next three decades.

“I remember when I was first hired away from Neiman Marcus, I was 33 years old,” Brock recalls. “She invited me to be her date to a function at Trammell Crow’s house. As a young guy, as you can imagine, I was incredibly intimidated. That night she took me under her wing, introduced me to all of her friends, and made me feel so comfortable at the party. That began my working relationship with her, and for the next 15 years we met every month. She never missed a month.”

At the height of her wealth in the 1980s, Caroline Rose Hunt was considered America’s wealthiest woman with a total net worth of about $1 billion—or about $2 billion in today’s dollars—according to the Dallas Morning News.

Oil and gas icon T. Boone Pickens knew Hunt for the better part of five decades. “She was one of the most dynamic business women of the 20th century, who will have a lasting impact on Dallas because of her philanthropy and business acumen,” he says.

Dallas’ original Uptown girl, Caroline Rose Hunt purchased 13 acres of land in the early 1980s for what would become The Mansion on Turtle Creek. Her original vision for the area is what makes Uptown the place it is today, says Noelle LeVeaux, president of Uptown Dallas Inc.

“Without Mrs. Hunt’s support, approval, and innovative spirit, Uptown Dallas Inc. and the Uptown Public Improvement District would not exist today,” she says. “As we celebrate our 25th anniversary this year, we recognize her incredible sacrifice to ensure the Uptown area would grow and develop into the unsurpassed walkable, viable, and profitable neighborhood it is today. Uptown will miss her pioneering spirit, energy, and commitment to our district.” 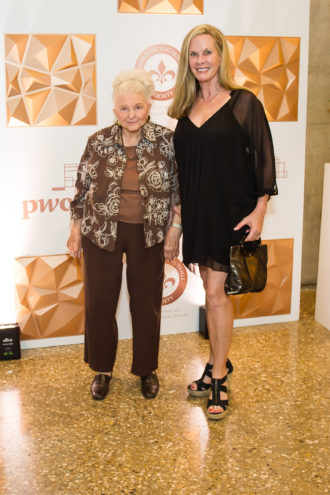 Caroline Rose Hunt and Gayle Sands at a recent United Way event on Sept. 28 (Courtesy of the United Way of Metropolitan Dallas)

Active in charity events until the day before her stroke, Caroline Rose Hunt and her family made the largest single donation to United Way of Metropolitan Dallas in 2015.

“We share in the grief and also in the celebration of a big life and an extraordinary leader,” says Jennifer Sampson, CEO of United Way of Metropolitan Dallas.  “We are grateful for Caroline’s life and remember her in many ways as we journey forward. Most importantly, we strive to live up to her standard.”

Hunt, too, was a fierce advocate for the Dallas Arboretum, among her many philanthropic endeavors.

“As one of the first improvements made at the Arboretum after we received the city contract to manage the garden, she and her sister and brothers gave the Paseo de Flores (the Walkway of Flowers) to connect the two properties, Camp and DeGolyer. They gave this in the name of their mother, Lyda Bunker Hunt.” says Missy Whisler, senior vice president at The Dallas Arboretum. “Their family home, Mount Vernon, was directly across the lake from the Botanic Garden. Her support for the Arboretum continued for decades. … She will be sorely missed.”

Caroline Rose Hunt was an avid antique collector and world traveler, favoring the English countryside. But there was one destination that topped them all: “I’m thankful for the wonderful opportunities I’ve had to travel,” she told D CEO in 2017, “but my favorite place is home sweet home—Dallas.”