In the trailer for Hulu’s newly released The United States vs. Billie Holiday—a Lee Daniels-directed biopic about the government’s effort to silence the legendary singer—Blake DeLong is the guy who says, “get her off that stage.”

DeLong plays one of the federal narcotics agents who targeted Holiday, a heroin user, under the guise of drug enforcement to prevent her from performing the anti-lynching ballad “Strange Fruit.” The Lake Highlands High and University of Texas at Austin graduate has cobbled together a quietly distinguished career in his 40 years, racking up some 39 TV and movie appearances plus several theatrical, voice, and commercial projects. But over the past decade or so, his oft-brief, always bone-chilling portrayals of what he has called “unrepentant racists” has emerged a theme.

From his home in Brooklyn, which he shares with his wife, Paula, and dog, Hugo “Spooky” DeLong, he talks about flawed men, Tilda Swinton, and his upcoming film about the time a controversial play came to Kilgore, Texas. It has been edited for length and clarity.

How did this role as Agent Carter in Billie Holiday come about?

It was summer 2019 and I stayed home from our annual vacation to Spain, where Paula’s parents live, because I was playing this World War II soldier. I’m home alone, researching—you know, watching WWII documentaries, smoking weed—and then I got this audition for this film about Billie Holiday, and they sent me the script.

I loved her music, like everyone, but this is one of those stories—like when I read the script for Ava DuVernay’s When They See Us—that I knew about the story but not the whole story, and I thought, this should be taught to every kid in America.

When I first moved to New York City I worked as a reader for casting directors, including Lee when they were casting The Paperboy, so this audition was my second time to meet him. A few weeks after the audition I get this call. I’m at the underground Trader Joes in Brooklyn with no signal. When I finally get upstairs my agent tells me that Lee Daniels wants me at his place in an hour to do a chemistry read.

I’m in cut offs, tank top. I sprint to the subway. I’m a drowned rat when I get to Midtown, sitting on Lee Daniels’ nice furniture, so embarrassed, and Andra Day (who won a Golden Globe for her portrayal of Holiday) is there for the reading. It was a good vibe. They were cool despite the circumstances, and I had a feeling when I left there.

When you get a part in a big movie, I had heard, your agent, once they get you on the phone, says, “hold on.” That means they’re getting everyone else in the office on the phone. And that happened. And I was at home, my wife was there, so we hugged and celebrated.

Though it is a small role, and my character doesn’t say much, I’m around a lot, I did a bunch of research, I had an informative conversation with a historian at American University who’s an expert in the early days of the Federal Bureau of Narcotics. Then I went to Montreal to shoot for 10 weeks.

You don’t have many lines in the movie, but your face says so much.

Yeah, a lot of looks. And working with Lee was terrific because it can be hard when your character doesn’t say a lot, but you really want to make your part count. Well, Lee was very gentle and generous with me. He said, you have to trust me when I tell you that the camera sees your face, your clothes and everything—the story is clear.

Whenever we were working every day, he would show us the monitor and be like, watch this, watch what you’re doing. That was cool, I had never worked that way before.

So, you play the racist agent. You play a racist detective in When They See Us, a racist cop in Spike Lee’s Pass Over—do you look for these sorts of roles, do they find you and how does it feel getting into these characters?

Not a day goes by, first of all, that I don’t say out loud how grateful I am to be a working actor, but I am not a big celebrity, so to some extent I am not out there turning down roles. But we all have our part to play, so to speak. And I would not necessarily be as thrilled to play these unrepentant racist roles if I didn’t feel like they were in service of the greater good and contributing to the spiritual and social evolution of our society.

If I had an opportunity to play, let’s say, a civil rights attorney or something, that would be amazing, but if a director wants you as a difficult or even evil character because they think you can do it and honor that character, fuck yeah, I want to do it. I see that as my job. Plus, every experience prepares you for future experiences and that works in mysterious ways. I have the sense that it’s quite possible that at some point, I may be asked to play a character that is morally complicated, trying to be better. 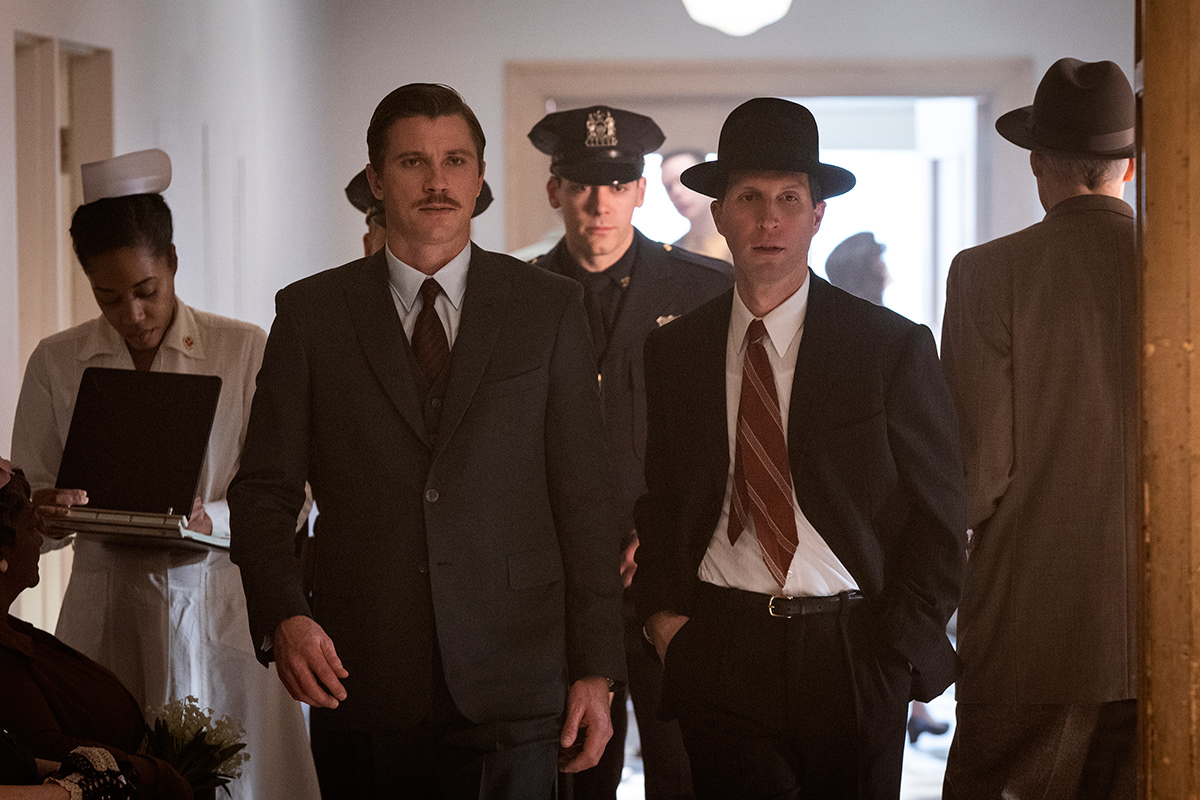 Ha, you know, I also think it’s interesting spending time thinking about why these characters are the way they are because, well, what is a good person? We all do shitty things and so figuring out how a person adopted this ideology that I do not agree with is a fascinating thing to me. I think about all these people who stormed the Capitol, or all the people who have been seduced by QAnon, and part of me, I don’t want to consider the complexities and nuances of that, but being a human being means sometimes being preyed upon by people not being honest with us. There are traps along the path of life and being in the wrong place, wrong time, listening to the wrong person, can get you to a bad place.

Next up, you are working on the true story, Angels in East Texas, about the time Kilgore College put on an internationally acclaimed play about two gay men and the AIDS crisis, and the town lost its mind, right? How’s that coming along?

It’s been picked up by Santa Rita Film Company. This is a huge passion project for me. I’m producing, and I’ve been working with my friend Justin Adams. We attached a brilliant director John Krokidas (Kill Your Darlings).

Justin and I met in New York after a play about 12 years ago, found out that we were both from Dallas, and we got talking. He went to RADA (London’s Royal Academy of Dramatic Art), which is on the level of Julliard, but before that he went to Kilgore College, home of Rangerettes and the Texas Shakespeare festival. The theater department there in ‘99 decides to produce Angels in America. The play was so controversial that protestors, buses full, came to town from as far away as Little Rock. There were bomb threats, death threats, and it was on the news in Dallas, I remember, and really across the country.

And I told him, we have to do something with this. And he says he’s been working on a screenplay, but it’s this big unwieldy story. He kept writing and I started reading, and we started chipping away. We wound up doing a reading in New York, and, hearing it out loud, we knew we were onto something special.

If not for the pandemic, I don’t think things would be moving along so fast, but we are hoping to start filming this thing in the fall.

Are you in it?

I will have a role, and I am super stoked about it, but haven’t made the casting announcements yet.

You have worked with a lot of big names. Could you name five to 10 who have most impressed you?

Not without a bucket load of regret.

Fair, how about a good anecdote?

Sure. I’ll tell you about the first big feature film I was in, We Need to Talk About Kevin. They took me to a trailer for hair and makeup and I walked in the door and there was Tilda Swinton, sitting in the trailer, and she turned and looked at me, and I am not even kidding, she said (mimics Swinton’s Scottish brogue), “Oh you are Blake! I have seen your audition tape. You are a terrific actor. We are so lucky to have an actor as good as you on this film! I am sorry you don’t have a bigger part.” I was flabbergasted. We were on set together all day and she stayed like that. Afterwards I was like, man, that’s how I want to be. If Tilda Swinton, a rock star, can be so cool and kind, there is no excuse to not be.

I have seen that same vibe from some Ava DuVernay, Daniel Craig, Emma Thompson, Spike Lee … of course Lee Daniels and, there’s a lot of good people in this industry.

You have a brother in Dallas. Where are your must-hit haunts here when you visit?

If someone doesn’t know Blake DeLong and looks you up, what clips or projects would you most hope they come across?

It’s hard to answer. (Note: DeLong never mentions the Best Buy commercial he starred in alongside Justin Bieber and Ozzy Osborne, which exists). I am so passionate about Pass Over, When They See Us, Billie Holiday—those kind-of social justice projects I am so proud of, but also Matt Muir’s Thank You A Lot, because I think it was a beautiful movie about Jack Hand who is going to be someone who holds up in music history. He was a genius songwriter and performer and that movie is a time capsule of his spirit.

Finally, there is this short that’s about eight minutes, which you can watch on Amazon. It’s one of the most successful short films ever—been in some 135 festivals—called Shy Guys, about two pee-shy guys standing side-by-side at the urinals in a public restroom.

Actually, there’s an instance where I play a pretty good guy.