For a couple weeks this fall, David Jeremiah set up camp in a vacant space behind 500X Gallery on Fabrication Street. The artist rented the room to display his latest work, a minimalist series of large plywood figures loosely modeled after the geometric lines of Lamborghini hoods.

Mounted across three of the warehouse’s four white walls, the monochrome black paintings stand tall like shadowy deities, circling the viewer and placing them at the center of the stage. Each is a different hood shape, replicated in three sizes and stacked atop one another, forming a single, disjointed body.

Those who are familiar with Jeremiah’s practice may be a little surprised with the simplicity of his new work. The artist is known for starting candid conversations about racial injustice in Dallas. In his most recent show at the Public Trust, he used stark colors—reds, yellows, oranges, and more—as globs that glistened from his canvas, whether that be rope fastened into a noose or pieces of wood.

Last year, he locked himself in a makeshift prison cell for three weeks and asked visitors to don a KKK hood before filling in the outline of a Klan mask that he tattooed on his own body for “The Lookout.” More recently, he presented “Offerings,” a series of altars representing the police officers killed by Micah Xavier on July 7, 2016, as well as an altar for the shooter himself. Viewers were asked to donate cash, eventually providing an answer to the artist’s question, whose grief is worth more?

The new pieces share the minimal aesthetic of “Offerings,” but they leave more room for interpretation. He’s still challenging the world around him, but he’s doing it more gently than he has in the past.

Jeremiah calls them “Hood N—s Camping,” a play on words that expresses both the inspiration and intention of the series. The name gives a nod to the artist’s upbringing in Oak Cliff, and the Lamborghini hoods the paintings were modeled after. The notion of “camping” starts with the work traveling from gallery to gallery, but it’s more focused on “camp” as the fusion of high and pop culture.

“Camp is when high-brow meets low-brow, but when you say meet, it sounds like it’s coincidental–that’s definitely not what it is,” he says. “It’s when the high-brow hand-picks what it deems worthy enough to bring up from the lowbrow, breeds with it, and creates something new that it leverages in a way that the highbrow still benefits the most from.”

It’s an idea all too familiar to an emerging artist trying to climb the ranks of the art world while staying true to himself. The path to success can be riddled with exploitation, especially for Black artists.

“Our culture is hot. We make everything cooler…we have training in how to do so because we’ve had to,” he says. With the momentum of the Black Lives Matter movement, there’s been a recent surge in demand for Black artists. “The campfire is being rekindled and it’s hotter than ever now, and everybody wants to be a part of it.”

Jeremiah wants to take advantage of this without letting the world take advantage of him. By creating art that acknowledges and questions the hierarchy it exists in, he attempts to turn the system on its head.

“Now’s the time. My thing is, how do I verify myself? How do I affirm myself?” he says. “Instead of me just stepping into that invitation, let me hold onto my power and let me define myself in this interaction and exchange.” 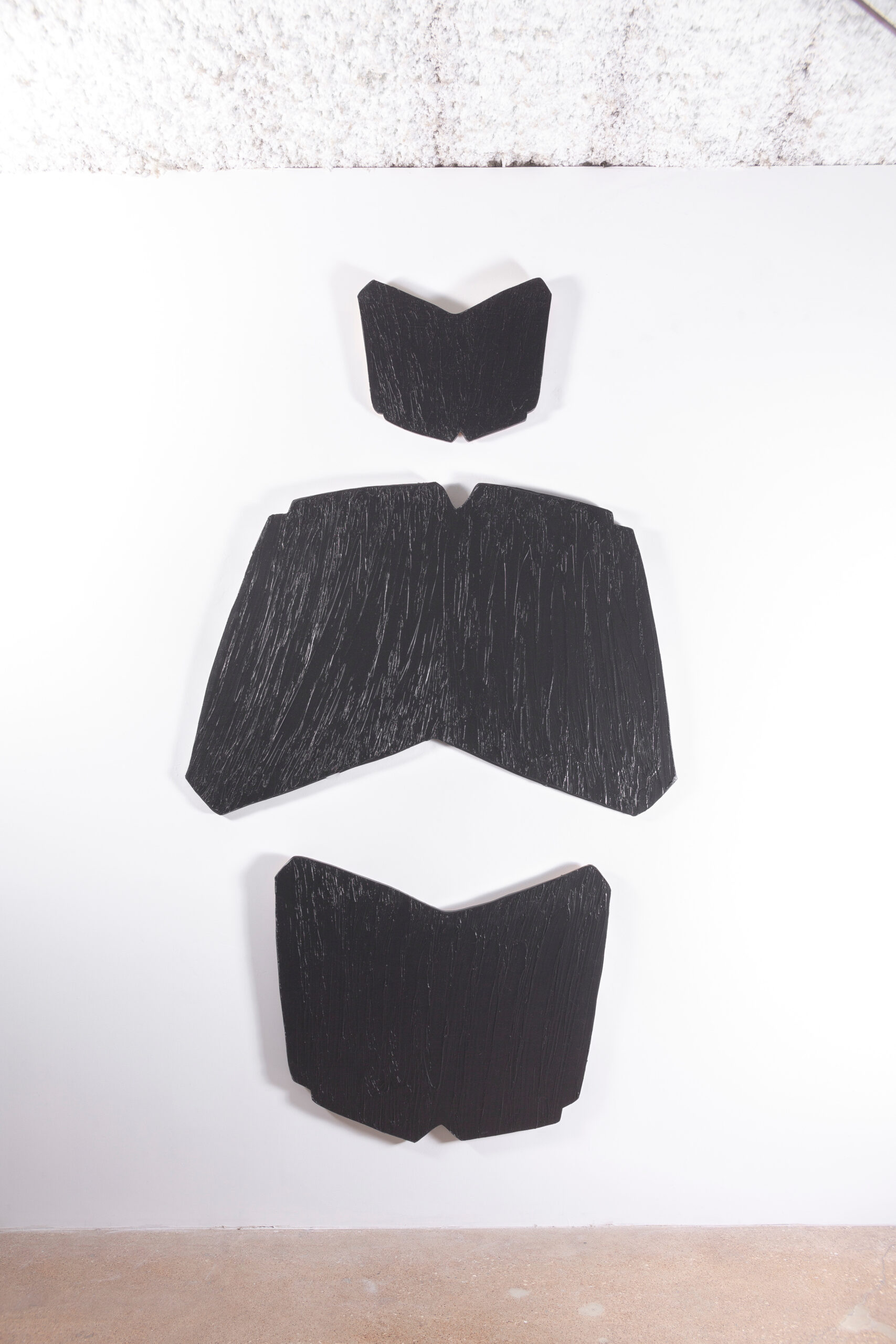 The installation at 500X was not a public exhibition, but an attempt to generate buzz around the work. Since no local gallery invited him to show, he rented a space himself, invited museum curators and art professionals to visit, had professional photos taken, and looked at the pieces as they’re meant to be seen for the first time. The work was created and presented in his own terms.

The works are installed across three walls to mimic a campfire circle, wherein viewers are the flames. The more attention given, the hotter the artwork becomes.

“This first time was just like a preview. A few museum curators came by and checked them out. It’s on people’s minds, right, so they’re just that warm right now. Let’s say if next time I get them shown, they’re in a high profile gallery or they end up in like a museum or something like that. They’re gonna be way hotter then than they are now. Are they hot enough to be legitimately considered camp, are they lit?” asks Jeremiah.

At the time of writing, the monumental paintings have already been put back into storage and have no upcoming engagements, though Jeremiah will show a similar series in a solo exhibition at a gallery in Washington, D.C. next spring.

It’s not uncommon for Dallas artists to find success in other cities before their hometown–take Jammie Holmes, for example. He was relatively unknown in the local scene until signing with Detroit’s Library Street Collective in April and breaking out in the art world. The DMA just acquired one of his pieces; it seems even the high-brow looks to the high-brow to know what’s hot.

“It takes somebody to give a fuck about art for art to be given a fuck about,” Jeremiah says. “It’s all a conscious choice.”

With the Camping series, David Jeremiah made that choice for himself. Perhaps now that the fire has been lit, another campsite will open up.