Public art festival Aurora Dallas is returning in 2020 after all, albeit in an entirely new format. The artist-run organization’s signature biennial event is indefinitely postponed. Instead, there will be an immersive, drive-thru art exhibition that makes sense for the times, both safety- and finance-wise.

The show, Area 3, will take over a 100,000-square-foot parking garage in downtown Dallas from October 1 through January 1. Visitors will view the exhibition entirely from their car, rolling through at five miles per hour. While past iterations of Aurora were free to the public, tickets to Area 3 cost $30 per car. They’re experimenting with a shared profit model to provide some relief to participating local artists, vendors, and the event managers, all of whom have struggled to find work during the pandemic.

“We started asking ourselves, who else was being heavily impacted in our community from this pandemic that we could reach out to, which is one of the first reasons we started the artists grant,” says Aurora co-founder Joshua King. “In those conversations, the parking lot vendors were brought up. We used to all pay $20 and park. Just imagine how much all these big venues are losing from that.”

That’s when King and fellow co-founder Shane Pennington realized that empty parking lots are essentially blank canvases. The team learned the owner of DalPark at 1600 Commerce, John Tatum, was a longtime supporter of the arts. 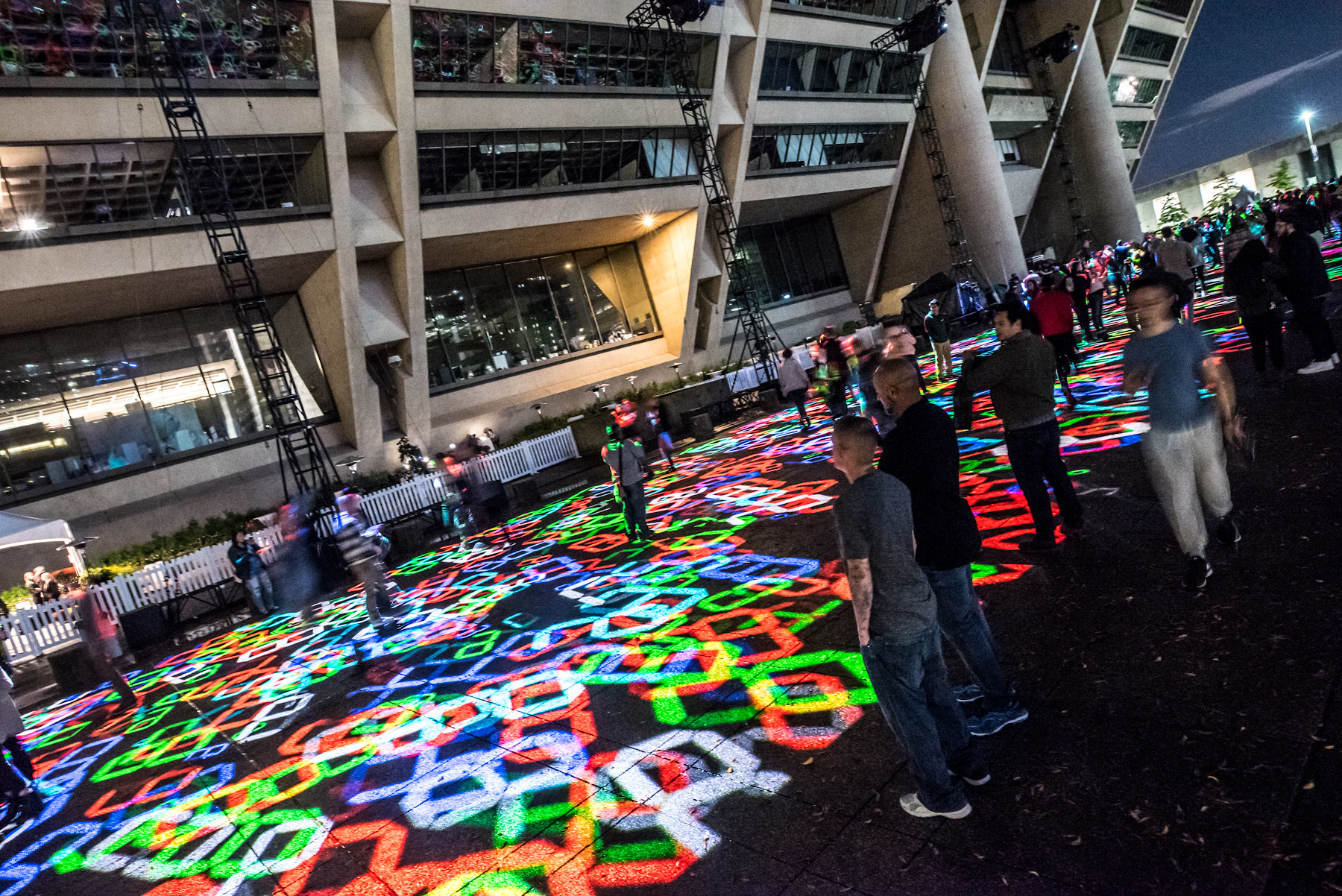 With Area 3, Aurora aims to bring the immersive nature of its events into the era of social distancing.
Bret Redman

The garage, across from Neiman Marcus’ flagship, also has an intriguing design. If you’ve driven up the steep spiral entrance ramp, you know.

“We all came to an agreement. We reached out to all of our artists, as well, and said, guys, we’re real interested in doing this project, but we did not get funded like we did in years past by individual foundations and corporate sponsorships, so we’ve got to change the revenue model of how we provide programming,” says King.

King calls them legacy artists of Aurora, “ones that we’ve worked with in the past and really trust to pull off an amazing impact under really hard times, and under some really difficult situations.”

The biggest challenge facing the artists was creating installations that resonate with an audience inside of a moving car. Viewers can’t stop and take a closer look at the artwork like they would in a museum or gallery. So, the artists are using every angle of the 360-degree canvas to display their work, pouring art on the walls, ceiling, and floor.

“It kind of takes us back to the days when Aurora first started 10 years ago,” says Tramaine Townsend, who describes his piece in the show as simple and timeless but grandiose in scale. “We just had a space to work with, and we brought what we had and just made it work. It’s kind of nostalgic to do it this way again this year–although, unfortunately, in, very weird circumstances. We’re just artists, we’re creatives, we’re gonna figure out a way for us to show people our work and be safe at the same time.”

The drive-thru format surrounds the audience with art without being surrounded by other people, an experience that’s been difficult to find in Dallas over the past seven months.

“When we used to say immersive, we didn’t have a negative connotation to being around a lot of people,” says King. “We were able to do an immersive exhibition again where you can literally drive through the artwork and where you can experience it on all sides of you.”