The Dallas Museum of Art will reopen to the public after five quiet months on Friday, August 14 with limited capacity, timed entry, and fewer hours. Employees began returning this week. The news comes days after Dallas Contemporary announced that it would stay closed for the remainder of 2020, setting its planned post-COVID opening date for next January. The DMA isn’t the first to welcome back visitors, though; the Meadows Museum, the Modern, the Kimbell, and Amon Carter each reopened in July.

Meanwhile, other museums in the Dallas Arts District, like the Nasher Sculpture Center and the Crow Museum of Asian Art, have remained in limbo as the coronavirus pandemic keeps North Texas in its grasp. The divergent paths taken by our cultural institutions raises the question: is it even safe to visit a museum right now?

“It’s always a caveated answer. I think they can be on the safer side. I think a lot of it depends on their physical layout, their structure, the capacity of visitation that they allow, their air circulation, and of course, everybody wearing a mask–all employees,” says Dr. Mark Casanova, president of Dallas County Medical Society. “Then, that’s an endeavor that could be made safer. That’s how I would put it.”

The Dallas Museum of Art’s reopening plan attempts to address many of these concerns. The museum will only be open Friday through Sunday from 11 a.m. to 5 p.m. and will allow up to 600 visitors per day, 200 people at a time in 2-hour time frames. General admission will remain free,  but time-stamped tickets will be required. At the end of the two hours, museum visitors will be escorted out of the building to make room for the next group. All groups will funnel in and out through the north entrance, across from Klyde Warren Park. The DMA’s gift shop will only allow six customers at a time and the cafe will only sell pre-made, grab-and-go fare.

Staffers and patrons are required to wear masks. Hand sanitizer stations and plexiglass barriers have been installed. Employees are asked to fill out a questionnaire each day and take their own temperature before reporting to work. Anyone who charts above 100.4 is asked to stay home.

While the DMA building is large and conducive to distancing, that doesn’t mean it’s risk-free.

“You could make an argument that while the physical structure and layout of an entity may make it a little bit safer than another locale or venue, or activity, but it’s the very nature of the human engagement in that setting is different, is closer contact, a longer dwell time, and that may strip away some of that safety,” says Casanova.

Dallas Contemporary, a significantly smaller venue than the DMA in the Design District, decided reopening this year would pose too great of a risk for both museum visitors and exhibiting artists.

“I’m a big believer in science, and when Dr. Fauci says that it’s going to get worse before it gets better, I believe a scientist who’s had skin in the game for over 40, 50 years. I didn’t see anything improving in Dallas, or in Texas, and all around me I saw it getting worse–no masks, no social distancing, people at bars,” says museum director Peter Doroshenko. “It was brought to the attention of certain board members, and later our board, that it would be a shame if we opened new exhibits in September, which I wanted to do, and then literally be put in a position to close it a week or two later.” 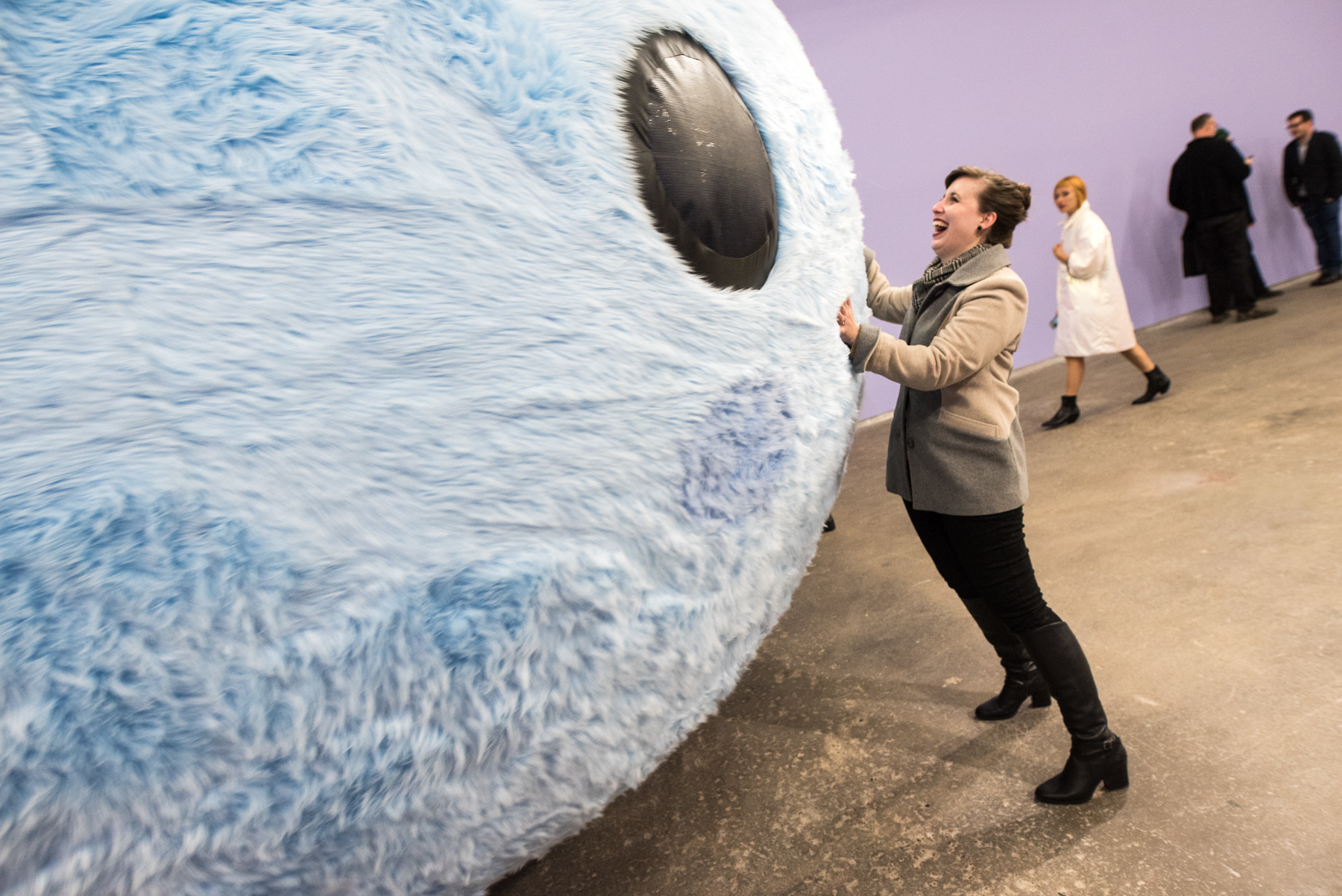 A patron touches the art at Dallas Contemporary in January. These kind of interactive exhibits will likely not be returning anytime soon.

Dallas Contemporary closed in March, shortly before it was set to open a trio of venue-specific exhibitions by Yoshitomo Nara, Liu Xiaodong, and Paolo Roversi. Now, those shows have been pushed to January.

“We have to give ourselves the correct amount of time, and we were told by doctors on our board that, basically, the right time would be the new year,” says Doroshenko.

The museum is the first in Dallas to officially pull the plug on 2020 exhibitions, but it will continue ramping up its digital content. It is offering exclusive online exhibitions through the end of the year. Most recently, the museum featured a collection of images documenting Dallas-based artist Jammie Holmes’ demonstration in reaction to the murder of George Floyd, Everything Hurts.

Doroshenko says that the museum has been focused on building its digital presence for more than a year, so the shift to online-only content has gone smoothly.

“We’ve been thinking about connecting with audiences electronically and how to further our learning programs and connecting and sharing with our audiences in such a deep manner that it’s already in our DNA,” he says.

Even as the Dallas Museum of Art and others turn their attention to reopening safely, the digital component will continue to be a significant piece of their programming. The DMA will have Flores Mexicanas: Women in Modern Mexican Art, My|gration, For a Dreamer of Houses, Sandra Cinto: Landscape of a Lifetime, and Frans Hals: Detecting a Decade on view when it opens on August 14. The first three of those are already available as virtual tours on the DMA’s website. And, for some art-lovers, especially those that fall into high-risk categories, that is still the best way to see them right now.

“I think individual museum-goers are just going to have to ask themselves the question of, do I personally feel comfortable going?” says Casanova. “Just because something is open doesn’t mean I’m forced to, doesn’t mean I have to. If I fall into a high risk category, maybe I shouldn’t go.”