Cherubs, stallions, roses, robotic cats, monster trucks, American bald eagles, a hand offering the middle finger, baroque figures with monumental breasts, a race car with a screw in its left-front tire. They tumble around and swirl overhead, riding the barrel vault ceiling of a Romanesque chapel built from plywood. A chapel sitting in the middle of a gallery inside the Dallas Museum of Art.

I first marveled at this psychedelic installation on March 12 at the press preview of the DMA’s new show For A Dreamer of Houses. The monumental sculpture-slash-mural, “Chapel,” vied with Alex da Corte’s neon house, “Rubber Pencil Devil,” for the exhibition’s limelight. 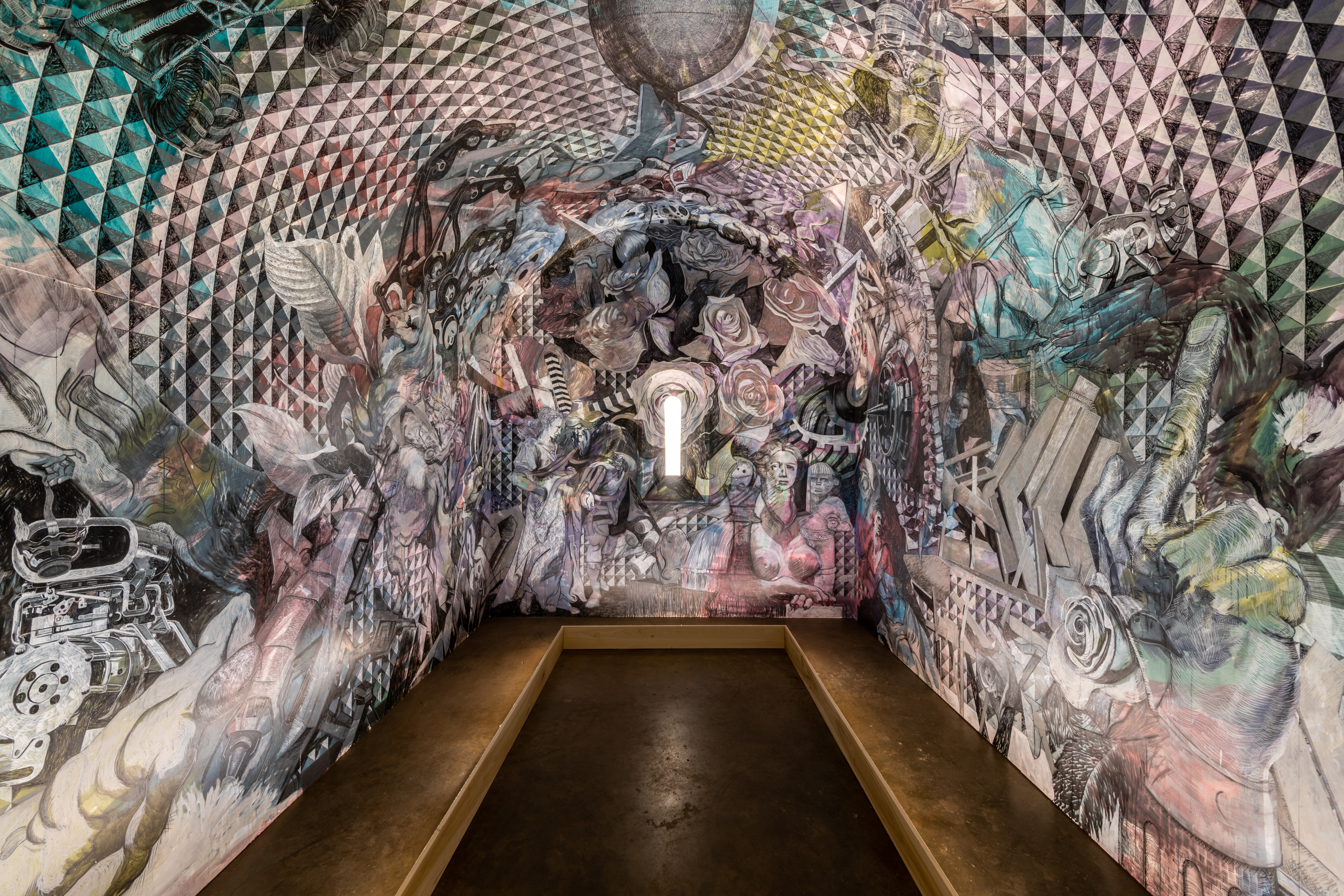 Nearby, the creator of “Chapel,” Francisco Moreno, described to a small group of media and various credentialed individuals how he spent two years building the structure and hand-drawing the interior. “I love drawing,” Moreno said. “I like to push drawing to its limits.”

For A Dreamer of Houses was set to open three days later. You could feel the excitement, the anticipation in the room. Coronavirus was still a blip on everybody’s radar. Indeed, in his opening remarks, Dr. Agustín Arteaga, the director of the DMA, mentioned that, in response to the spread of COVID-19, the museum would continue practicing deep cleaning and social distancing. It was business as usual. I drafted a review with the opening paragraph you just read and sent it to my editor.

The next day, the Dallas Museum of Art, along with the majority of other museums in the city, announced it would close its doors indefinitely.

A month later, the DMA–and all other cultural institutions, theaters, music venues, bars, shops, restaurants–are still closed. Nevertheless, Dallasites have persisted. The creatives have gotten creative. And, as of Monday, you can view For A Dreamer of Houses virtually.

You navigate the exhibit as if it were Google Maps: click on the floor to move around the gallery; tap orange dots to read the museum labels and green dots to hear DMA curators analyze a piece’s composition, or to watch the artists analyze their work. There’s even a video of Moreno describing the creative process behind “Chapel.” (It’s every bit as funny as he is in person.) 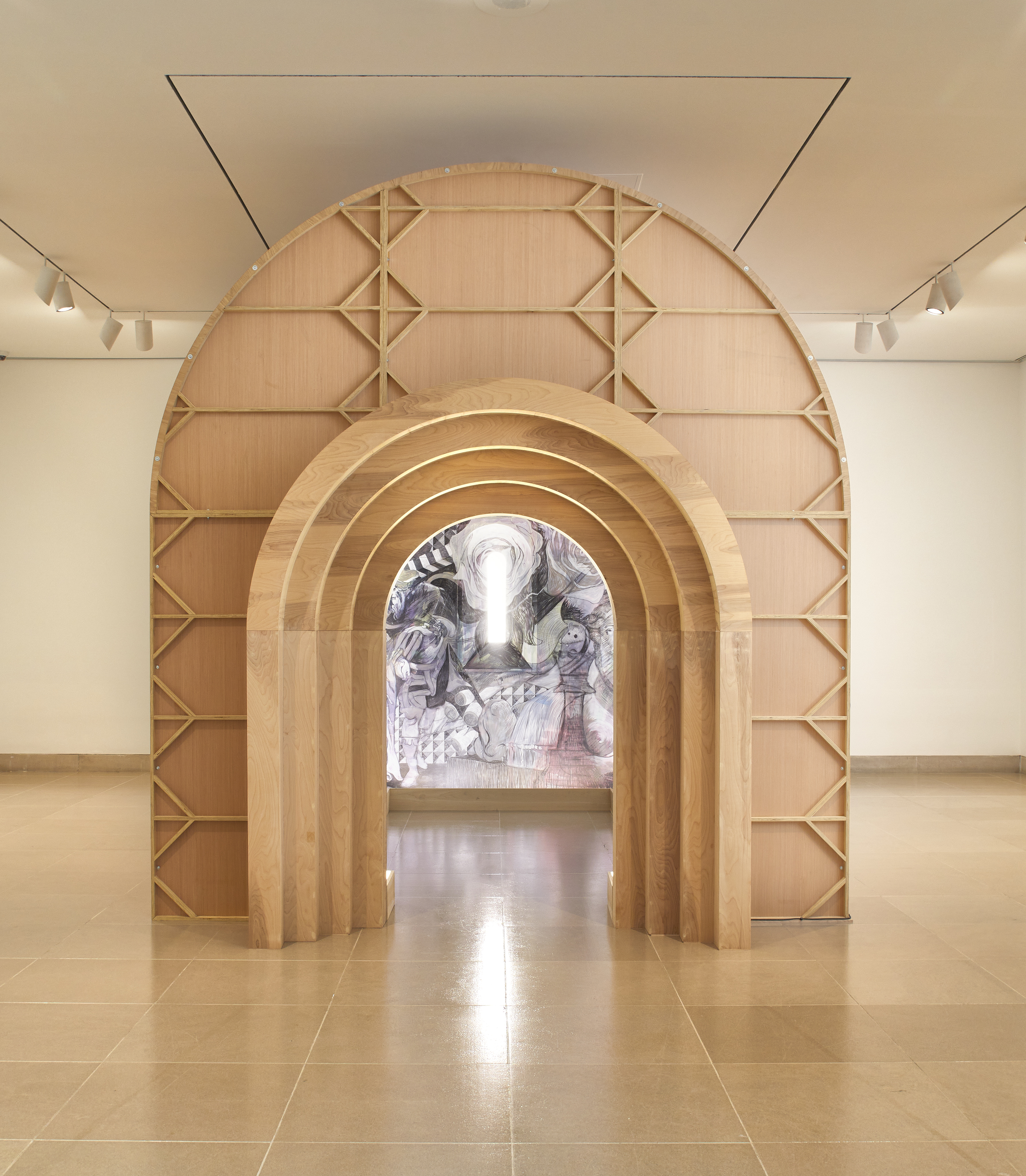 Because you can go watch the video yourself, I’ll share what Moreno offered at the press preview. He especially loves to draw figures of “cultural significance,” whether high culture (Rubenesque women) or low culture (robotic cats). To the artist, it illustrates that neither high culture nor low culture really exist, rather, only visual culture and cultural significance exist. So, the work of Dutch master Peter Paul Rubens and Doraemon (a manga and anime series about a robotic cat) are each as high or low culture as the viewer decides.

This ironic deconstruction of our presuppositions is a favorite theme of For A Dreamer of Houses, which, at its heart, looks at how we define and represent ourselves in our spaces. Inspired by philosopher Gaston Bachelard’s book The Poetics of Space, and organized around the book’s chapters, the exhibition includes works by legends like Janine Antoni, Doris Salcedo, Diane Arbus, and Sol LeWitt, as well as respected local artists.

Dallas-based Misty Keasler is one of them. Her photograph “Green Room (Quarenteen) Leagnul di Copii, Tigru Mures, Romania” images an orphanage quarantine room painted green by volunteers. Interiors manifest our values and are totally specific to our culture, Keasler claims. Capturing all the personal artifacts scattered about the room with childish messiness, the photograph corroborates: The toys, the balls, and stuffed bears suggest the youthful values of play and joy. The heavy light and empty room, conversely, convey the somber, bereaved culture of orphanages. (Hover your mouse on the green dot and you can listen to Dr. Anna Katherine Brodbeck, the senior curator of contemporary art, place the photograph in its curatorial context through the virtual exhibition.) 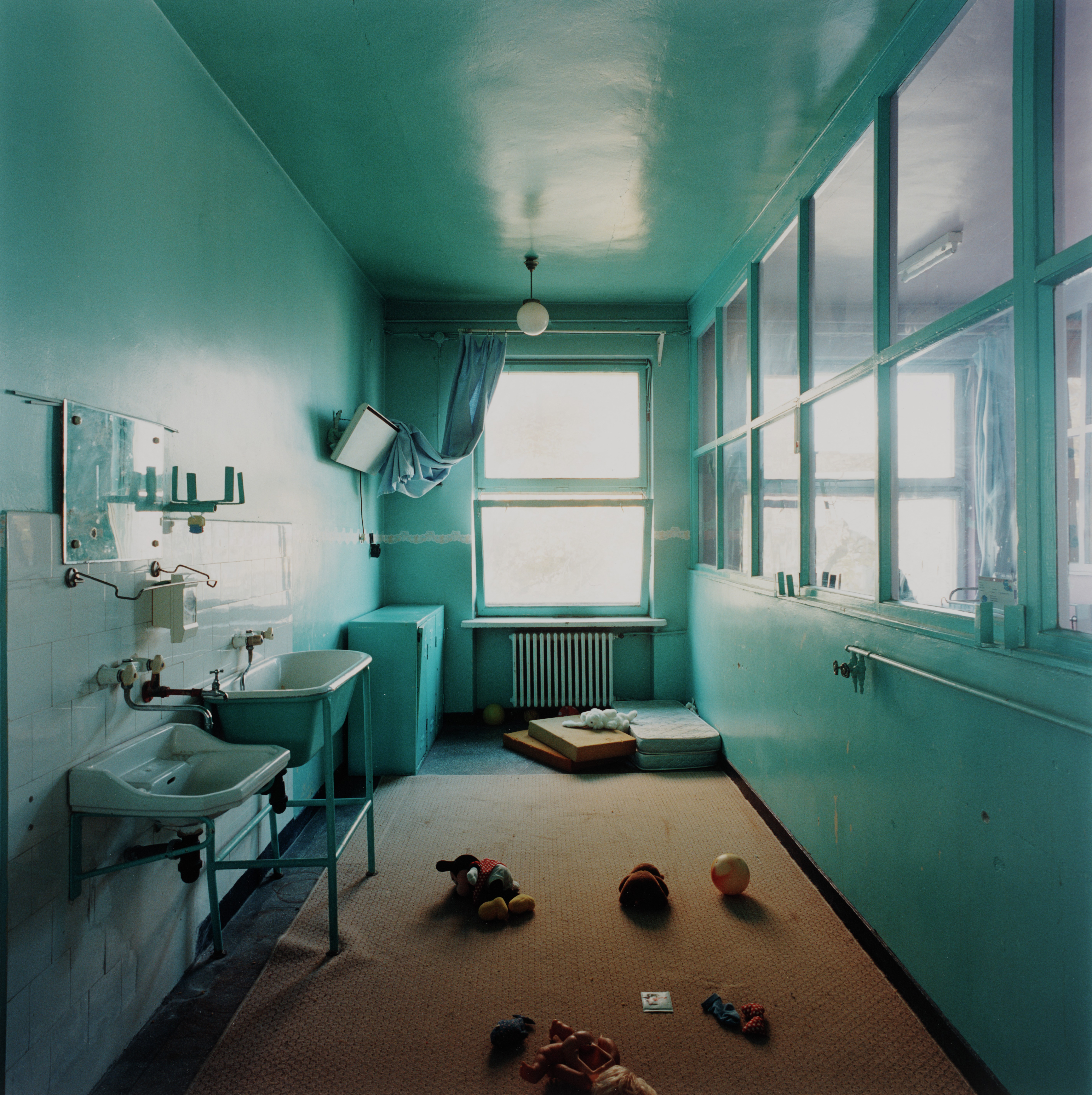 Hanging in a gallery titled “Shells,” Keasler’s “Green Room (Quarenteen) Leagnul di Copii, Tigru Mures, Romania” contrasts with other works in the gallery, for the most part photographs of the exteriors of dwellings. This juxtaposition implies that the quarantine room, intended to be a temporary habitation, quite often becomes a permanent prison cell—a dwelling shell. When orphans first arrive, they enter from the back and are supposed to pass through the quarantine room for maybe two or three weeks, Keasler explains, but some of the kids never leave. Not inside, not even outside the orphanage, the kids lead a shell-like existence in a purportedly liminal space. It begs the questions: Where do your dwelling spaces locate you? How do they identify you?

Another favorite theme of For A Dreamer of Houses is the numerous significances objects can assume and the myriad responses they can elicit. Vietnamese artist Danh Vo, in “Lot 20. Two Kennedy Administration Cabinet Room Chairs,” presents us with a chair which formerly lived in John Kennedy’s cabinet room.

Vo acquired the chair at an estate auction of the late Robert McNamara, the former U.S. secretary of defense who played a major role in escalating the Vietnam war. To an American like me, the chair immediately recalls Kennedy’s presidency and assassination. To a Vietnamese like Vo, the chair recalls the war which wracked his homeland.

Is the chair to be venerated or denigrated? That depends on the viewer. There’s no denying, however, that any object, and the space it fills, tells numerous–and often contradictory–narratives. The beauty, or the pain, of these spaces is in the eye of the beholder. For a Dreamer of Houses suggests that all our places, and our beliefs, might merit a second look.