“I hate the news. Why can’t you just print the facts?”

If you’re a journalist, you’ve likely heard this before. In the age of the internet, the world seems to have more media than it knows what to do with. Fact and fiction stand side by side in our feeds as we scroll and absorb. Who and what can we trust?

“Why can’t you just print the facts?”

As a journalist, I don’t know what to do with this question. Not because I don’t have an answer, but because I have too many. My explanation would exceed the word count of a normal conversation. That is, until someone provided me with a concise response.

“Well, which facts, in what order?”

When I heard Janielle Kastner sum it up like that, everything clicked.

“For instance, ‘suspect of traffic violation shot’ is something that the police department can say about a shooting victim,” explained Kastner. “But they could just as easily say ‘unarmed black man killed at hands of officer,’ and both of these are effectively true, but which facts do you include in what order?”

Kastner understands the intricacies of the media, but she’s not a journalist. She’s a playwright.

She and Brigham Mosley have spent the last two-and-a-half years shadowing reporters at the Dallas Morning News to write a play about journalism. Commissioned by Ignite/Arts Dallas, the pair spent hours in the newsroom with a lofty mission: Tell the story of storytellers.

It began with Tom Huang of the Dallas Morning News, and Southern Methodist University journalism professor Lauren Smart sitting in the backyard of The Wild Detectives. Part bar, part bookstore, part coffee shop, part small-scale venue, it’s the perfect breeding ground for a big idea. In this case, Smart and Huang had the idea to give artists an insiders’ look at the media world.

For more than two years, Mosley and Kastner listened, followed, and asked questions. What resulted was a five-act play illustrating their journey to understanding how a newsroom works. 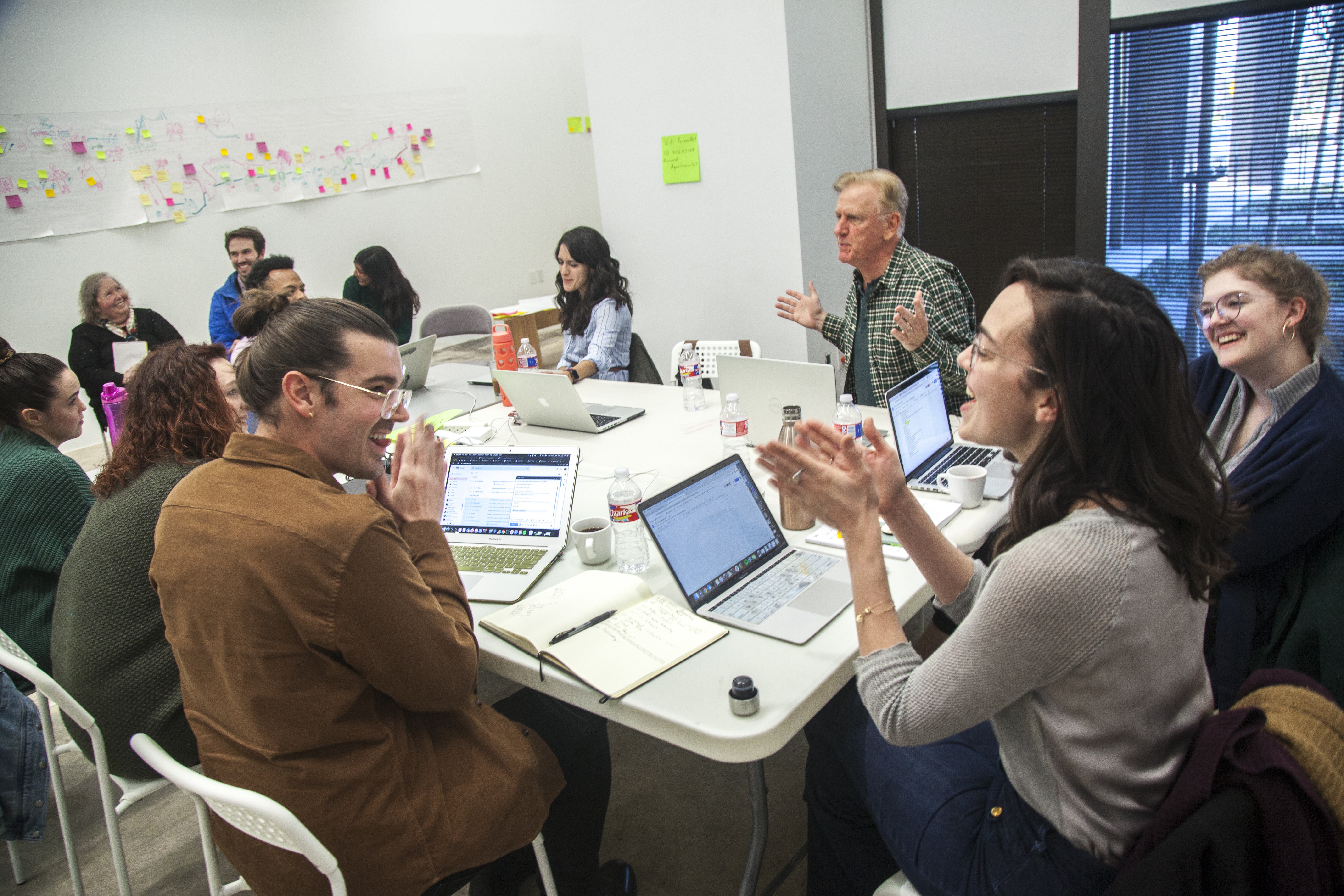 “What we learned isn’t actually as interesting as how we learned it,” explains Kastner. That’s why the duo decided to write themselves into the play as the main characters, entering the newsroom wide-eyed and cynical.

“I got all my news through Buzzfeed, and, like, ‘Weekend Update’ on Saturday Night Live,” says Mosley. He says he went from being “news illiterate” to better understanding things like what the Opinion section in a newspaper is and that it doesn’t represent the views of the whole paper. He realizes now that papers aren’t supposed to go to a protest and “pick a side” to report on.

But as you’ll see in the finished play, Mosley’s newfound “fundamental understanding of how to read a newspaper,” as he describes it, also came with overwhelming dread.

“I’m at capacity. I can’t bring any more suffering into my life. The world is on fire and I just want to be happy and I just want to check out,” says Mosley, describing the feelings he felt at the beginning of the process, which he bestowed upon his character. “We have that empathy to people who say they are so done with the news…but if you give up on the news, you remove yourself from society. And you’re going to be alone and vulnerable.”

“Or you’re not alone and vulnerable, but other people are,” adds Kastner.

As the playwrights waded through these issues, attempting to grasp local journalism and all its heroics and sins, things became murkier. The black-and-white truth blended into a million shades of gray.

They saw problems in journalism and how it functions today, specifically in the Dallas Morning News. They saw problems in representation, as well as sustainability in how it pertains to running a business (selling papers) that is also a mission (spreading information and protecting democracy).

“The criticisms of the news, Dallas Morning News specifically, aren’t necessarily wrong,” says Kastner. “Nor are the journalists that are trying very hard to adapt and get better.” 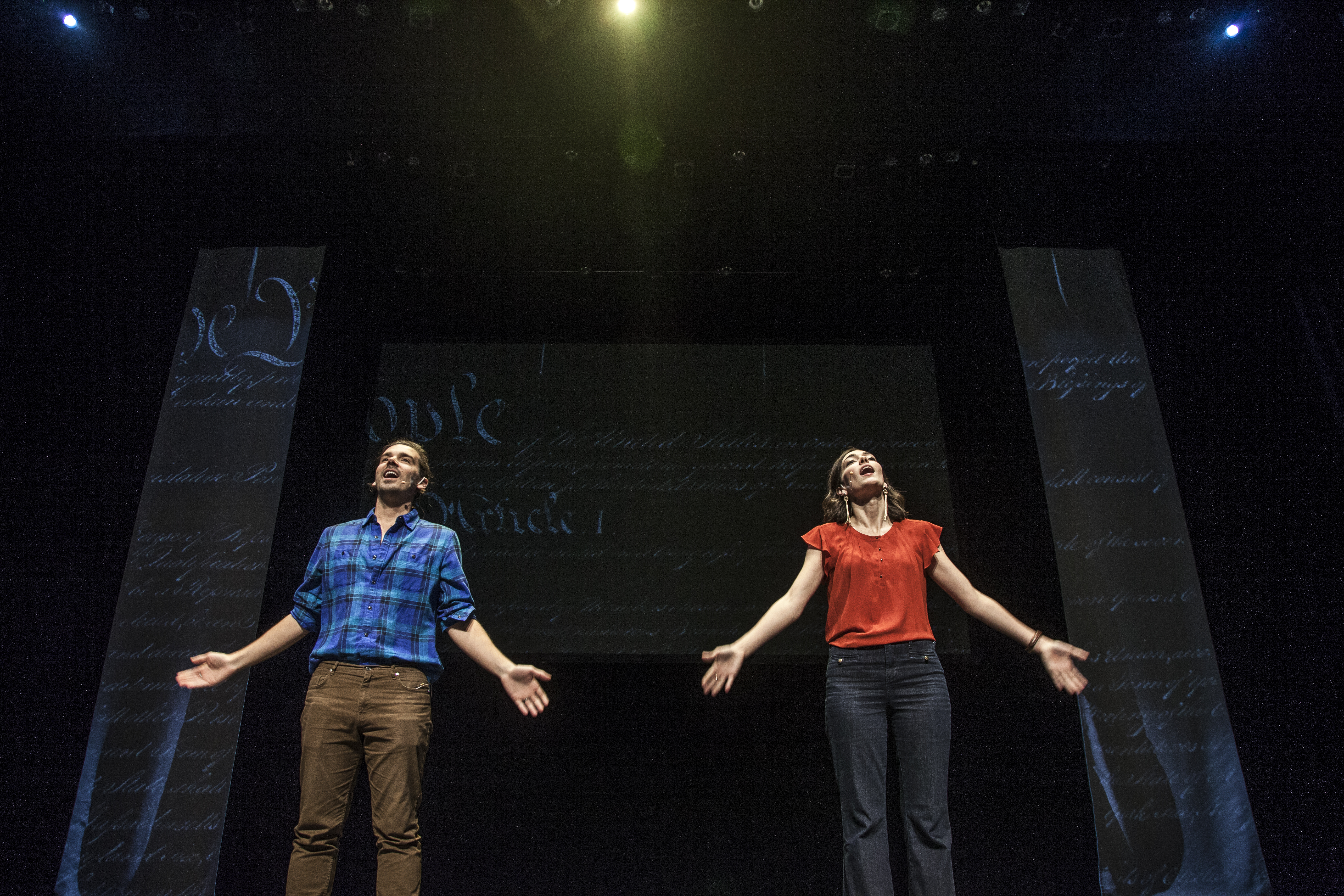 “Playwrights in the Newsroom.” Photo by James Edward for AT&T Performing Arts Center.

Kastner says her biggest realization through this whole process was seeing the humanity in institutions like the Dallas Morning News.

“This legacy institution is a local institution. It’s my institution. This is my newspaper,” says Kastner. “And if I don’t feel like they’re covering stories that matter to me, it’s my job to make sure they do, because they’re my paper–they’re my city’s paper.”

The national conversation about news “with the parenthetical ‘fake’ in front of it,” as Kastner says, is big, loud, and important. But she and Brigham are thrilled to turn people’s heads to see what’s around the corner.

“It feels much more human, too,” says Mosley. He was glad to depict a shift on stage from “journalism is a machine” to “do you trust me to tell you what happened?”

“We don’t have solutions,” says Kastner. “I would say our play nets out not in an optimistic, or a pessimistic way either, just in a very hopeful way.”

The playwrights and I sat talking in the cold backyard of the Ginger Man, across the street from Theater Three. They had just come from their first week of rehearsals with their full ensemble, blocking their precious play in the venue’s downstairs space called Theater Two.

They were still flushed and giddy as if charged from a day of rehearsal, most likely grateful to back in a theater and not a quiet and fluorescent-lit newsroom.

I was glad to see their understanding of the nuances of this career field I am diving into. They have seen a lot, and now they know the facts. But I’m curious to see what that will look like when “Playwrights in the Newsroom” hits AT&T Performing Arts Center on March 5. What story are they going to report? Which facts, in what order?