Over the past six decades, Robbie Robertson has been a musician, artist, author, raconteur, film composer, and businessman.

But many of Robertson’s most cherished memories, both for himself and his fans, stem from his days as the primary guitarist and songwriter in the legendary Americana group known simply as The Band.

That’s the focus of Once Were Brothers: Robbie Robertson and the Band, a new documentary that revisits and salutes the camaraderie of one of the seminal blues-rock music acts of the 1960s and 1970s.

The film uses extensive archival footage and interviews — Robertson was the only one of the two surviving band members to participate — to reminisce about The Band’s origins, influences, camaraderie, Robertson’s volatile relationship with drummer Levon Helm, drug and alcohol abuse, collaborations with Bob Dylan and Ronnie Hawkins, and the buildup to Martin Scorsese’s iconic 1978 concert film The Last Waltz.

“It was a celebration of the brotherhood, and this incredibly unique musical outfit. Nobody has a story like this,” Robertson said by phone from Los Angeles. “We celebrated it with The Last Waltz, and this is celebrating it in a whole other fashion, and in a much more emotional way.”

The documentary started when Robertson, now 76, was approached about a film based on his 2016 memoir Testimony. At the time, he was intrigued, but also working on multiple albums, artwork, and film projects. Robertson met with several directors before finding the right fit in Daniel Roher, who’s more than 50 years younger than him.

“I didn’t know if he was going to know anything about this period of time and this story. But his wish was to make a documentary based on this book. At least he was plugged in. I thought, let’s take a shot on this guy. He’s 24, but I was only 24 when I made [the breakthrough 1968 album] Music from Big Pink,” Robertson said. “As he got involved in it, and I could see how dedicated and energetic and curious he was, I became more confident and more excited about the project. The movie kept growing and growing. It turned into something special.”

The documentary inspired the Canada native to write a new song that became the title of the film. It was later championed by Scorsese and Ron Howard, and wound up getting the prestigious opening-night gala slot at last year’s Toronto International Film Festival.

A significant portion of the film focuses on The Last Waltz, which introduced Robertson to Scorsese for the first time. Robertson has since composed music for a handful of the Oscar-winning director’s projects, including the 2019 epic The Irishman.

Speaking of The Last Waltz, that bash held on Thanksgiving night in 1976 in San Francisco was meant to be the group’s farewell to touring — at least temporarily. Yet the other four members later continued without Robertson, due in part to his notorious estrangement with Helm, who died in 2012. Despite intentions to record with them again, Robertson never did.

“That was the wish, and we all thought that was going to happen. But everybody was off doing their own things, and then really couldn’t find their way back. You couldn’t blame anybody,” he said. “We had been together day and night for 16 years. For somebody to want to go a different direction, want to make other discoveries, want to grow in other ways — that’s really pretty natural and understandable. I don’t think anybody saw any fault in that.”

The group was inducted into the Rock & Roll Hall of Fame in 1994, when Robertson reunited with bandmates Rick Danko and Garth Hudson along with longtime friend Eric Clapton. However, Helm refused to come.

“It was disappointing for me when we were all supposed to get together and nobody showed up. There was a deep sadness in my heart,” Robertson said. “I just had to read the writing on the wall.”

Robertson has since focused on other solo projects, most recently including a second memoir and a new album called Sinematic, which features the deeply introspective “Once Were Brothers” among its tracks. He said his passion for music and lyricism hasn’t wavered in more than six decades.

“When I went from Canada down to the Mississippi Delta when I was 16 years old, I thought I was going to the holy land of rock and roll, and I had to figure out how to make some magic,” he said. “I’ve been on that journey ever since. I’m on the same mission that I was at 16 years old. I don’t know how to stop. That’s what makes me breathe.” 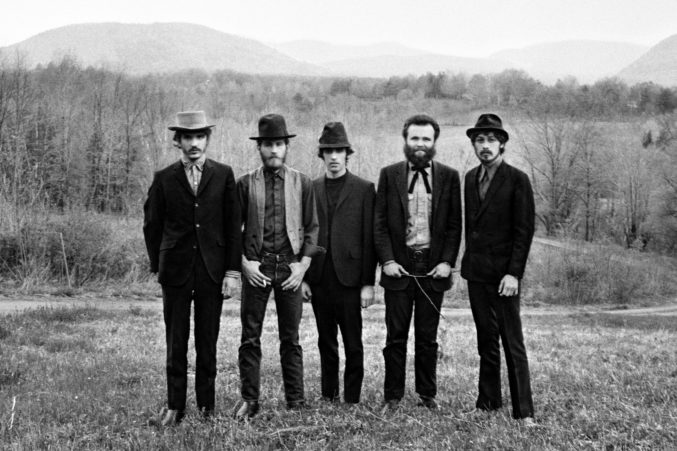 Fuzzy beards and quirky hats were as much a part of The Band as the music.
Magnolia Pictures