When artist David Jeremiah says that “black art is dead,” he doesn’t mean to imply that it no longer exists. He doesn’t say it to discredit other black artists who are making engaging and meaningful art. It’s also not meant to imply that black artists no longer need defined spaces; there’s no endorsement of the idea that art at-large has reached an aspirational state of racelessness.

Jeremiah, whose show “Things Done Changed” is on exhibit at the Public Trust through March 14, is concerned with how black art is presented and engaged with. He worries that its repossession by white buyers and the gentrifying effects of gallery culture risks declawing its messaging. To Jeremiah, black art should be as varied and multifaceted as the artists and the experiences they’re depicting in their work. Discomfort can be part of the experience, especially when the artist chooses to explore the iniquities that remain present in black life. In his own show, Jeremiah does not hold back.

“Things Done Changed” explores the artist’s present reality through many media: wood and concrete and bullet casings, among other more traditional materials like vibrant paint on canvas. It is easier to distill black suffering by anchoring it to the past. The hopeful eyes of slaves and the comforting hum of Negro spirituals can make the genocide, chattel breeding, rape, and the foundation of our founding fathers’ vision of America easier to ignore. Those harsh truths are actualized through generations of life-sentenced, uncompensated labor. The facts are harder to avoid when they’re depicted in the present.

That is where Jeremiah’s show exists. His art addresses what affects the black experience today and its implications for the future. He’d rather be a menace to the common conception of black art now than celebrated for its innovation once the wound has had time to heal.

“Things Done Changed” has as many messages as its mediums. In “The Story,” Jeremiah responds to a critique of his art as “primitive” – the definition meaning a piece of art work made by an unschooled individual, but colloquially akin to words like “barbaric” and “subhuman.” The “primitive” idea and motif has fed, followed, and justified both the savage and socially-accepted mistreatment of black people since our first colonial contact with white folk. Jeremiah challenges the school of thought that there are proper channels and avenues through which creators graduate from primitive to accredited.

What qualified as “distinguished” prior to establishing a system of Eurocentric artistic merit? Isn’t it true that every man-made system was once made up? It’s all primitive.

So Jeremiah leans into the connotation. Instead of taking offense at being called “primitive,” he inserts himself into a postmodernist framework that fetishized what was deemed primal. The individual pieces of “The Story” are warped, beaten, and manipulated fragments of wood. Crude, mask-like effigies employ a wide-spectrum of colors. But they’re always juxtaposed with jet black make-up, the likenesses of men and demons, while gold painted intentional shapes compose the Gods they created.

The artist says these pieces are what he would create were he able to travel back in time and capitalize on the movement and ideology. He delivers its message with a wink.

He likened the process of creating these pieces—punching, kicking, ripping, sledgehammering the wood into jagged hunks before incorporating paint and mixed materials, including bullet casings—to that of a monkey-man, or what would have been perceived as such, making use of rocks and other natural materials to carve out its crude interpretation of the world around him. It’s making fun of those who’d question “that a primitive motherfucker can make something aesthetically and conceptually innovative.” 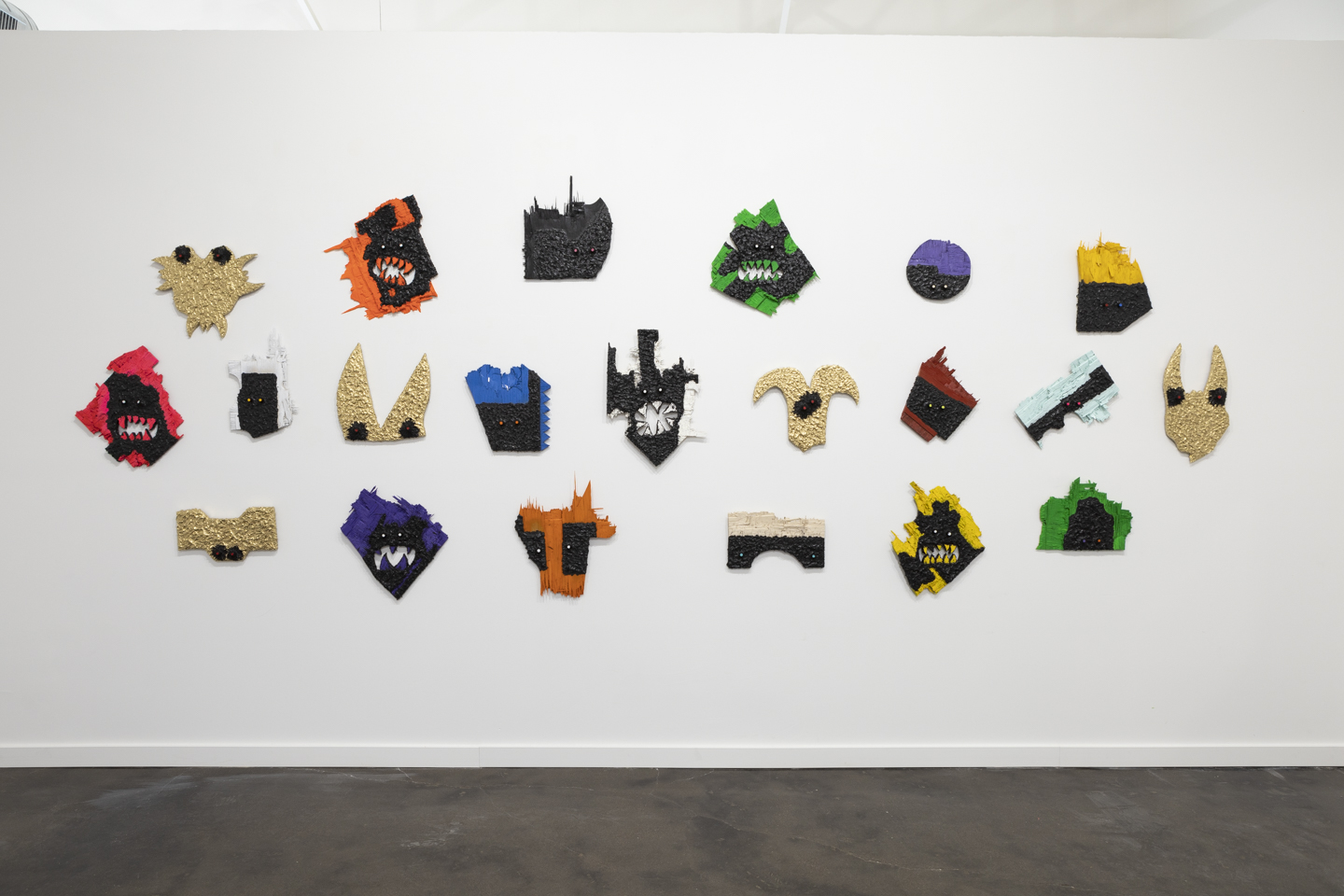 David Jeremiah’s “Things Done Changed” is on view at the Public Trust through March 14. This portion of the exhibit is titled “The Story.” (Photo courtesy the Public Trust)

Call it skepticism. Call it satire. Whatever it is, it’s free game for Jeremiah and he’s aware enough to be simultaneously enraged and tongue-in-cheek about the social inequities and racial inconsistencies that inspire his art. He has a history of confrontational artwork. His previous piece, “The Lookout,” involved him locking himself in a makeshift cell for three weeks. Attendees were allowed in one at a time, asked to put on a KKK mask, and to stick-and-poke tattoo white tattoo ink into a KKK mask he had previously tattooed on his ribcage. The goal was to push the viewer into an intimate conversation with the artist.

In another piece in his new exhibition, Jeremiah envisions a not-so-distant future in which Micah Xavier Johnson, the killer in the Dallas Police shootings of 2016, is canonized as a catalyst for radical reformation of local police and community relations. Instead of the villainy ascribed to him, Jeremiah imagines a number of cops within the ranks of DPD use Xavier’s retaliation to police brutality – taking the lives of five officers, injuring nine others and wounding two civilians – to spark a symbolic internal revolution. This takes the form of bumper stickers reading “I ♡ Micah” being placed on Dallas police squad cars.

Viewers can watch a series of guerrilla videos of Jeremiah placing these real-life bumper stickers on real-life police cars – a commitment to his artistic and ideological vision that could have landed him in jail.

Art as retaliation to social injustice is a hill that David Jeremiah is willing to die on. Darryl Ratcliff, the artist who curated “Things Done Changed,” describes it as “radical nonviolence,” and urges all to take in the themes present in Jeremiah’s work.

He refers back to occurrences throughout American history—and damn-near daily headlines—that normalize the portrayal of dead black bodies at the hands and arms of those sworn to serve and protect. This is his justification for the lack of consideration for white sensitivity in his art. If his work offends by revising the dominant narrative—repainting a cop killer as a martyr—he posits, then just maybe that feeling is similar to what the descendants of slaves, exploited in every moral and physical sense, must feel. Their continual oppression dates back to systems created by slaveholders and founding fathers to maintain a racial advantage.

Martin Luther King, Jr. and Muhammad Ali were once considered radicals, smeared and vilified as un-American and enemies of the state in their present time. In death, long after their lives and noble acts made impact and shook a substandard status quo, were they deified and made into icons to be honored and capitalized from.

Reducing MLK, Jr. to a single speech played on an infinite loop for less than one twelfth of the year, or Muhammad Ali to sport’s greatest showman while not being held accountable for the ruin their lives suffered behind the idea of white civility and a black man’s place in it, is simple erasure.

And in that regard David Jeremiah is more Nat Turner than MLK – uncomfortable and uncompromising, so undiluted that revisionists can’t misinterpret the story, its action, or its impact. You can’t G-rate Nat Turner. You can’t screen print him to an Urban Outfitters tee. You won’t find Jeremiah’s art there, either.

“I refuse to be a victim,” he repeats. “This is just art. Wood, paint, and bumper stickers. Better that than a rifle or a bomb.”

Things Done Changed, selected works by multimedia artist David Jeremiah, will be showing at the Public Trust until March 14.