Can Lights All Night just franchise out and run every other festival in town? It’s probably the newcomers’ only chance at survival. As Garrett Gravley pointed out recently in the Observer, there is a cemetery overrun with large-scale entertainment endeavors that never make it past the first year (see: KAABOO). Lights All Night just concluded its tenth anniversary celebration, and the EDM fest provides a template for other would-be organizers. There is a lesson somewhere in their philosophy about knowing your target and focusing on niche music communities. Lights All Night programs its venue from floor to ceiling with various activities, but it doesn’t pretend to be for all audiences. Counterintuitively, that is more of a cultural welcome mat than the generic and haphazard events that attempt to cater to multiple generations.

Even though Lights All Night tends to draw friendly and often out-of-town crowds, the ten-year mark provided an even gentler presentation than it did in 2018. There were no drug-sniffing dogs with “Active Canine Operations” signs posted up front, as I mentioned in last year’s wrap-up.

The year-end event is consistent, almost to a fault. Last year’s layout did not change much, and even the promotional draws, such as a giant, glittery disco shark, seem the same. A new commercial sight gag included a tobacco-sponsored money tank that spits dollar bills at participants as they attempt to collect the cash as it flurries about.

The outside stages were much better situated than last year as well, but nothing can be done about the December mud that is tracked around the perimeter, and heaven help you if you get stuck going the wrong way. That said, the lines were much more manageable this year. 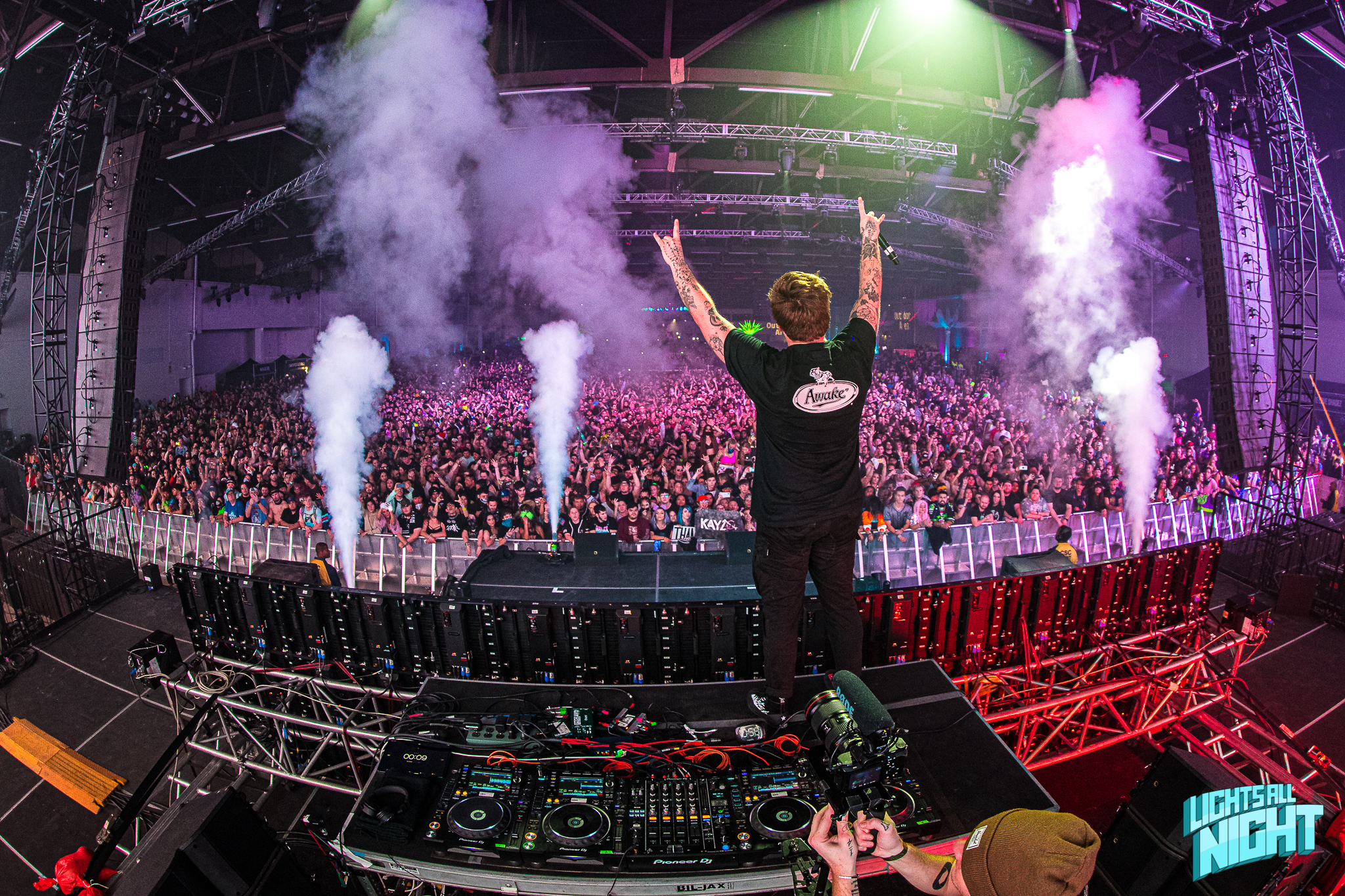 Lights All Night is now old enough to draw nostalgia not only for different iterations of the festival, but also for the once more broadly drawn umbrella that encapsulated contemporary electronic music. Gone are the days of Girl Talk or Ghostland Observatory or Neon Indian playing Kay Bailey Hutchison Convention Center in the earlier years. It’s hard to know how many acts from previous LAN lineups would still be appropriate, especially if any guitars are involved, with some exception. 2018’s set by Oliver Tree is perhaps the most glaring, whose bowl-cut look then went on to be one of the most ubiquitous acts of 2019. To have that kind of predictive influence for non-headliners only speaks to the successful gamble made by the event’s organizers, deep into the lineup.

The cotton candy apocalypse look is still in as EDM is now settling into its classic rock phase. Random friends and people who generally don’t attend dance music events are aghast when I tell them that I will spend another weekend here. “Do they still suck on pacifiers?” is a typical question asked of the attendees. I saw exactly one pacifier out of the approximately 35,000 people in attendance. There were many hula hoops, including a woman being led around by a friend as if it were a leash.

While the guitar is perhaps the most taboo of instruments in this setting, that did not stop artist Slushii from playing a good portion Blink 182’s “All the Small Things.” Much of the audience shouted along with their best nasal interpretation of one of pop-punk’s unmissable radio viruses. But it was one of the few oxygen-deficient moments of the evening. Rock just doesn’t echo well in this room, instead its treble-infused spikes bounce awkwardly off the edges. He later plays the intro to Van Halen’s “Jump,” which I’m told is unknowable to teens since a young pop singer didn’t recognize the band’s name recently. Just this week, a friend’s 19-year-old told me she didn’t know who Jim Henson is and I found that oddly comforting. We’re moving past the 20th Century, but it will always be online should they decide to explore. The crowd cheers the opening synthesizer chords to “Jump” anyway. Thankfully, Slushii drops the sample before the band kicks in. “Make some noise if you don’t give a fuck right now,” he orders the crowd. They comply. 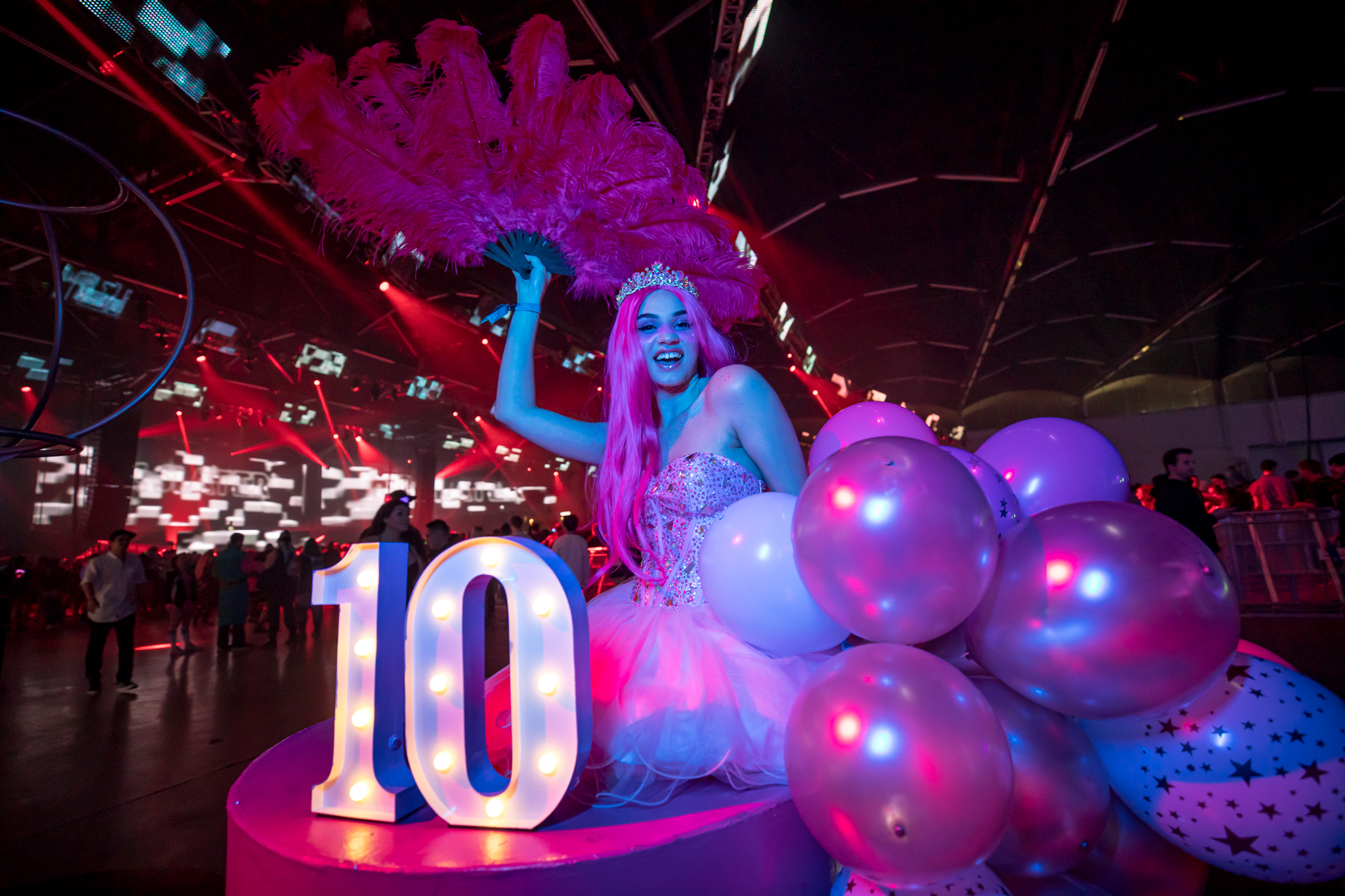 Drake’s music is still heard in sets this year, no matter how much controversy the reigning chart-king of his time draws. The theme song to the early 2000s animated television program Teen Titans also drew an enthusiastic response. Having Skrillex as a headliner and the heavy dubstep presence that permeated most of the sets was tempered with lighter and surprising moments such as Yung Bae working in both Junior Senior’s “Move Your Feet” and a Daft Punk track.

Saturday’s crowd felt far more packed and sweaty than Friday. The X-ed out eyes of Marshmello’s face mask were everywhere, the wearers vaping inside their costumes. A couple of fans got overheated and were taken out in wheelchairs by Dallas Fire and Rescue. Zomboy did his “wall-of-death” act, where he splits the crowd in two and asks them to collide, as he did at his Bomb Factory performance in 2018. I talked to a group who traveled from Austin and they felt that there should be more bars spread throughout the venue, as well as more art installations. It’s hard to imagine LAN cramming even more than it does in Dallas Market Hall, but should they decide to do this for ten more years, they are they are the team to make it happen.

Somewhere during the weekend, I snuck off at the last minute to Denton to see a benefit “dance party for the dogs of Denton,” according to the flier. It took place at Rubber Gloves Rehearsal Studios and included members of Neon Indian who had previously performed at Lights All Night in 2011, as well as other North Texas DJs such as Sober, Yeah Def, and Tim Funatik. A handful of cute and yapping dogs ran freely around the club. Although Rubber Gloves has been completely expanded, remodeled, and opened again under new ownership, the low-key environment still feels like another planet compared to the arena-sized dance party back in Dallas. Denton also used to have a big-name, multi-day event that drew big crowds to town, but like many similar casualties, it’s now just a faint live music memory. In an industry where so few things have staying power, it’s reassuring that at least one thing still does.