A theater full of people gathered on Sunday night to honor Bill Wisener, the founder of Bill’s Records and Tapes. He died on Saturday at the age of 75. Within a day of his passing, the lobby and hall of the Kessler felt like a sold-out concert.

The memorial saw a wounded music community giving a series of tributes lamenting the sudden disappearance of one of its most unifying forces. The reality of the situation was anything but quick. Wisener and his shop faced a noble and slow decline, evolving with one group of music fans after another in multiple locations as the industry sprang every imaginable format on a forever shepherded public. This 2009 profile by Zac Crain is essential reading.

In a city that can never stop comparing itself to the rest of the world, Bill’s Records and Tapes was a place where we could hold our heads high. At the peak of its size and power, the grocery-sized shop on Coit and Spring Valley was as good as any specialty boutique in New York, Los Angeles, or Berlin. It was beautifully mismanaged. To this day, I cannot wrap my mind around some of the things I found at the bottom of those nicotine-stained boxes.

For an adolescent living only through magazines, the enormity of the place and its deathless overstock was an overwhelming escape into other realities, lifestyles, haircuts, curse words, bad vibes, hardcore punk, torch songs, techno, and the endless ways we sell the idea of cool back to ourselves. Bill sat in the middle of the mountainous inventory, cigarette in hand. He hunched over the counter and declared prices as a sort of expensive Zen philosophy as opposed to any kind of fair profit margin.

The often-steep prices were a great introduction to the adult economy for Bill’s many teenaged customers. I’ve recently wondered if he was actually from the future. Wisener’s price points seem perfect for 2020, where even a mundane dollar-bin album is treated like some rare collectable at notorious thumbed-scale chains like Half Price Books.

The memorial for Bill Wisener drew a number of music insiders, old customers, new customers, neighbors, art world figures, friends, a sports broadcaster, and record store clerks—both former and current. There was an abundance of talented DJs, both of the radio and club varieties. Every joke about the mystery of Bill’s “import” pricing was a hit. Every mention of Wisener’s quirks was met with knowing laughter and applause.

A lot of speeches had the qualifier of “I didn’t expect to get up here,” which is what people say when they are inspired, maybe a little tipsy, or both. One young Bill’s shopper drove to the memorial from nearly two hours away, describing Bill as “if Mr. Rogers chain-smoked and owned a record store,” much to the delight of everyone.

A lot of rock stars and rappers met Bill. He’s famous. I even found a shout out to him on AR15.com. Founding members of The Cure and Radiohead shared remembrances on Twitter.

I knew Bill Wisener. He ran a record store, Bills Records In Dallas for more years than I care to remember. It was literally his life. I swear every record in the world was somewhere in that old store on Spring Street…

RIP Bill Wisener, the kindest and coolest record store guy in America. On the too-rare times we were in Dallas in the 90s, I’d hare to his store and buy fab vinyl and cds. He once very kindly just gave me a rare Japanese only Joy division box set.

An uncredited hero of the Bill’s Records legacy is Vikon Village, the oversized Garland flea market on Jupiter Road where he got his start, after graduating from assisting with his mother’s business. Aside from its fake ID charm and collective general sketchiness, Vikon has been known to collectors of all manner of curio as a haven, but especially for music and books. This magazine had this to say about the place in 1979:

For a city that boasts of its sophistication, Dallas offers its bibliophiles few opportunities for self-actualization. But one of the best is Mary Anne’s Books at Vikon Village, an enormous indoor flea market that not only maintains a complete collection of National Geographic back to 1920, but offers a large selection of paperback books at one-third the original price.

Practically growing up at Vikon, I was a Mary Anne’s shopper around the same time I discovered Bill. While he had his own storefront it never lost the ramshackle feel of the flea market environment. The army of shrewd clerks at Bill’s was legendary, an opinionated bunch who could tell you why what you liked sucked and why you needed to buy this or that record instead. My high school band would go there just to argue with the staff. In the early years of the internet, Bill’s was the internet—a dangerous explosion of culture in one contained space. We had never felt so understood. 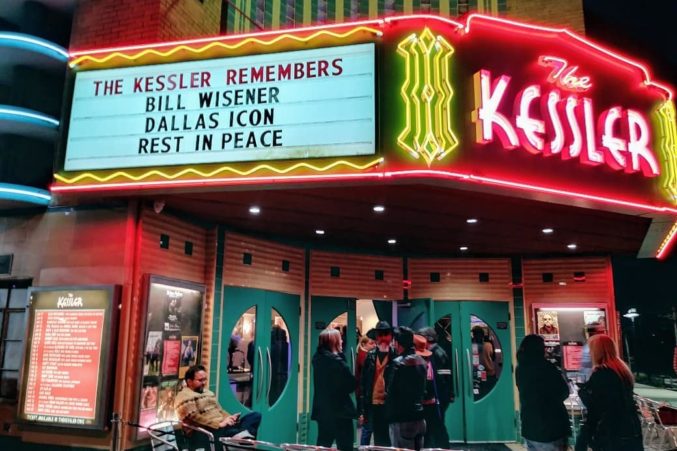 The marquee at the Kessler in Oak Cliff following the death of record store owner Bill Wisener. The memorial was held on January 12, 2020. (Photo by PiKaHsSo Verbadelyck)

Judging from last night, Bill was clearly loved by all. But he aggravated some customers not used to the gray market world of a living, breathing record store. My mom was one. I demanded a bootleg VHS tape of Pink Floyd’s 1980 concert in support of The Wall for my 14th birthday in 1994. It was $40. That was the equivalent of $69.42 in 1994, for a clunky video tape with a Xeroxed cover that was likely not exactly in HD.

She refused. “Have a nice day,” said Bill sincerely as he placed the tape aimlessly in a stack that would likely not be re-shelved anytime that February. “Too late,” she said in her most Flannery O’Connor-esque outburst as she stormed out the door. I was mortified. My father said I couldn’t hang out at Bills’ because it was a place “where weird people hung out” with a vaguely homophobic undercurrent to the rule. He couldn’t have come up with a better advertisement had he been paid.

The layout of the Spring Valley location of Bill’s was a perfect physical representation of what was happening in music in the late 20th Century. A dedicated and very intimidating dance music section filled a different room of the store; it was where timid punk fans dare not tread. The inescapable look and sound of The Orb and 808 State loomed over the more obscure selections. I have never met a staff that knew as much as that rotating group of part-timers did and I likely never will. Former Dallas DJ Rodrigo Diaz, now based in Bogota, had this touching post in honor of Wisener’s encyclopedic range of intelligence gathering:

I really really do appreciate everything bill did for Dallas. He also had a weirdly high level knowledge of strictly rhythm, Chicago trax, plus 8 and other iconic labels, and he sure as shit knew how to charge u for them. RIP Bill

While this sort of dedication to excessive music knowledge is likely very silly and arbitrary to most people, it’s hard to articulate how much this has meant to the various subcultures that have come and gone in this city over such a long period of time. The group of musicians in the room last night also included people who eventually opened their own record shops, some of the most palpable aspects of Wisener’s legacy.

Bill’s Records was less of a dance and rock music hotbed over the years except to the most dedicated collectors, especially when it switched locations to Lamar Street. At some point the store became more connected to the world of contemporary independent country and singer-songwriter styles such as those played on KHYI 95.3 The Range. It made sense, as this music often struggles to find a home, even in a country-friendly place like Dallas. Suddenly, my parents were huge fans of Bill’s Records.

A lot of last night’s speeches and personal remarks contained the line, “the last time I saw Bill.” They were choked with various forms of regret or an admittance that you did everything you could in someone’s final days. Friends such as former employee Douglas Martin talked about how they were there on Bill’s final night. He worked at the store from 1984 to 1992 and has been heavily involved in the store’s operation of late.

Artist and curator David Quadrini seemed particularly shaken up. “I’m just surprised that I’m surprised,” Quadrini said. He stated the importance of what Bill had taught him about architecture and how he had been a customer since he was 12. He compared Wisener’s smoking habit to the legendary Fort Worth native and art critic he knows, Dave Hickey. Quadrini lamented missing a Thanksgiving call from Wisener. He looked around the room with a longing expression.

I have spent the weekend thinking of some of the last times I saw Bill Wisener. Once, I had the fortune of being sat right next to him for a Leonard Cohen performance, an artist he greatly admired. We chatted and joked about the 1990s during breaks in the performance. I felt so lucky to share that experience. I felt like I was with the wisest man in the room, besides the poet onstage.

I went to his Lamar Street location sometime in the past couple of years and I put a small stack of items on hold. He remembered everything about my taste, which he saw evolve from the age of 13 until nearly 40. I remember being astonished at the number of music publications stacked about the place. Hidden among all those records was a shadow library of rare magazines, mostly of the breathless and sensational British music press variety. I don’t know what’s going to become of Wisener’s legendary collection and right now, I would rather not know.

I never picked up the items. Selfishly, I want to think that they sit behind the counter, just a quiet little stack of gems still there for me. Forever.