ALG Collective only came together about a year ago, but for its four artist residents, it’s quickly become the partnership of a lifetime. The studio and gallery founded by Anna Curnes of Anna Lou Glass opened on Dragon Street in May, and it debuts its second exhibition this Saturday. Titled A Rising Tide, the show is a celebration of how the four women have come to lift each other up in life and in art.

The artists don’t have much in common when it comes to their style and process. Annie Griffeth makes pop art. Christi Meril specializes in abstract expressionism. Mellisa Ellis creates sculptural oil paintings. Curnes works with glass. Still, they inspire and push one another, sharing an uncommon bond that extends inside and outside of the studio. 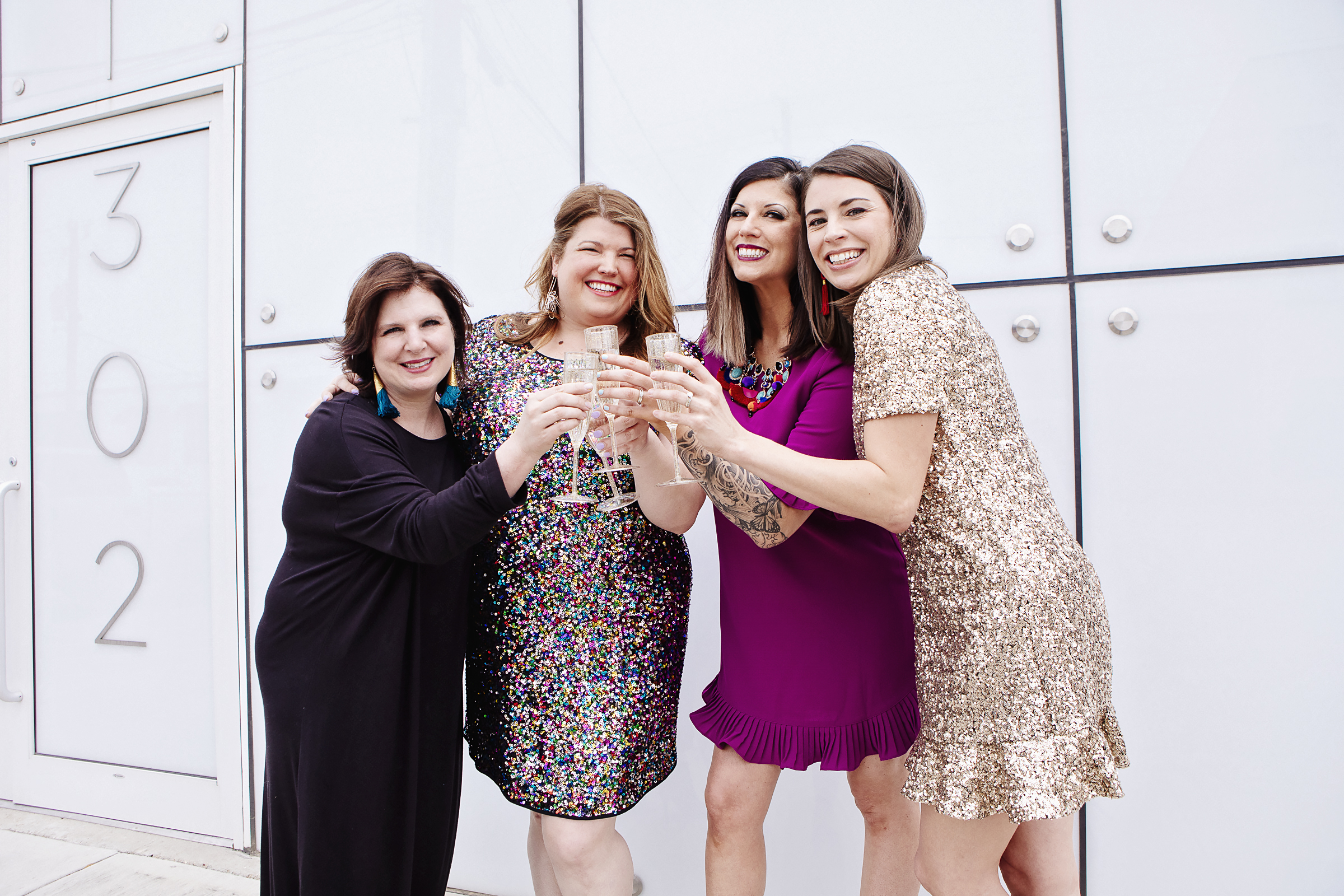 “The energy–it makes me so happy, because we really have become like sisters. It’s way beyond friendship. We’re stuck with each other forever. It’s just bizarre how that can happen in a year’s time,” says Meril.

“I think part of that, too, is that all of us have experienced a significant loss in our lives, and what that does is it helps you prioritize,” Curnes chimes in. “You know what’s important, and you know what’s not important. It lets you skip all the petty stuff, and you can grow together and support each other.”

ALG Collective has been a safe haven for the artists to work through their feelings of grief and channel them into something beautiful. 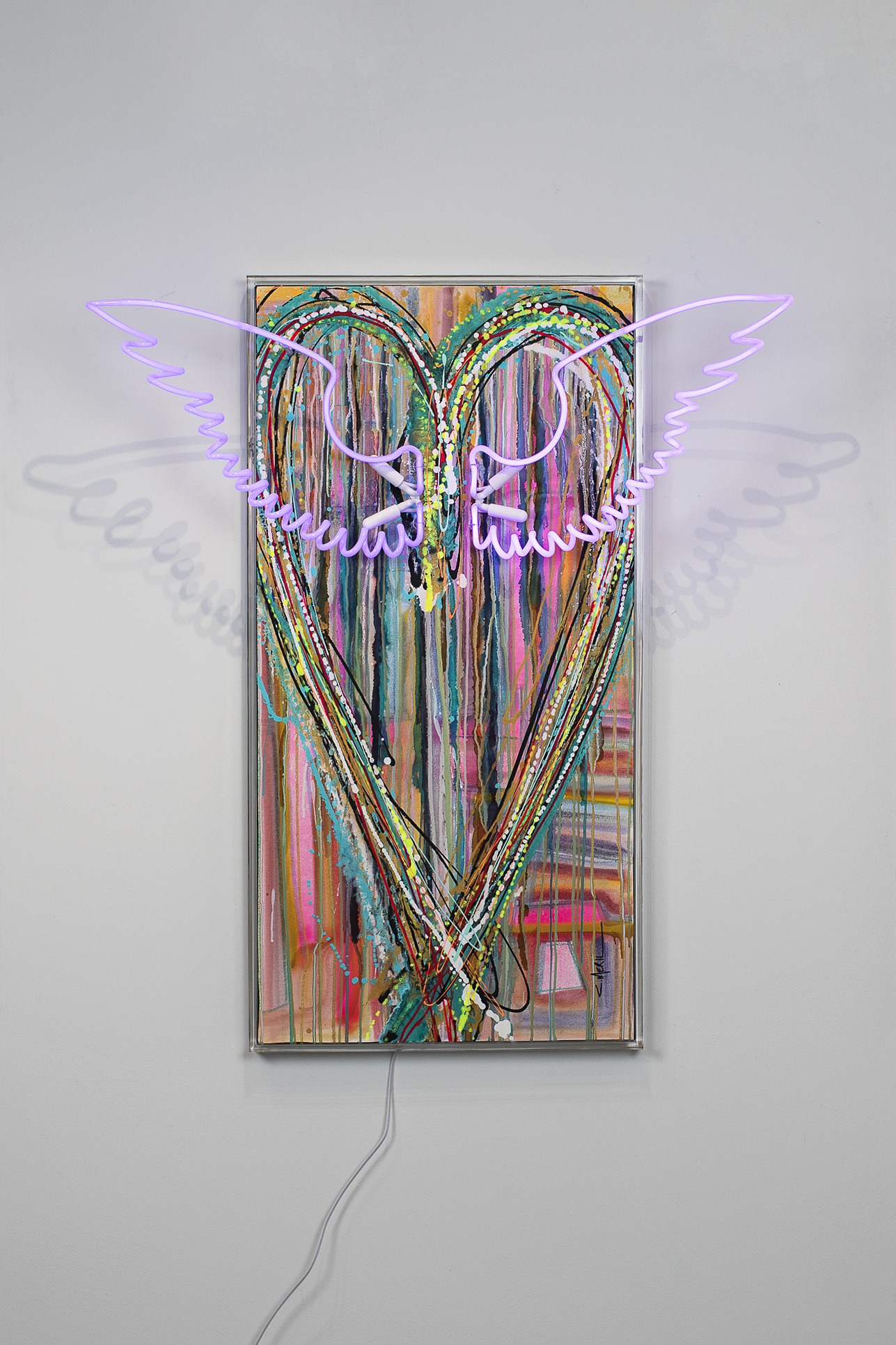 “When you’re creating, it’s so important to be emotionally raw. We have that safety, we have Kleenex. I lost my mom in March, and I couldn’t do this without these women,” says Meril.

Even though the group was brought closer by grief, their work reflects a story of hope and happiness. That resilience shines through in the show, which is composed of entirely new work. Christi Meril has given her vibrant, abstract paintings a unique twist with touches of neon, something new she’s experimenting with.

“I really do focus on message and positive vibes going out into the world…messages of hope and grace,” she says. 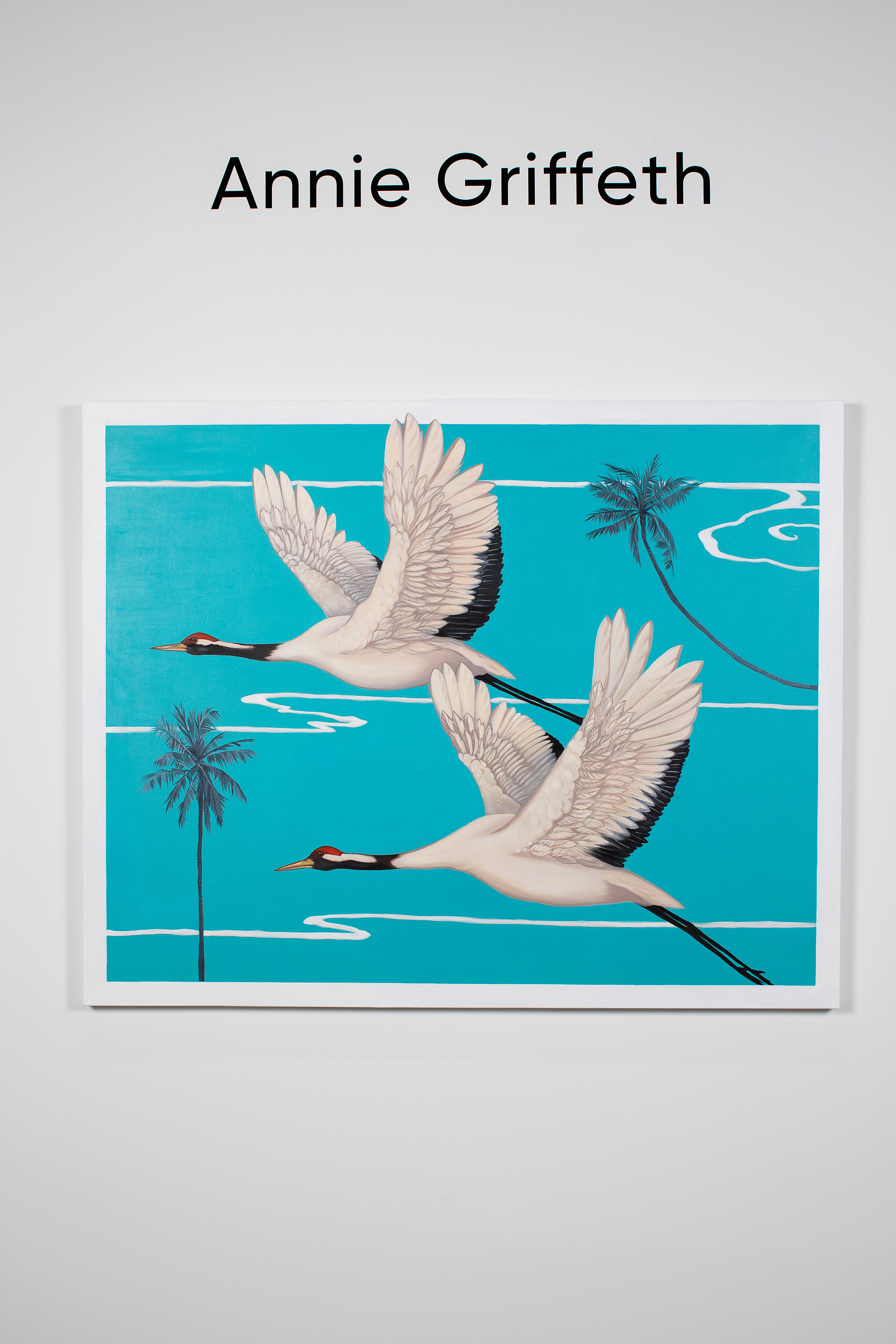 “If You Are Free, Free Someone Else,” Annie Griffeth, 2019. Photo Sara Kerens.

“The majority of my work is allegorical. I use universal and personal symbols to create a visual narrative, or a message, in my work. I feel like the role of an artist is to draw attention to what’s important in life,” says Griffeth.

One of her new paintings, a quartet of silver cranes flying across the canvas, represents the four members of the collective. It also nods to the number four, which is the number of stability.

“It doesn’t have to be a meaningless, beautiful thing. It can be something very meaningful that’s also nice to look at,” says Griffeth.

Melissa Ellis, who uses oil paint to create patterns and shapes on canvas, took the exhibition as an opportunity to branch out with her work. While she typically covers the entire canvas with thick layers of oil paint, she began using a simple, solid background to highlight miniature sculptures fashioned out of the paint. It’s an idea that came from the simple act of cleaning off her palette knife. 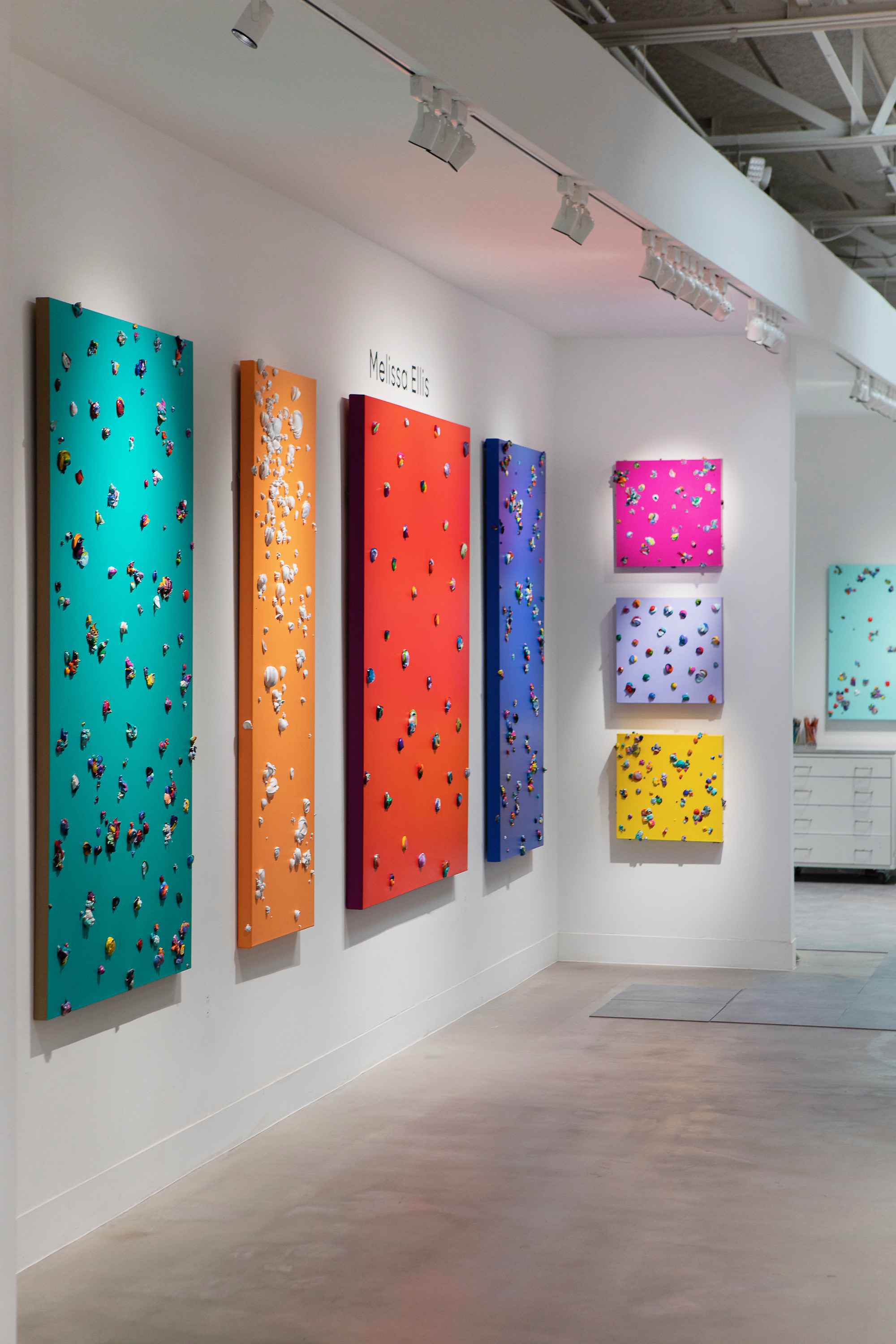 “This is the first time I’ve done these kind of works. I’ve always done really heavily textured, sculptural oil paintings, but I want to grow and push myself and try new things,” says Ellis. “I wanted to let every piece shine on these rich, rich background colors, like an individual piece of sculpture on the canvas.”

ALG Collective Founder Anna Curnes fell in love with glass art when she was in the midst of a tragedy, and it’s continued to bring her peace ever since.

“My whole thing is trial by fire and beauty by brokenness. When my sister died, I was in a million pieces,” says Curnes. “I started this glass class, and it’s literally breaking the pieces to put them together in a way that’s far more beautiful than it was before it was broken. It’s life, it’s grief, it’s healing. Everything about it was so healing.”

Over the summer, she took a trip to the Greek isle Santorini, which was quickly derailed by issues in her personal life. However, the locale was so moving that the situation became another source of artistic inspiration, shaping her most recent work. 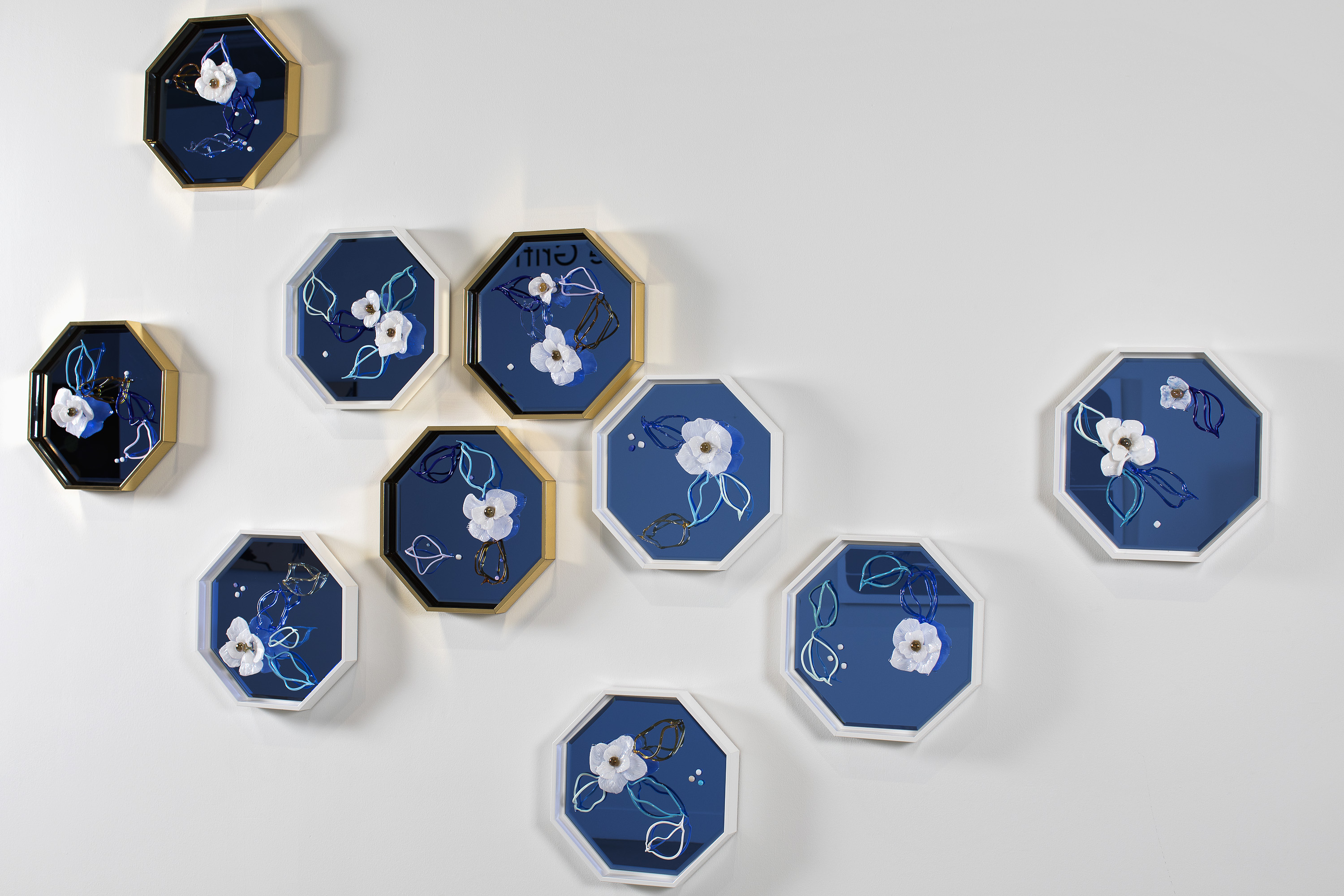 “I found myself in Santorini. This place that was so beautiful, with this inner turmoil and I still felt like I was being fed internally by all the blues and whites,” Curnes says. “It also reminded me of the blue and white center of my torch, which is the hottest part of the flame. That’s the purifying bed. That’s where the toxins get released, that’s where real transformation occurs.”

All four artists will be showing off their new pieces at the opening reception for A Rising Tide this Saturday from 6 p.m. to 9 p.m. (RSVP here.) ALG Collective will also be part of the Third Thursday Art Walk on Dragon Street taking place next week from 5 p.m. to 8 p.m.