Editor’s note: There are plenty of happenings in Dallas this weekend. Here, we’re honing in on one. See the full schedule on our Things To Do page.

When we announced the impending arrival of The Other Art Fair back in June, readers reacted with mixed feelings. For shoppers, the event presented by Saatchi Art is an affordable alternative to the Dallas Art Fair, and a great way to learn about up-and-coming talents. For artists, though, it’s a big gamble with an uncertain payoff.

Because the fair exhibits individual artists rather than galleries, every artist must pay a $1,680 fee to participate. Considering that the fair offers pieces for as low as $150, it’s not the greatest deal for an emerging artist–even though that’s who it’s targeting.

The Other Art Fair may not be as exclusive as the Dallas Art Fair, but it’s not exactly accessible, either. Several local creatives voiced their frustration about the barrier to entry, also citing poor communication on the part of the organizers. Nevertheless, Saatchi has recruited more than 120 artists to participate in Dallas’ first edition of The Other Art Fair, happening this weekend at Dallas Market Hall. Fortunately, at least one local artist has had a positive experience with it.

Dallas-based Abi Salami will bring a handful of her vibrant, expressive paintings to the fair this weekend. The Nigerian-born, Dallas-raised painter quit her corporate job a year-and-a-half ago to pursue her life’s passion. Since then, she’s shown at Vignette Art Fair, Craighead Green, the African American Museum, Viridian Artists Inc. in New York, and more.

We caught up with Abi ahead of the big weekend.

What were you doing before you became a full-time artist?

I worked in finance. I was a director of investor relations for a company that was called FelCor. I got laid off–the company was purchased by a competitor and pretty much everyone got laid off, ultimately. I had the option to go back into corporate and get another job or follow my passion of being an artist, and I took the crazy route!

How would you describe your style?

It’s a fusion of surrealism–Dali comes to mind, Frida Kahlo–it’s a fusion of that and my African heritage. I try to put a lot of elements of Nigerian culture in there. Usually through fabrics, through hairstyles. 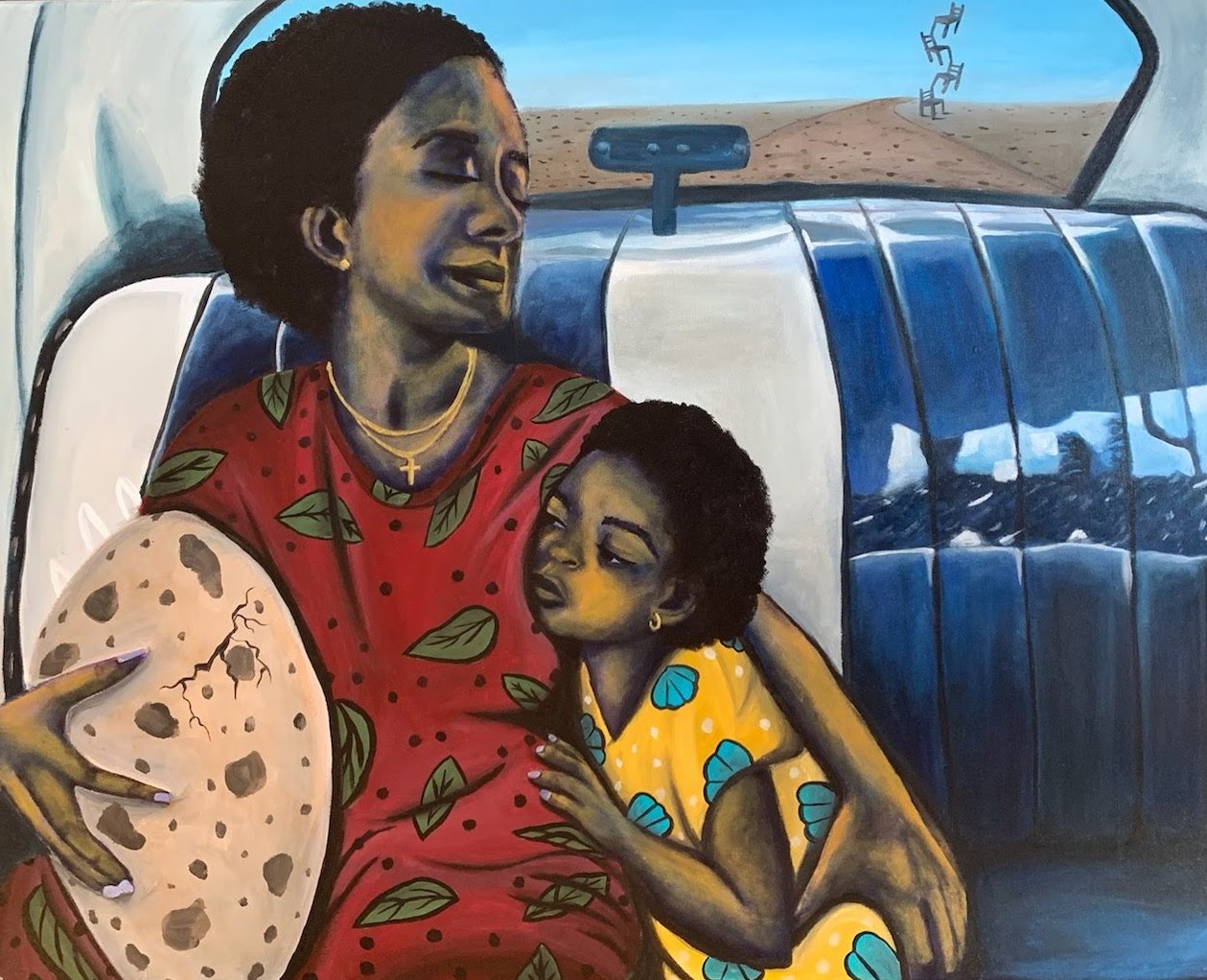 What subjects interest you?

Most of my work recently has dealt with bringing awareness to mental health. I suffer from depression, specifically, I’m diagnosed with bipolar disorder. In the African culture, it’s very taboo–in most cultures, it’s very taboo.

Growing up with depression and parents who didn’t understand it, and weren’t willing to discuss it, was very challenging. Conditions get worse, especially if you’re not treating them, so dealing with that and finally being able to get treatment, and getting to a point where I feel stable, I realized that there are so many other people who are suffering still and don’t know how to get help, ask for help, or even talk about what’s happening to them.

Most of my art has to do with what’s going on in my brain, so the more I started painting, and openly talking about it, people started messaging me and saying ‘oh my god, I’ve been through the same thing.’

That’s been my central focus, bringing awareness to those kind of issues and trying to create a dialogue.

Tell us about what you’re bringing to The Other Art Fair.

I’m bringing the same surrealism slash Nigerian heritage slash mental health awareness pieces that I’ve been doing. A lot of pieces are inspired by surrealism, so it looks like a normal scene, but you look closer and you notice something is off. There are symbolic images in there that let you know this is a surreal scene.

The whole point is to create these scenes that are really beautiful from afar and make you want to look closer, and once you start looking deeper, you start wondering, ‘what’s that?’ And hopefully, you will ask me and it can start that dialogue. It’s typically something that people shy away from, so this is a way I kind of trap them.

It takes people’s guard down because they don’t see all these dark things–it’s people smiling, people laughing, bright colors–and they feel like it’s something they can actually talk about. 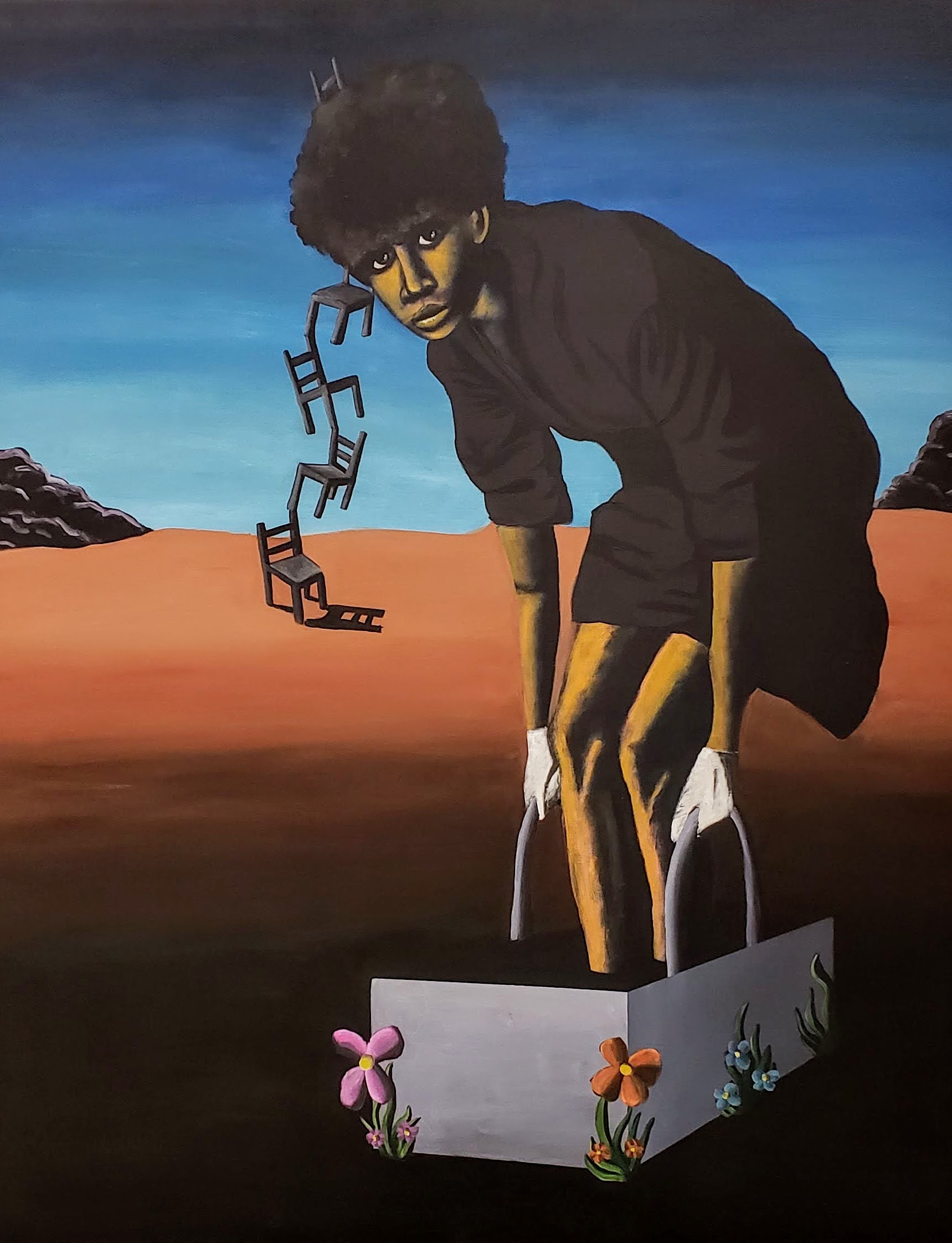 What are you looking forward to this weekend?

I’m excited to meet the other artists, see their work, and, you know, just get that community coming together here in Dallas. We need more things like this.

I understand that The Other Art Fair is very expensive, so it’s not necessarily a practical thing for all artists, but we need stuff like this that’s on this level of fine art. We do have a lot of art festivals in Dallas, and that’s fine, but in the sense of having something that’s a little more upscale, indoors, that feeling of, ‘you’re coming to see quality art, so bring your wallet.’ We’re not drinking beers and eating funnel cakes! It’s a nice thing. And it’s accessible to artists that aren’t represented by galleries.

We first met when I interviewed your boyfriend, Jammie Holmes. What’s it like being in a relationship with another artist?

I think Jammie and I make a great team because we’re artists in different types of ways. Because I come from a corporate background, I’m more into details, the administrative planning, all that stuff, and he’s more of a big picture thinker. So, we work together and help each other out, not only with just the creation, but the selling and the business side.

As far as influencing each other’s style, his style is very free and loose and emotional and raw, and that’s forced me to really dig deeper into my art and try to really push the envelope of getting emotion out there.

I guess for him, he’s learned a couple technical skills for me. His work is way looser, and when we started dating, he started to add a little more technical stuff while keeping his raw style. It’s cool to see how his work and my work has advanced in the nine months we’ve been dating. It’s like night and day, it’s crazy. Especially for me. He’s my biggest cheerleader.

Where To Shop In Dallas This Weekend