After closing over the summer for an extensive, three-month renovation, the Amon Carter Museum of American Art in Fort Worth reopened this weekend with a new perspective. The museum has undergone more than a makeover; they’ve pressed the redo button and created a new narrative about American art.

The galleries now have mobile walls and are thematically organized rather than chronologically ordered. The downstairs Modern America gallery brings together contemporary photographs and twentieth century paintings to look at the breadth of the country’s identity. A corner of the gallery looks at energy and work, placing an Alexander Calder sculpture behind a Lewis Hines 1921 silver print photograph Steamfitter.

Upstairs, the Legacy Galleries display pieces of the Carter’s large collection of Frederic Remington and Charles Russell art of the idealized west of cowboys and Indians. Added is a display case for studying the records of the works. Those records include notes and receipts for many of the cowboy sculptures from the archives of Roman Bronze Works, housed at the museum. The foundry was responsible for creating the majority of early twentieth century American sculptures. 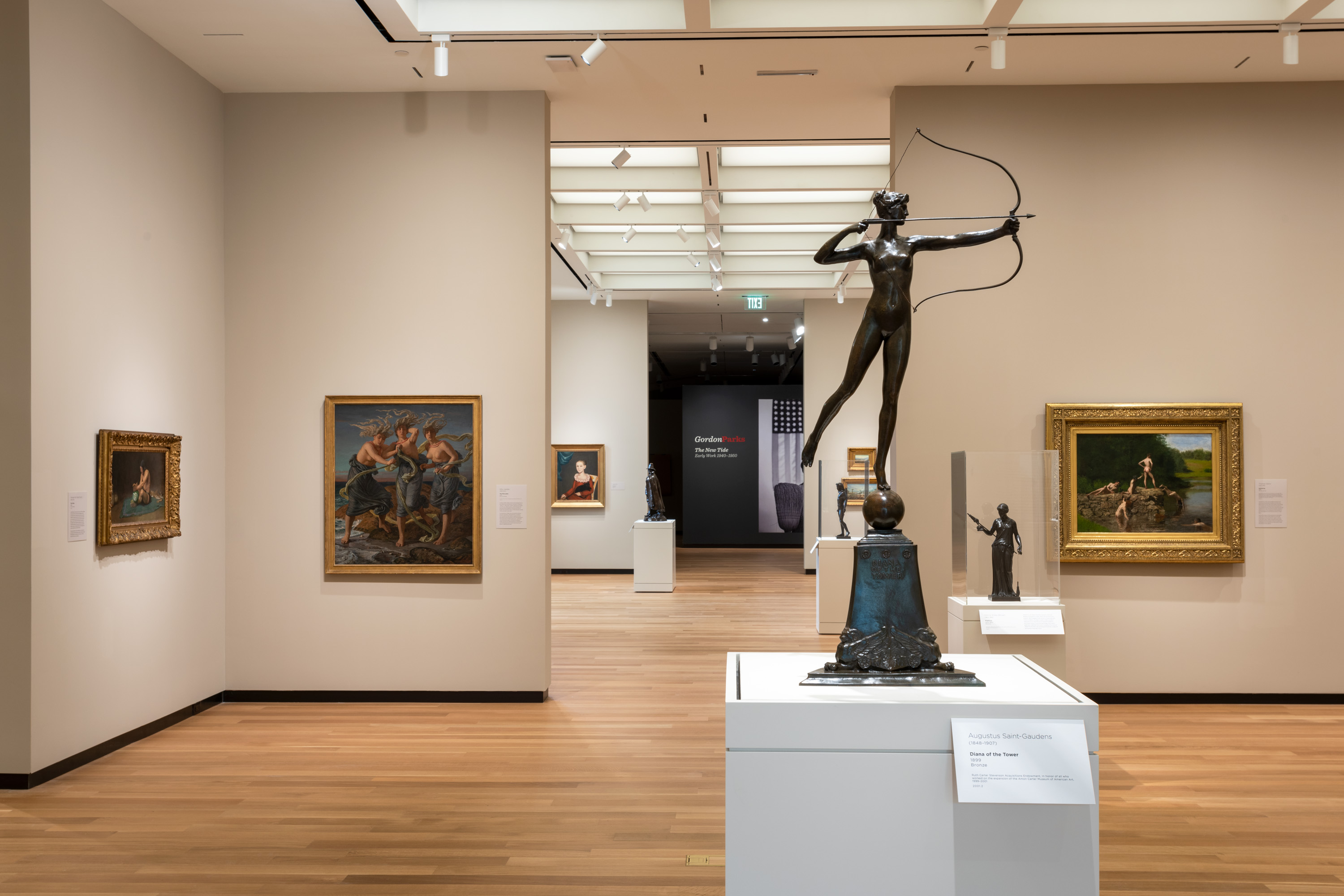 The museum’s redo is based on visitor surveys and curatorial input, making for a roomier, less claustrophobic exchange between the artist and viewer. New mobile walls open up more than 4,500-square-feet of special exhibition space, allowing for considerably more diverse display of multimedia works, and the collection itself. The carpet is gone, replaced by white oak wood, and new LED lighting suggests natural light flowing in from above.

The links between the original, 1961 limestone and glass entrance and the subsequent expansions are also more pronounced, creating a connection between the progression of the late architect Philip Johnson’s multiple expansions and the original Texas shell-stone and bronze framed glass portico.

The permanent collection mingles with the three special exhibitions on both floors. Finally, the Carter embraces what it means to be an American.

On display in one special exhibition gallery is a colorful commission by queer, first generation Latino-American artist Justin Favela of Las Vegas. Puento Nuevo is a floor-to-ceiling installation using piñata material pasted onto paper. The work is fun, but also serious. 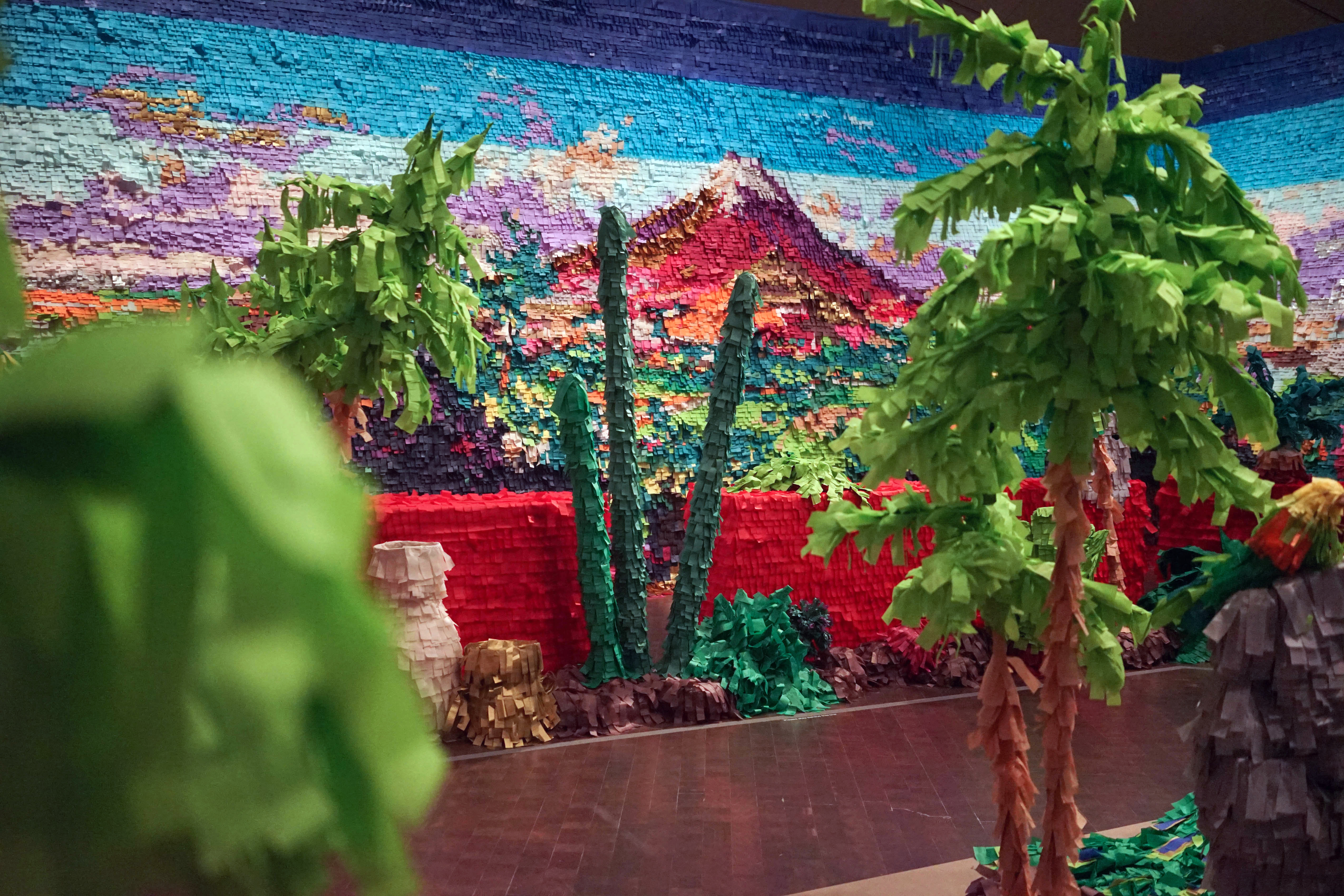 Favela likes to invoke the past, he said in a statement, “not only to celebrate the past, but to critique the exclusion of people of color in that very same history.” When Curator of Paintings and Sculpture Maggie Adler asked Favela to choose works from the collection, he chose 19th century lithographs of Mexico by Casimiro Castro. Puente Nuevo translates to “new bridge,” connecting both the train bridges seen in the print and his linkage between past and present.

The long gallery leads to the installation of a commission, Plexus no. 34, by Gabriel Dawes of Dallas, another gay artist. The colorful thread installation soars over the atrium, serving as one of the sight lines from the second work floor galleries.

The work is definitive to the collection, as is Thomas Eakins’ 1885 oil on canvas Swimming and Barbara Morgan’s 1935 gelatin photograph Martha Graham – Ekstatis (Torso) of the famed choreographer.

That piece is on display in the exhibition Set in Motion: Camille Utterback and Art That Moves. Utterback is a California new media artist who works with technology to create interactive experiences. Her Untitled 5 takes up a new media space to show video art and allows staff to curate shows including new media, which was previously unavailable. When approached, the large animated painting interacts with a camera connected to an algorithm that changes the brushstrokes, thus the painting itself. Utterback is interested in motion and technology, and how women artists using various media have moved their bodies to create art. 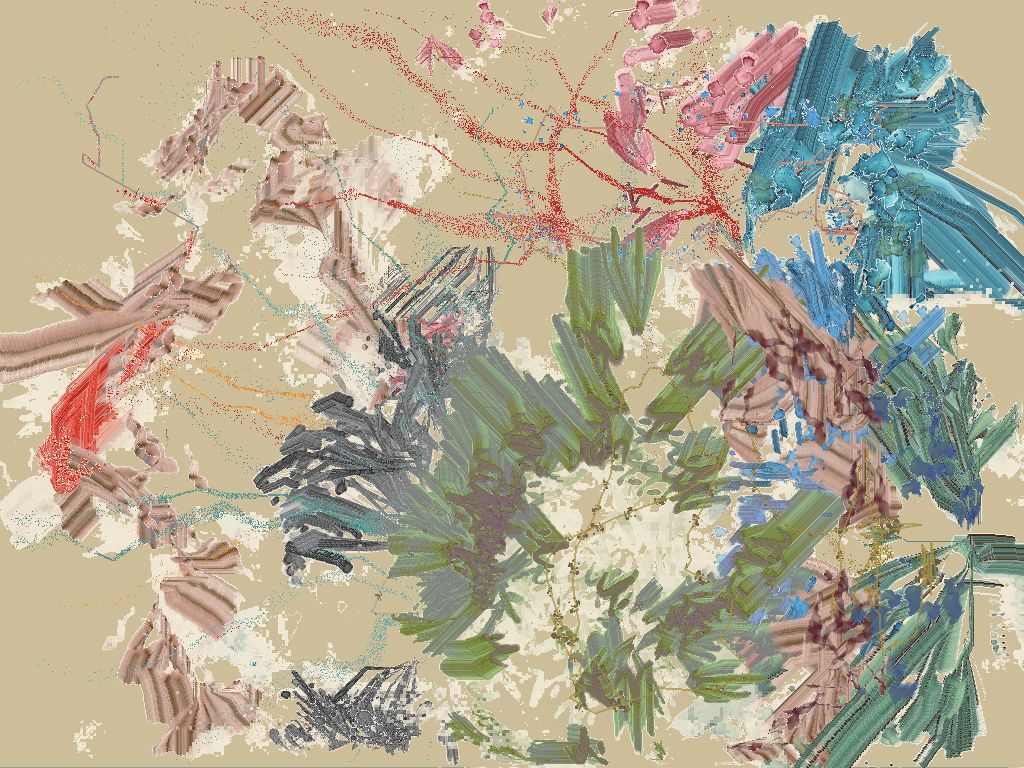 Finally, one of the highlights of the reimagined Carter Museum is the touring show Gordon Parks: The New Tide, Early Work 1940-1950. The exhibition of the African American photographer’s rich formative years crosses his time as a commercial photographer, government propagandist, portrait photographer, and photojournalist. In Minneapolis, St. Paul, Chicago, New York, and Chicago, he lit scenes to dignify celebrities, oil workers, and poor families. As a federal employee of the Farm Security Administration and Office of War Information, he travelled to areas of those major cities to show racism and poverty. He later moved to the private sector, photographing the operations of Standard Oil Company, though he hesitated to support the conglomerate. Even when he became the first African American photographer for Life magazine, he still faced barriers: a story on display about racial segregation in his hometown in Kansas never ran.

The Carter is still a research museum, and one of the few associated with the Smithsonian.

The changes thus stretch to the library, as well. They added center for the study of the collections of artists, individual, and institutional archives. Just as the museum is elevating women, people of color, and queer artists, they still have their donor-defined limits. So, the museum established of the Gentling Study Center dedicated to the research of late Fort Worth artists Scott and Stuart Gentling.

The donor-driven move brings together collections from the brothers’ estate, including their personal papers, and transfers ownership of other works from the Fort Worth Museum of Science and History. Whether the artists really deserve a full-time archivist and a research fellowship dedicated to the advancement of their work remains to be seen.

The Carter may have grown significantly over the years since it was founded in 1961–but for the first time, the museum actually presents an experience telling the American story.