On the corner of Melba Street and N. Madison Avenue in the Bishop Arts District, a new, imaginative four-story mural soars above passersby. Over the course of about two weeks, what was once a drab brick wall transformed into a striking configuration of color and reverie. The painted scene captures a woman peacefully strumming on her acoustic companion, just as a lingering breeze catches strands of her polychromatic locks, and a golden sun sinks in the distance.

The mural is a visual stunner, so it will likely surprise you to learn that the artist, John Bramblitt, is blind. Due to complications with epilepsy and Lyme disease, Bramblitt lost his sight in 2001 as undergrad at the University of North Texas. Even before his blindness, Bramblitt was a creative, finding solace in drawing and his creative writing studies. Deep depression and loneliness plagued him for a time after, as he struggled to adjust to life without this sense that was so thoroughly attached to the activities that brought him the most joy. Eventually, though, Bramblitt discovered a form of creative expression that, in some ways, brought him out of the darkness: painting.

Like most skills, Bramblitt’s grasp on paints and how use them effectively did not come all at once. In fact, his artistry would take some time to flourish, as he had the cane and braille to master first. Perhaps unsurprisingly, honing these skills, and eventually learning how to travel independently, encouraged and pushed Bramblitt to pursue creativity again.

“After about a year, I started learning how to get around with a cane. Finally, I could learn how to walk to the university on my own,” Bramblitt says. “I began to think of the curbs as lines, and I thought if I could travel those lines on a canvas, if I had lines I could touch, I could navigate across it too. So I started using paint to just make lines and feel.”

These lines of thick paint functioned like a topographic map for Bramblitt, allowing the artist to use touch to orient himself rather than sight.

Colors came later. Those somewhat familiar with paint may recall that each type–whether oil, acrylic, or watercolor–has a different texture. While some paints mimic the behavior of water, others feel more like syrup or paste to the touch. Incorporating painting mediums furthers the viscometric spectrum, making it easy for the artist to differentiate between paints, beyond the braille labels. Bramblitt began with white and black, and he eventually expanded to the wide selection visible in many of his other compositions. Lines matured into confident brush strokes, which, in turn, blossomed into beautifully vibrant works of art. 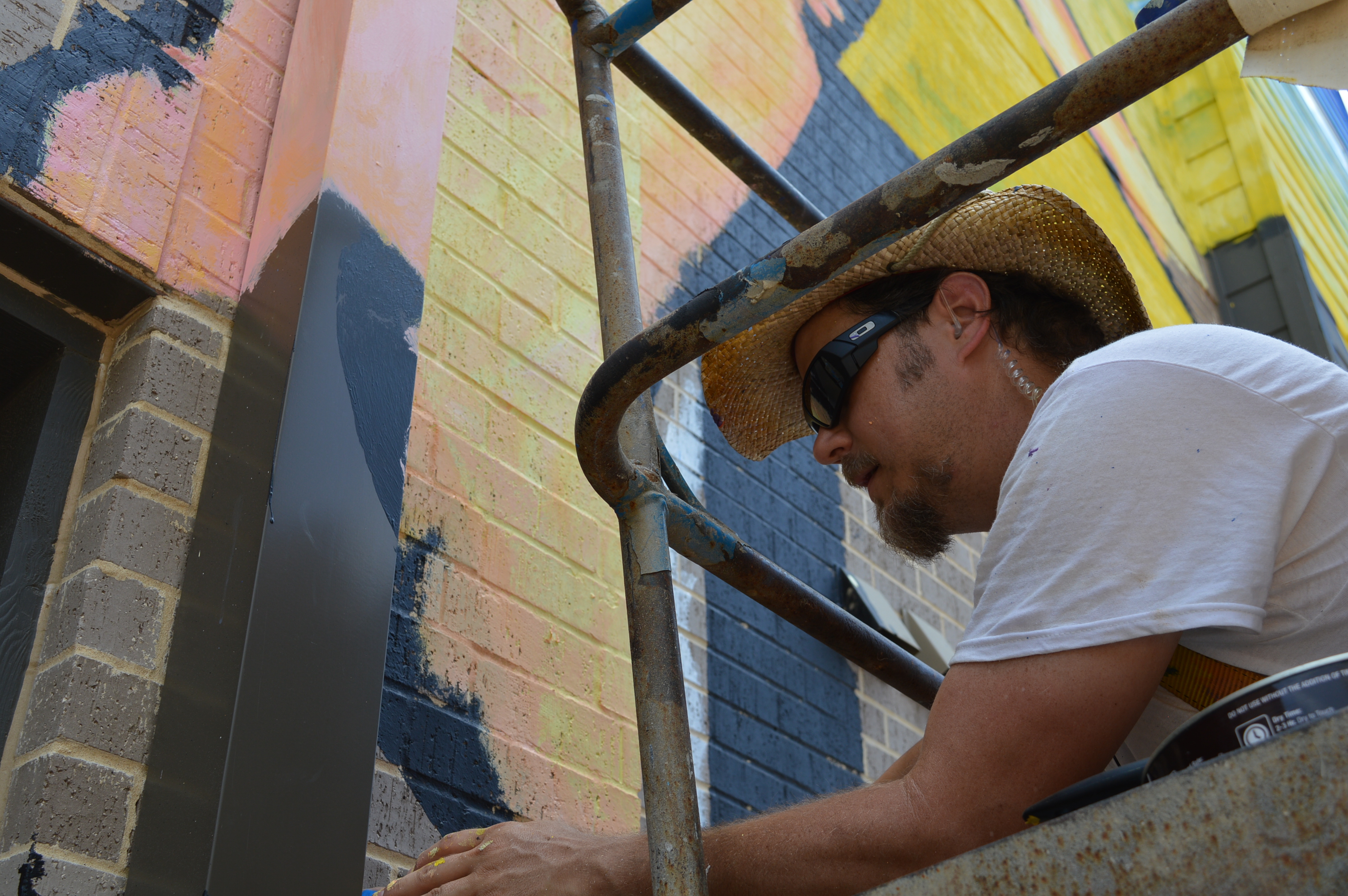 Working with murals is a bit more complicated due to scale, though Bramblitt enjoys the work and is motivated by the challenge. The artwork in Bishop Arts will be his fifth large-scale mural, the first of which he painted in New York for World Sight Day. Bramblitt says one of his favorite things about working on this mural was collaborating with his wife, Jacqui Serie, during the process. While he painted from the lift, Jacqui could help him with certain details and to orient himself.

“The really cool thing about [this mural] is I can radio down to my wife. She’s really good at being about the describe things. She knows my artwork better than I do practically, so I can ask her ‘Where am I?’ or ‘Point me to the guitar,’” Bramblitt says.

Currently, Bramblitt is a professional artist living in Denton, Texas. His art has been sold in over 120 different countries, and his name continues to buzz around news outlets. When he’s not at home painting in his studio or spending time with family, Bramblitt often travels to meet with various museums and nonprofits to develop inclusive programs, no matter the person’s “ability or disability.”

Bramblitt shares his thoughts on what it means to be a “blind artist,” and how his perspective of himself, both as an artist and as a person, has changed since his first dabbling with the brush.

“At first I thought blindness made me different, and then after a while I realized it makes me more like everyone else. Everybody, at some point in their life, faces something unsurmountable, or they think they can’t get through it,” Bramblitt says. “I used to not put ‘blind artist’ on anything, and then I realized that I just had to own it. It’s who I am. It’s just one characteristic that makes me, well, me.”

Help So-So Topic Get His Music Back