Never have I ever watched the ‘80s soap opera Dallas. I’ve heard about it, though. Not from people in Dallas, more so from people who’ve never been to Texas. I know that it involves oil tycoons, a melodramatic family, and a lot of loud hairdos. But, like many other born-and-bred Dallasites, my knowledge of the series stops there.

This weekend, a group of local artists are tackling the city’s most infamous cultural relic and bringing it into 2019. Dallas The Remix is a stage dramedy inspired by the television show– including everything it was lacking.

“I had never seen it before, and I don’t think anybody in my generation has really seen it. However, moving to Texas, to Dallas specifically, I have a lot of friends from Chicago who were really confused and were laughing about it and those stereotypes,” says Krissy Bodge, who co-created the play with artist and D contributor Darryl Ratcliff. “I was intrigued that nobody I knew had seen it.”

The two decided they wanted to put their own imprint on the story and modernize it to something that actually represents the city. The project received funding from the Office of Cultural Affairs through a Cultural Vitality Program grant.

“I had always been annoyed that it was cultural baggage I had to deal with, being an artist from Dallas,” adds Ratcliff.

The most obvious change in Dallas The Remix is that it’s not so incredibly white. Cain Rodriguez, a young Mexican American, directed the play. It has a majority minority cast, most of whom are women. JR Ewing is played by David Jeremiah, a young black actor. And Bobby, played by Naeaidria Callihan, is a bisexual black woman in this version.

“Dallas is not a majority white city. It’s not even close. But the representation, especially in the show Dallas, would have you believe it’s 95 percent white. That was an aspect that we wanted to subvert in the show, but not for the sake of subversion,” says writer Stephen Gardner.

The crew watched the first few episodes of the show together to get familiar. Then they took the character names and the soap opera tone and ran with their own interpretation. Teresa, who was a maid with no lines in the TV show, is a successful business person and a central character, portrayed by Priscilla Rice. Tilly, another one of the very few minority characters in the original Dallas, also has a larger role in The Remix.

“We did take a couple non-white characters who did not get agency and gave them fuller roles in this thing where they have agency, they have power, they have control,” says Rodriguez.

Joshua Kumler and Gardner, who work together on Kumler’s comedy sketch show Bar Politics, were the lead writers for The Remix. They reworked the storylines to include local political issues and history, attending community meetings and interviewing longtime Dallas residents to get a feel for the era. Contrived as Dallas was, some of the plot points of the TV show proved to be lasting threads in the fabric of the city.

Dallas The Remix aims to knock down those doors under the guise of a soap opera.

“Our hope is that the show is fun enough that people just go in blind and find enjoyment from it but the political undertones will sneak up,” Gardner adds.

Dallas The Remix is a one-time affair–Saturday, July 20, 2:30 p.m. at the Black Box Theater at The Fretz Park Library. Tickets are $10. 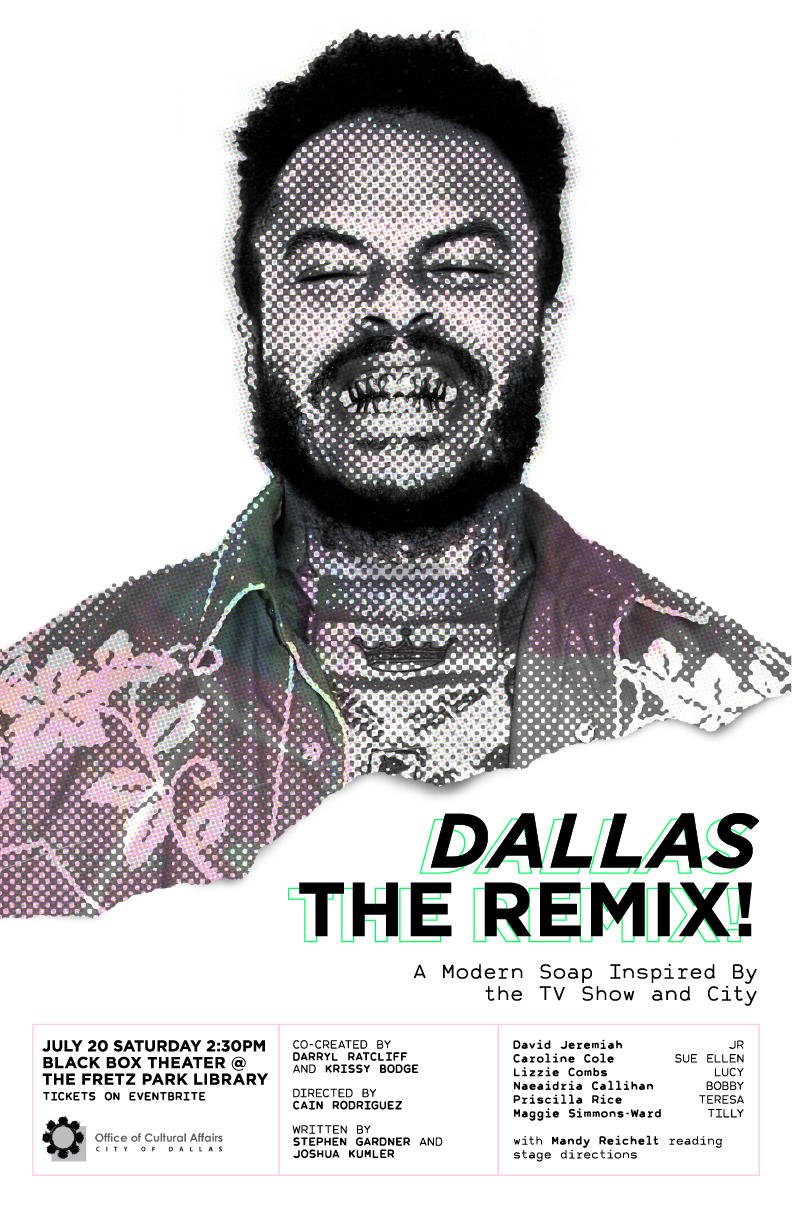