Boipelo and her squishy little calf are ready to greet their fans.
By Natalie Gempel | May 31, 2019|5:17 pm
Advertisement

The Dallas Zoo’s baby hippo officially makes its public debut tomorrow, Saturday, June 1! The Nile hippopotamus calf and 12-year-old mother Boipelo entered to the hippo habitat on Friday for the first time since its birth on May 14. The zoo allowed a day for the animals to explore the area and make themselves at home before reopening it to visitors. Zookeepers have been giving space and privacy to the pair, especially because of Boipelo’s shy demeanor, so they haven’t yet determined the sex of the calf or given it a name.

“We’re getting closer, but we cannot confirm 100 percent one way or another. We’ve been trying to let them have some time alone,” says Animal Care Supervisor Megan Lumpkin. “It’s really hard with these guys because they’re underwater most of the time, and they also have baby rolls.” 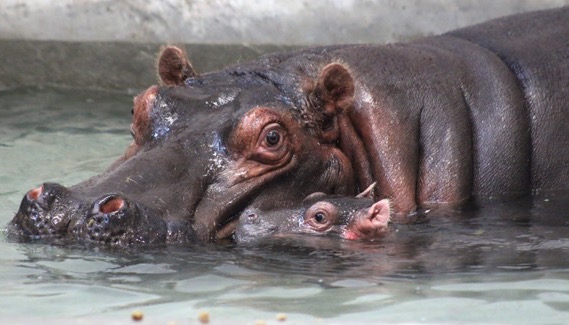 The calf was between 75 and 80 pounds at birth and has gained roughly 20 pounds in the weeks since.

“When you are looking at it, it still seems so small but it’s rounded out really nicely,” Lumpkin says.

Female hippos reach their full size–up to 3,300 pounds–at four or five years old. Males can continue growing into their twenties, weighing as much as 4,000 pounds.

The calf’s healthy birth was a triumphant moment for the Dallas Zoo following heartbreaking first years at its hippo exhibit. The $14 million addition, modeled after an African waterhole, opened in 2017 with two adult hippos, which were paired together on a breeding recommendation.

In February 2018, the female hippo gave birth to her first calf, but its lungs failed to inflate and it never took a breath. Then, in October, Boipelo’s mate, 7-year-old Adhama, died suddenly due to complications stemming from a viral infection. It was a tragically short life for an animal that typically has a life expectancy of between 40 and 50 years. Boipelo had to learn how to adjust to life on her own during the eight-month gestation period. Adhama’s legacy will live on through the adorable calf, which has been glued to its mother’s side since birth. 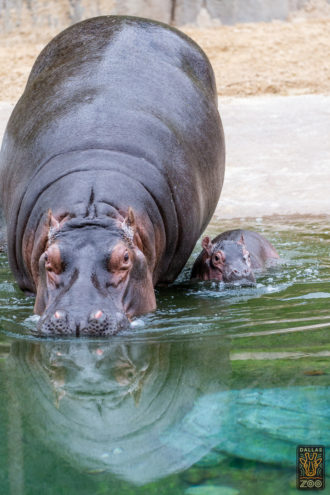 “So far, with the calf, it’s really trying to read its mother. When we attempt interactions, the calf looks at Boipelo, like ‘What do I do?’ We’ve had a great few years building a relationship with her…we were able to get her trust,” Lumpkin says. “There have been hippos I’ve worked with that make it really easy to get close…she’s not quite like that.”

The mammals naturally live in social settings, so the zoo plans to bring another male hippo to join the family later this year. The male will likely be adolescent so that Boipelo can “dominate” the group and feel safe with her calf. For now, mama and baby are doing just fine on their own, with the help of the Dallas Zoo’s loving team.

Meet The Dallas Couple Chairing the 30th Annual Zoo to Do

Robyn and Chris Chauvin say the annual fundraiser allows them to strengthen ties with their children and business community.
By Sara Rushing
Basketball

It was a game for the ages. Trust me.
By Tim Rogers
D Magazine Directories