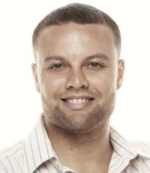 John Burr spent much of his childhood with a video camera in his hand, making amateur short films around Dallas with his friends. By the time he was a high school senior in Richardson, he had even finished a feature-length horror project.

So the local premiere of his professional feature debut, Muse, gives Burr an opportunity to come full circle, back to the city where he grew up frequenting independent movies in theaters.

The low-budget thriller will screen at 7:45 p.m. Thursday at the Angelika Film Center, coinciding with the film’s launch on Amazon Prime and other digital platforms.

The occasion likely will conjure memories of the 1990s, when Burr and his teenage collaborators churned out grassroots movies by the handful.

“They always tended to be dark horror thrillers, even when I was 12 or 13 years old. There was always some villain breaking into the house, or a kid stumbled across something and got rabies and started attacking people,” Burr said by phone from Los Angeles. “My parents sometimes wished I would do something a little more pleasant and playful, but I always liked scaring people or making them laugh by shocking them.”

After graduating from J.J. Pearce High School in 1999, Burr developed his writing voice as an undergraduate student at Dartmouth. He subsequently moved to Los Angeles to break into the business, and wound up moonlighting as a screenwriter while working various day jobs. But he didn’t have the chops to become a director, which led him to graduate school at the prestigious USC School of Cinematic Arts.

That opened up more doors, as Burr was able to work in writer’s rooms, direct a television pilot that wasn’t picked up, and land other odd jobs in the industry for his resume.

He also wrote and directed a handful of short films while polishing his feature-length script for Muse. Burr sent the screenplay to Fort Worth producer Josh Mills, a genre aficionado who helped secure financing.

The fairy-tale story follows a struggling painter (Riley Egan) who is visited in his loft by an alluring spirit (Elle Evans) who becomes his silent lover. Passion turns to obsession before he realizes her connection to the demonic Celtic legend known as leannan si.

Burr, 38, hatched the idea after attending a friend’s event hosted in the arts district of downtown Los Angeles, where a series of century-old grungy industrial buildings have been converted into artist lofts.

“I thought it was a brilliant location to host a genre film like this,” Burr said. “I figured it would be about an artist, and started tinkering with the framework for a contained story.”

The film was shot in just 15 days using mostly practical visual effects, necessitated by budget constraints. It has played 27 festivals around the world in the past 18 months. Burr attended 19 of those, including the Lone Star Film Festival in Fort Worth in November 2017.

However, the Dallas premiere helps fulfill a childhood dream for the filmmaker, who will have plenty of family and friends in attendance.

“I’m happy to show them how far I’ve come, and how many of those themes have stuck with me, for better or for worse,” he said. “It was quite a challenge. I’m delighted with what we came up with.”

John Burr and producer Josh Mills will host a Q&A after Thursday’s screening. Tickets are available here. And here’s the trailer.

The Texas Theatre Is Basically in the Criterion Collection Now