Enjoy unlimited access to all of our incredible journalism, in print and digital.
Subscribe Now
Advertisement
Theater & Dance

With Caravan, Terence Blanchard Brings Racial Healing into the Discussion at Soluna

Caravan: A Revolution on the Road brought a new level of consciousness to the programming at this year’s Soluna International Music and Arts Festival. Executed with movements and stories told in a choreography of mixed practices, this multidimensional piece lent itself to perspectives aimed at racial healing with a musician’s flare.

The band began, quick and intense, and I was thrown into sound and movement I recognized as home to me. It felt like my radical place to be there as dancers began tumbling onto the stage floor, flying into breakdance and collective movements, depicting a balance of wild control.

Enamored, I watched as these artists of different disciplines mused each other. Grammy-winning trumpeter Terence Blanchard followed the dancers’ movements, projected on a screen almost transparent with Dallas-based visual artist Andrew Scott’s curated visuals. As these mixed practices nodded to each other throughout the performance, I found myself following the neon colored lines that buzzed through the emblem of peace on the screen, made distinctive from the black power fist anchoring its place. 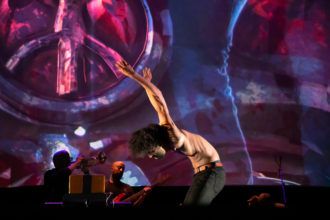 Rennie Harris’ dance company Puremovement moved in tandem with Blanchard’s band the E-Collective as Scott’s visuals played in the background, rousing the heart awake with convictions about racial tensions.

Blanchard stood nodding in time. He held an intense furrowed glance from behind his thick black frames, raising the trumpet to his lips. Pushing air into the horn, it blared with a tone much like the stifled and frustrated protestors passing the screen. The trumpet behaved like a messenger in these moments, delivering a call for discourse on the lives of people like myself, who can express they are home in the realm of black arts and culture.

This home is cherished on the same stage that the performance reveals it is threatened. As more images of civil action crowded the screen, a picket sign that read, “Fear has no place in school” was especially jarring. Layered with contemporary movements, the dancers transitioned from tap, crunk, hip-hop, and break dance.

The dancers’ story played out on stage as the screen above panned over unnerving images, like the green graduation robe of Michael Brown. Reaching the smile and expression on his face, the piece called on the audience to remember the names of black Americans killed by police. My heart skipped tremendously in these moments, and Blanchard’s trumpet seemed to cry inconsolably, like any father who had helplessly lost their child. 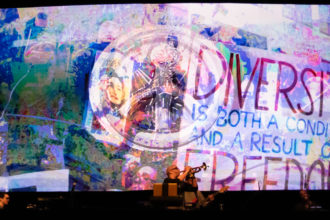 The trumpet was soothed by the dancers and band. As the performance reached more rested and slower movements, my heart slowed as I noticed the audience was moved to tears by its impact.

Contrary to its feel-good connotations, healing can be painful and uncomfortable. In its delivery, music, performance, and visual art effectively moved together for a cause larger than the sum of its parts.

Behind the Scenes of Dallas Black Dance Academy’s ‘Espresso Nutcracker’

The beloved Christmas tradition opens on December 11 at The Majestic Theatre.
By Moriah Forbes
Theater & Dance

Starting this weekend, the dance company is using new locations and the power of film to lift up its poignant message during this month of celebration and reflection.
By Eve Hill-Agnus
Coronavirus

Go inside the production of the new film that takes the dance company—and us—far beyond the stage.
By Eve Hill-Agnus
D Magazine Directories