Let’s take a moment to appreciate a musician whose writing, production, and consistency has made him one of DFW’s best hip-hop artists: Jayson Lyric. You may assume he derives his moniker from the 1994 romantic drama “Jason’s Lyric,” which starred a bevy of East Coast-bred actors doing horrific Houston accents, but you’d be mistaken. “There’s no crazy story behind it, really. I’m a fan of the first name, last name rappers,” said Jayson Lyric. “Examples, Lupe Fiasco, Kanye West, etc. With Jayson being my [legal name], I just needed a last name that complemented Jayson and really described me. Being that I pride myself on being a songwriter, Lyric made sense.”

Jayson Lyric has perfected a style of songwriting where his vocals and the instrumentals he lays on top of them work as a team. One never overpowers the other, there’s true synergy. His delivery is versatile, allowing him to go into rapid verbal assault mode when needed. Other times, he uses catchy vocal cadences, and he frequently adds in soulful harmonies. The organic nature of his music can be attributed to most of his beats being crafted via his own production team, NHouse Penthouse, or with long-time collaborators Oktober 1st and Dangerous MC’s. Collectively, they’ve created a sound that seamlessly blends elements of hardcore trap, conscious rap, R&B, and the influence of gospel music. 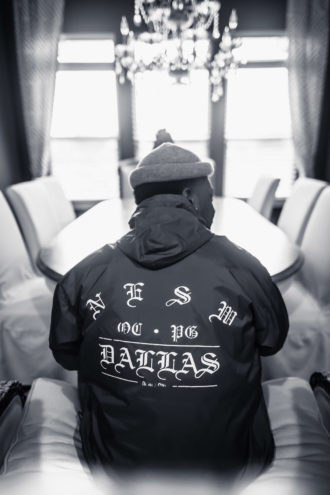 His Brick X Brick mixtape series, Volume I (2015), II (2017), and III (2018) have helped establish him as a formidable brand within the competitive talent pool of Dallas hip hop artists. In addition to that, he’s also released Lyric Show in 2016 and Billy GOAT in 2017. This year, he’ll release his 3rd full length album, Cashmere Don.

According to Lyric, creating music is part of his daily routine. “I’m a work horse,” he says. “I write daily, I record daily, and I produce somewhere in between. I can’t even start to count how many songs I have that will never see the light of day. If you only knew how my mind works. All these thoughts, ideas, and stories. I’ll never run out of things to say because I speak from the heart.”

Right now, Jayson Lyric says his sole focus is making sure Cashmere Don is successful. The release date hasn’t been confirmed, but the artist plans to continue his tradition of dropping albums on Friday the 13th. Looking at the 2019 calendar, that only leaves September and December as an option. Given the fact that he’s a Virgo, the former is most likely. “Cashmere Don, this is the one,” he says. “My only goal this year is to go ten times harder than I did last year.”

We’ve curated a playlist of eight songs by Jayson Lyric we feel best represent the scope of his artistry. It’s what we would play for a new listener in the hopes of converting them into a new fan. Enjoy.