When George Washington walks onto the stage at the beginning of Hamilton, I thought of my cousin. I would never have imagined that someone who even vaguely resembles my cousin would be playing founding father George Washington. But there Conroe Brookes was at the Music Hall at Fair Park, just as Christopher Jackson was on Broadway and Jonathan Kirkland was in Chicago.

Part of the initial brilliance of Lin-Manuel Miranda’s Hamilton is how, even when you know it is coming, there is a physical dissonance in seeing a cast of mostly black and brown people playing the founding fathers of the United States of America. For a person of color, and for me personally as a black American, there is a collapse of distance between my life experiences and the history of the country that is dizzying, uncomfortable, and exhilarating. This is only the top layer of the Matryoshka doll of a play that is Hamilton: the descendants of slaves are cast to play the roles of the slave owners, and perhaps, although we did not conceive it, there is nothing more American than that.

The musical opened on Tuesday and runs through May 5 at the Music Hall in Fair Park. It was a major get for Dallas Summer Musicals, a statement in a season that also brought The Book of Mormon to the Music Hall. Landing Hamilton represented a comeback in the fortunes of the DSM and ultimately may have provided some incentive for collaboration between the city’s other purveyor of Broadway plays in Dallas —the AT&T Performing Arts Center.

It is imperative to see Hamilton in person, as the cast recording does not prepare you for how beautiful and impactful the choreography is. The actors are in constant movement, incorporating elements that reference both hip hop and modern dance. They shimmer and they slide. They twerk and they milly rock. They swing, they ballroom, they jazz, they salsa—all of it comes together in a modern ballet.

But the brilliance of Hamilton is how you barely notice any of this. That the story, the technical artistry, the sheer unbelievable dexterity of language, and mastery of form thoroughly draws in the viewer and propels them through the musical. Miranda’s stylistic choices feel inevitable. Of course Thomas Jefferson could be played by a black man and Hamilton by a brown one. Of course hip hop and R&B rhythms, language, cadences, movements, and references could infuse a Broadway musical about the founding of America. All of that falls away under the humanity of the bigger themes of Hamilton, which, especially, for the two protagonists of Alexander Hamilton (played here by Joseph Morales) and Aaron Burr (Nik Walker) center around what one is willing to risk in pursuit of power and legacy. 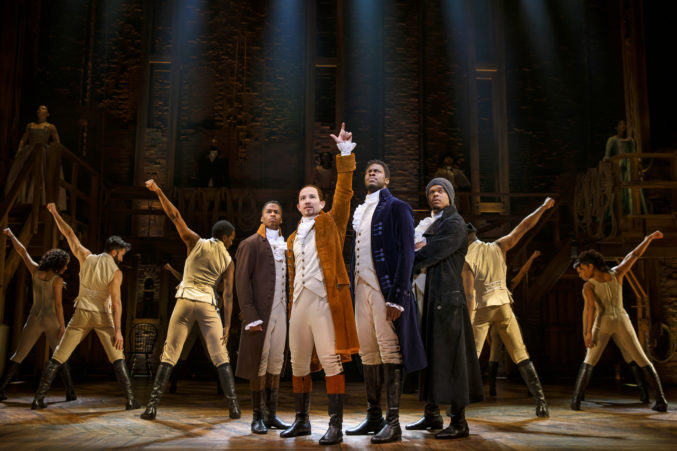 After repeated viewings of Hamilton and dozens of listens to the cast recording, Burr is the anti-hero I find myself caring more about. Hamilton is often told through the perspective of Burr, and Walker brings a charming yet restless energy to his portrayal. He is a man who is trying to play by the rules of the system yet can often barely contain his own ambition and paranoia that the system might fail him. It lurks in his hand gestures, in his narration, in how Walker slinks around the stage. He is a man who both wants and needs power as personal validation. Burr and Hamilton’s initial friendship is built on this mutual ambition. They both see the Revolutionary War as an opportunity to catapult them into being great men. Hamilton is the “immigrant, orphan, son of a whore and Scotsman” who, in contrast to Burr’s pedigreed status, is willing to do whatever it takes for him to advance. Burr and Hamilton’s friendship devolves because of the tension between Burr’s adherence to playing the long game and Hamilton knowing he does not have that luxury.

Hamilton is an ensemble play and one of the real joys of this Dallas production is how great the entire cast is. Fergie L. Philippe is a revelation as both Hercules Mulligan and James Madison, popping off the stage in every scene he is in. Kyle Scatliffe brings an African-French accent to his roles as the Marquis de Lafayette, which adds another layer of colonialism and nuance to the character.

Scatliffe’s Jefferson is swaggering, swinging between light heartedness and cold pragmatism. Nyla Sostre, who plays the oft-forgotten Peggy Schuyler and Hamilton’s mistress Maria Reynolds, made the most of every scene she was in and is clearly talented enough for a larger role. Emily Jenda was stellar in her portrayal of Eliza Hamilton, one of the surprises of the night. Jenda, is normally the understudy for the role, but she put on full display her musical talent, especially on her solo song “Burn.” If another tour of Hamilton is launched she seems ready to play the role full time.

It almost goes without saying, but one of the things that makes Hamilton so great is its music. Angelica Schuyler’s (Ta’Rea Cambell) “Satisfied” is a musical and lyrical triumph for the play. After the viewer watches Eliza and Hamilton meet at a party, fall in love, and get married during the preceding song, “Helpless,” we get to see Eliza’s older sister Angelica’s point of view in “Satisfied.” In one show-stopping number, which finds Cambell both rapping and singing, we get a fleshed out version of who Angelica is, what motivates her, and the sacrifice she makes so her younger sister can find happiness. The large ensemble numbers, whether it be “My Shot,” “The Schuyler Sisters,” “York Town,” or “Cabinet Battle #1 and #2,” are also excellent and bring jolts of adrenaline that help the play maintain its superb pace.

Seeing the play in Dallas without the original cast only affirms how brilliant the musical itself is. This production of Hamilton will be a revelation for anyone who views it no matter whether they saw the original cast in New York, the cast in Chicago, listened to the original cast recording, or had no familiarity with the play before seeing it. So, even if you have to, in the words of Alexander Hamilton, “beg, borrow, or barter”, do yourself a favor and see this masterpiece while plays for the next two months in Dallas.

And how do you get a ticket to the play? First, contrary to the rumor mill, Hamilton is not sold out. Your best bet is a single ticket option through Dallas Summer Musicals via Ticketmaster, which range from $140 for a seat in the balcony to $200 for a seat in the orchestra. Aim for May; the selection is much broader. There is also the Hamilton lottery which you can enter daily online and awards 40 tickets to each performance for only $10—which over the run of the show will allot 1,400 tickets.