The Dallas Arts District is an oddball of a neighborhood. As much as it’s a vital part of the city’s cultural fabric, holding many of its most richly resourced arts venues in a three-block radius, it’s often rather lifeless during the days and on nights when there are few events. So, for the next couple weeks, the neighborhood is playing a game of balance. A new installation, titled IMPULSE, is giving people a reason to stop by and hang out; the work is a collection of 12 interactive, light-up, musical seesaws. It’s like a playground for the Instagram generation.

The installation was originally created by Toronto-based firm Lateral Office for the 6th annual Luminotherapie in Montreal, a light-based art festival comparable to Dallas’ Aurora. It was inspired by the ubiquitous album art of Joy Division’s Unknown Pleasures–you know, that black background with white waves that’s been on a million t-shirts–as well as the music of Steve Reich. It was originally a group of thirty seesaws, meant to visualize sound waves. When viewers interact with them, they emit light and musical sequences, acting together as an instrument. 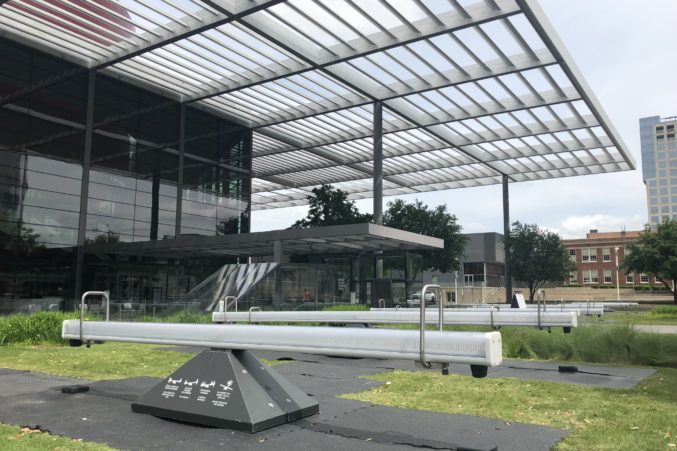 Interestingly enough, the neighborhood that IMPULSE was designed for in Montreal seems to have a lot in common with the Dallas Arts District. The Quartier de Spectacles is home to the city’s main theaters, performance venues, and museums, yet Lateral Office wrote that “there have also been issues with attracting people to the arts district when events were not taking place.” Sounds familiar!

The installation was a hit during its 2015 debut in Canada, so it’ll be interesting to see if it has the same draw in Dallas this spring. I walked over to Sammons Park (next to the Winspear) yesterday to check it out, and most of the seesaws were occupied by young art enthusiasts. When I went back today to take the above photo, it was a ghost town.

The public art will stay in Sammons Park (in partnership with AT&T Performing Arts Center) until April 22, and will reopen in Downtown’s Main Street Garden on April 23, where it will be on view until May 6. I’d recommend going at night to get the full effect of the sound and light show.