What exactly does it mean to launch a rosé at a music festival? This was my own personal, burning question as my coworker Catherine Downes and I headed to a First Sip event at The Joule on Thursday evening. The night was a celebration for KAABOO, a music festival with a fairly stacked lineup that will be held in Texas for the first time at AT&T Stadium this May, and Hampton Water, the rosé company founded by a real up-and-comer, Jon Bon Jovi, and his son, Jesse Bongiovi.

I had heard of Hampton Water from a particularly delightful installment of Cosmopolitan’s Adam Rippon Riffs On series, where the Olympic skater tastes five celebrity-backed rosés, including Christy Brinkley’s Bellissima, Brad and Angie’s Miraval, and Hampton Water. To sum it up, Rippon cared not for Drew Barrymore’s wine, but Hampton Water came out on top.

So, my hopes were high as we stepped off the elevator and onto The Joule’s mercifully tented and heated rooftop pool deck. We were immediately given a glass of Hampton Water and asked if we’d like to take a photo of with Charlotte Jones Anderson (the representative for KAABOO) and Bon Jovi. Yes, yes of course, we said. And we did.

I tried to ask Bon Jovi the meaning of launching a rosé at a music festival, but there was no time. There were far more important guests such as Tim Headington and Nancy Rogers and Kimberly Whitman, who needed to be photo opp’d as well. It did give me time to actually drink that glass of rosé, though. Rippon was right, it was “delish.”

Next, we were whisked off to meet with Bongiovi, whom my Catholic mother made sure to inform me was a recent Notre Dame grad and football player. He’s also incredibly charming, sociable, and has been putting in some serious work to bring Hampton Water, which launched only about a year ago, to new markets, including Dallas. (The rosé will be available at Central Market, Uchi, Nick & Sam’s, and Pogo’s, to name just a few spots, soon.) When asked why the name Bon Jovi was entirely absent from the rosé’s label, Bongiovi said that they wanted the product to be the focus—if you know the story behind it, that’s somewhat of an added bonus.

Before we wrapped up, I asked him of he could explain what it means and looks like to launch a rosé at a music festival. He didn’t deliver a clear-cut answer, but the three of us cheersed, he continued to charm, and the rosé continued to be really very good, so I didn’t care.

We turned around to admire someone’s shiny boots, and recognized that girl from The Bachelor. The one who threw a birthday party for her breast implants.

Answerless and empty-glassed, we headed to the pool bar to grab another round of Hampton Water. We shifted our focus across the room, where we saw a man so towering, we assumed he had positioned himself on some sort of box or structure. It was Dirk, of course.

Catherine: I met him once at a sandwich event.

Caitlin: There’s so much talk of “When’s Dirk gonna retire?” and, more ominously, “Go see Dirk before it’s too late,” you forget how young he is. He’s so fresh-faced in real life!

To our left, a group of bloggers was posing for a photo. (#KABOOTEXAS #EnjoyedEverywhere). We were then approached by Charlotte Jones Anderson, a vision sporting white boots and a glittery number only someone as lithe and lovely as Anderson could pull off. We talked KAABOO, which Catherine and I were genuinely intrigued by. The three-day festival, which has previously been held in Del Mar and the Cayman Islands, will be headlined by Sting, The Killers, Kid Rock, and Lynyrd Skynyrd, and will be, in true Dallas fashion, quite luxurious (particularly by festival standards). In addition to music, there will be culinary and craft beer offerings, cabana setups, visual art installations, six stages, and a Las Vegas-style pool club.

Anderson was so knowledgeable about the goings-on of KAABOO, I assumed I’d finally get my answer. “So, what exactly does it mean to launch a wine at a music festival?” I asked. Catherine confirmed later that we didn’t really get an answer, but we had such a nice time talking to Anderson, we didn’t care.

The vision left us, and Catherine and I quickly began searching online for tickets, which start at $159 for a single-day pass (I just bought tickets to Coachella, so this seems aggressively affordable) and can go up to $20,000 for the three-day “Ultimate Hang” option, which was slightly out of our budget. We washed down our sorrows with more rosé.

Suddenly, the crowd began to shift stage-wards for the acoustic set by Bon Jovi, joined only by a guitar player and a violinist. Catherine and I debated whether we should wade through some very bushy plants to get a better view but opted out. Later, we’d see another guest plow right through them. “I’ve been doing this all night,” she said. Lesson learned. 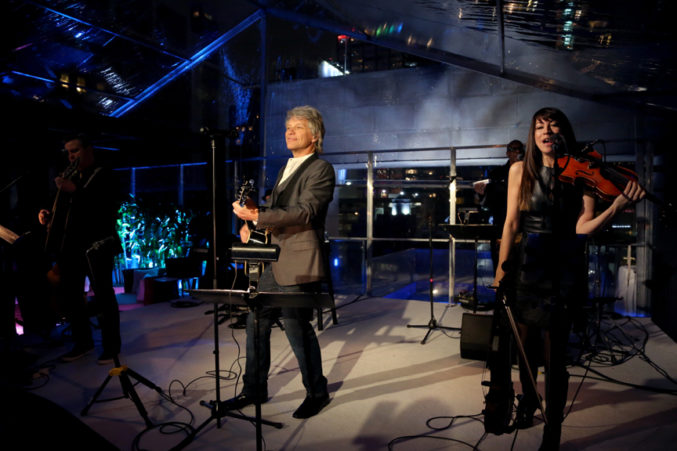 Bon Jovi was as dreamy and impressive as his silver hair, and deftly worked his way through crowd-pleasing hits like “Livin’ On A Prayer” and a slowed down, sultry version of “It’s My Life,” as well as covers, including a rendition of “Here Comes the Sun” that I recorded the entirety of for my mother. He closed his set with “American Pie,” and we all headed home. (Actually, Catherine went to Midnight Rambler. Catherine is much cooler than me.)

I’d like to think Bon Jovi could solve the mystery of how exactly one launches a rosé at a music festival, but, of course, that’s beside the point. You’ll obviously be able to drink Hampton Water at KAABOO. And in our experience of being a few glasses deep while watching a musical legend perform, it’s a highly enjoyable combo.