On Saturday, a new exhibition by Lubbock-based artist Shannon Cannings opens at Cris Worley Fine Arts. The show, aptly named Triggered, is fun and vibrant at the surface level; a collection of seven oil paintings and one colored pencil drawing, all depicting shiny toy guns.

It’s a subject that’s dominated the artist’s work for the past decade, though Triggered only goes back to 2018. For a color-obsessed realist with an eye for kitsch, the little playthings have become a perfect vehicle to explore consumer culture and Americana without projecting any of the bleakness that can accompany those things.

Ahead of the opening this weekend, we caught up with Cannings to talk about the most prevalent inspirations behind her work.

What interests you about guns, and toy guns in particular?

When I first moved from Syracuse, New York to Lubbock, Texas, the first thing that struck me was the crazy difference in landscape. In New York, roads look like spaghetti thrown on the hills. Lubbock has a grid on a pancake. I was interested in the plastic things we put in our square, fence-lined backyards for comfort; Plastic chairs, flamingos, blow-up pools, and beach balls. It was all nostalgic, summery, playful stuff. I loved the smell of the vinyl, the translucence, the color, graphics, and packaging. So, I had a shopping season and a few aisles at big box stores to get the next year’s subjects.

On one shopping trip, I found a pack of squirt guns. I had come from a household with no guns, even toy ones. And now I was a new mom holding this taboo package of rainbow assorted weapons for kids. I decided I need to buy them and figure out what I felt.

I had no idea when I painted the first couple of paintings that they would lead to such an important, loaded (pun intended) subject. This had the same visual appeal as the plastic pool ephemera. But they had a connection to American gun culture that made them complicated. That sentence alone may divide your audience, but let me explain. The first thing a kid does when you give them a loaded squirt gun is point it at a friend and try to shoot them in the face. They are looking for a reaction, a scream and giggle, a funny face from the friend. Pretty soon, the friend figures out the range of the water stream and stays outside of that circle. The shooter gets hot and tired, and puts the gun in their mouth to suck out the water. Pointing a real gun at someone else and at yourself are the first two things we teach people not to do gun safety classes, but they are encouraged as cute fun for kids. 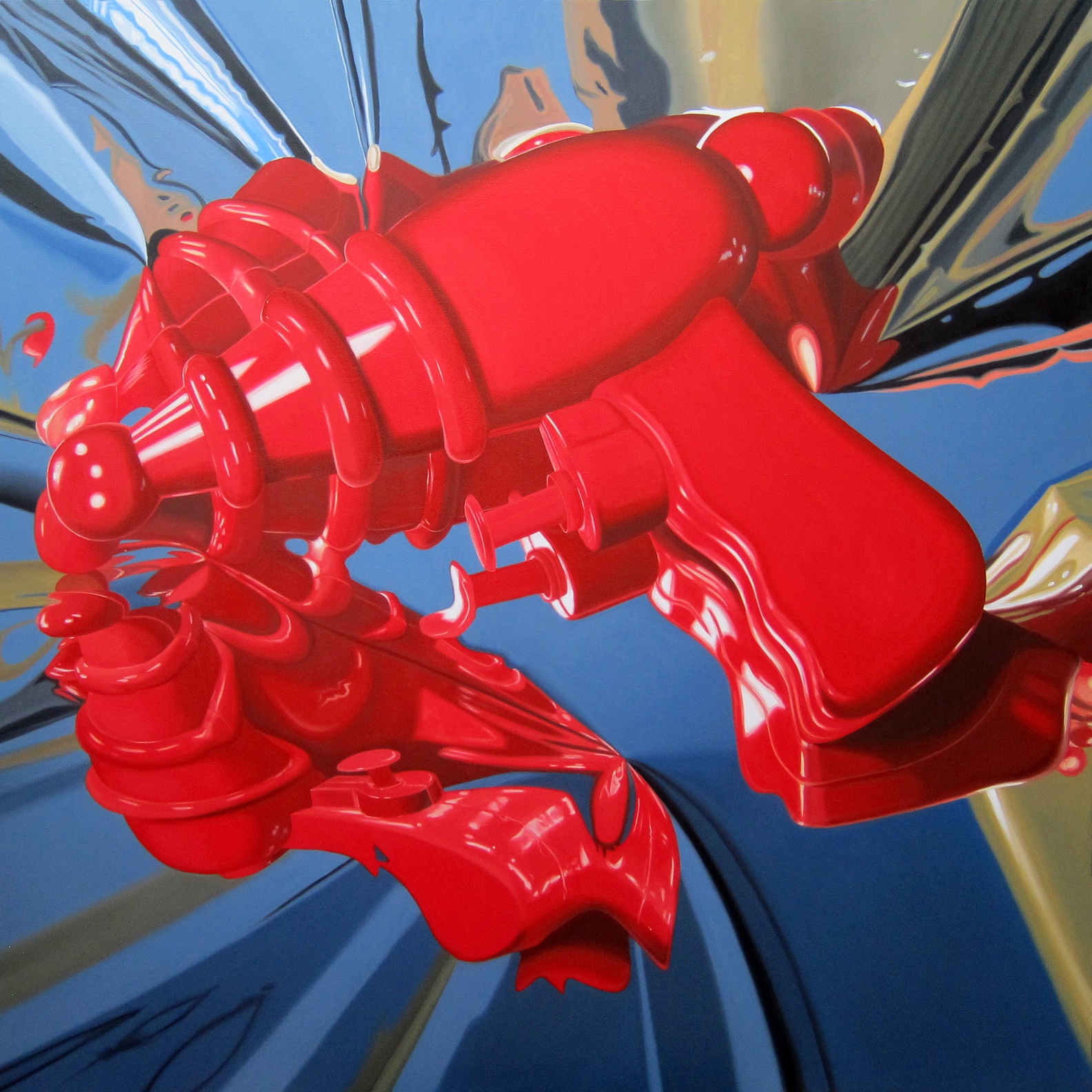 What do you want to say about gun culture in America?

What I have discovered in the past few years is that I am not as anti-gun as I thought I once was. But, I have become a lot more anti-gun culture. These objects are great tools for certain jobs. Hunters, ranchers, and police all use them to perform a job or service. Hopefully, they use them with care. We all know well, that this is not always the case, so there is a need for regulation and a lot more education. But without the noise of the media, politicians, lobbyists, and marketers, I think average people probably agree more than we think they do about gun culture and control. No one supports the mass shooters or domestic abusers. Everyone sees them as the “other.” They are not the other. They are us. We need to look at ourselves and figure out how we keep making them. What is broken and how can we fix it?

I have never felt that my job as an artist was to tell people how to think. And I don’t think any viewer wants to feel manipulated. I do want to offer these images to be questioned. I love a wide audience bringing different experiences to the work. I want people to be pulled in by the formal beauty of surface and color and light like I do when I am painting them. And then I want them to ask themselves to question their ideas about guns and their role in our society. 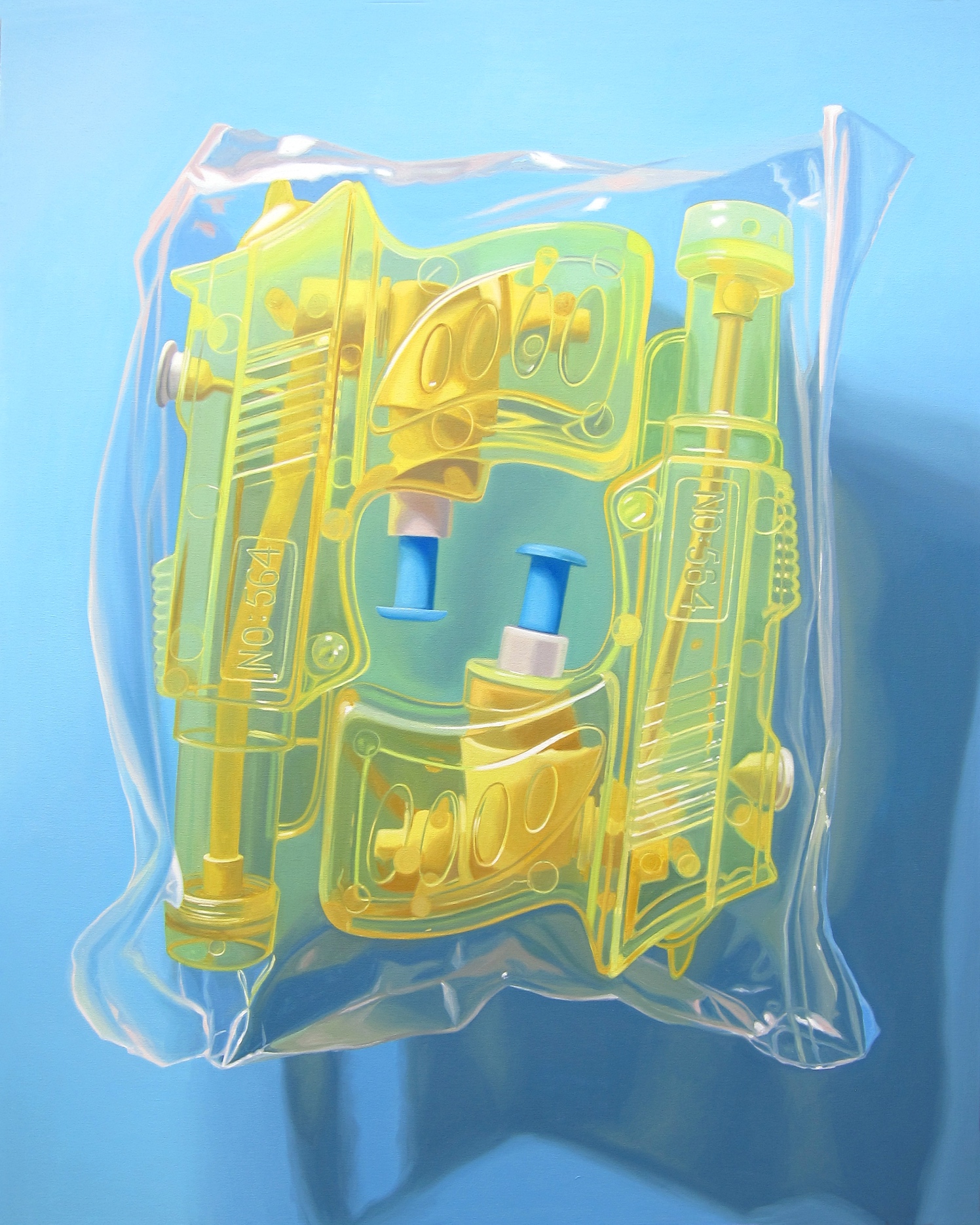 What role does consumer culture play in your work?

We are attracted to packaging and type and product design because of the way they make us feel. These objects bring us excitement, or happiness, or power, or nostalgia. They allow us to be someone cooler than ourselves. I think we have to come to terms with the positive and negative effects of this.

Visually, what inspires you?

Formally, I am a colorist. I love figuring out how to make colors pop or recede. I love reflected light and translucence, distorted mirrored surfaces, sharp and soft edges, creating illusion.