Inside the walls of Guyer High School in Denton, Elizabeth Heyns, known to her family and friends as Ellie, is much like her 17-year-old peers. She hangs out with friends. She likes to watch shows and movies on Netflix and scroll through YouTube. But not many other teens follow YouTubers like Mykie of Glam & Gore, or experiment with fake blood recipes after school.

Ellie is the first special effects makeup artist to be recognized by the Texas Commission on the Arts and Texas Cultural Trust as one 15 Young Masters from across the state. The prestigious award is given to students in 8th to 11th grade who show talent in music, visual arts, dancing, theater, film, and literary arts.

Ellie applied for the program at the urging of her mother, Michelle Heyns.

For parents whose children are talented singers or dancers, the potential is easy to see —but how do you find out your daughter has a talent for special effects makeup? 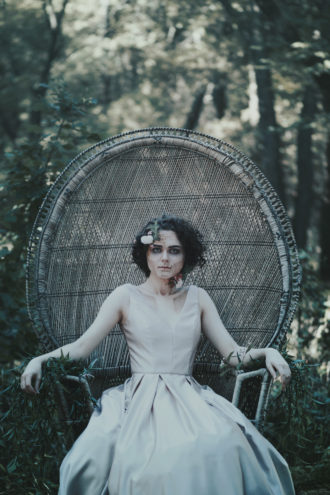 “I think I noticed when she just started doing it in her room. I don’t think there was a moment where she came up to me and said, ‘Hey I’m interested in this.’ She just started messing around with it,” says her father, Garrett Heyns, an artist in his own right.  “She’s always been artistic. She used to draw anime and fashion, she had a lot of different interests as far as art goes. It has always been there. But she started coming home from school and working on this stuff.”

And then there was the blood.

“She would come into the kitchen and be like ‘I’m making fake blood,’ and I was like ‘Wait. What are you doing!’” says Michelle, laughing.

Her parents recognized the genius and passion of Ellie’s work, but they weren’t entirely sure an organization like Texas Commission on the Arts would.

“I actually found out about Young Masters because our son is in the orchestra program at school and they sent a flier home about it. I thought, Ellie’s really passionate about her art and I think it’s worth a shot, so I brought it up to her,” says Michelle.

“I didn’t want to apply initially. I didn’t think I would really qualify for it,” she says.

For the panel of judges at Texas Commission on the Arts, it was a no-brainer.

“Elizabeth’s talent was so outstanding that she actually applied under the visual arts category, and so it was a panel of visual artist experts who saw her work and recognized the immense talent she has,” says Gary Gibbs, Executive Director of Texas Commission on the Arts. 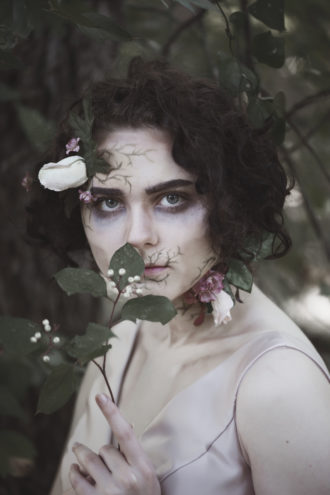 The Young Masters designation is intended to help artists like Ellie to pursue their craft at a higher level. Each Young Master is granted $5,000. The award is renewable for another $5,000 the following year.

Ellie spent part of her summer at the Vancouver Film Institute for an intensive study. More accustomed to tooling around her house experimenting with latex paint, spirit gum, and scar wax, the experience gave her an opportunity to work with experts in the field. It wasn’t just the technical skills that moved her, it was also the career trajectory discussions.

The field is competitive, says Jared Janas, a wig and makeup designer for shows like Les Miserables and Dream Girls at the Dallas Theater Center, as well as productions all over the world.

Janas got his start apprenticing. Unlike Heyns, he was about to graduate with an undergraduate degree in mathematics when he discovered he wanted to design the looks that bring the characters to life on stage or screen.

“I called my mother and said, ‘I think I’ve made a horrible mistake,’” he says of his math degree. His exposure to the carefully coordinated collaborative chaos that is theater didn’t happen until he was months shy of graduating. He believes Ellie’s early introduction to the field opens up many avenues for her in the future if this is something she chooses to pursue.

“Vancouver Film School is a fabulous place,” he says of Ellie’s Summer Intensive study. “There are also technical theater programs at universities, certifications and of course apprenticeships,” he says.

But in the end, he says success comes out of desire: “You have to want it so badly that not doing it is not an option.”

Options are what Ellie has the most of right now. Next year, she plans to use her award to complete more intensives as she figures out her path after high school. Like her creations, this Young Master is shaping her future with imagination beyond her years.