Erika Jayne is a member of the Real Housewives of Beverly Hills franchise, and happens to be one of my Top 5 Housewives of All Time. Partly because she’s not a housewife. And partly because she hangs out with fancy ladies by day and struts on stage in red, glittery, make-Dorothy-from-the-Wizard-of-Oz-wanna-return-her-ruby-slippers, thigh-high boots by night.

When I found out that Erika Jayne would be performing in Dallas on the same night as Taylor Swift (a musical artist you might know from such songs as every pop hit on the radio since recent forever), I knew I had to see both shows.

If you know Erika Jayne’s NSFW style of music, you wouldn’t guess that she and Taylor Swift have similar fan bases. I would, though, because I know a lot of moms. Moms scream-sing Taylor Swift with their kids in the morning carpool line, and watch Bravo’s Real Housewives of Beverly Hills while they chug cans of wine at night.

Erika played at The Granada on Friday, and Taylor had two shows, back-to-back nights that filled the AT&T Stadium. So, numbers-wise, these concerts were a bit different. But pants-wise, they were exactly the same: neither performer donned a pair of pants the entire show. Pants are officially OUT, y’all. #nopants

It doesn’t matter if moms like or don’t like Taylor Swift – we know all the words to that ish. Because it’s everywhere, always. Isn’t it. Isn’t it.

How many ducks do I give?*

How many ducks do I give?

Taylor could use a friend like Erika in her life. Or her squad, or whatever she calls it. Just knowing Taylor could call Erika when she’s feeling down, and Taylor would be pouring her sweet, little heart out, “I wanna be his end game. I wanna be his first string. I wanna be his A-Team,” and Erika would be like, (licks lollipop) “I like the cars that go boom” (humps nearby chair a little).

Fan fashion is a big part of these concerts. At Erika Jayne’s show at The Granada, I saw a sea of thigh-high boots, sequins, pink leather jackets paired with crazy-long blonde extensions, white Sambas paired with fancy athleisurewear, and a group of folks in SeeYouNextTuesday* shirts (of course, referencing her golden necklace worn on RHOBH).

At Taylor Swift’s concert, again, glitter and thigh-high boots played a major role. I even saw a pair on a seven-year-old in the women’s restroom. (I’m not saying she has terrible parents, but I am saying that we live in a world where velvet thigh-highs are made in child sizes. What a time to be alive.) 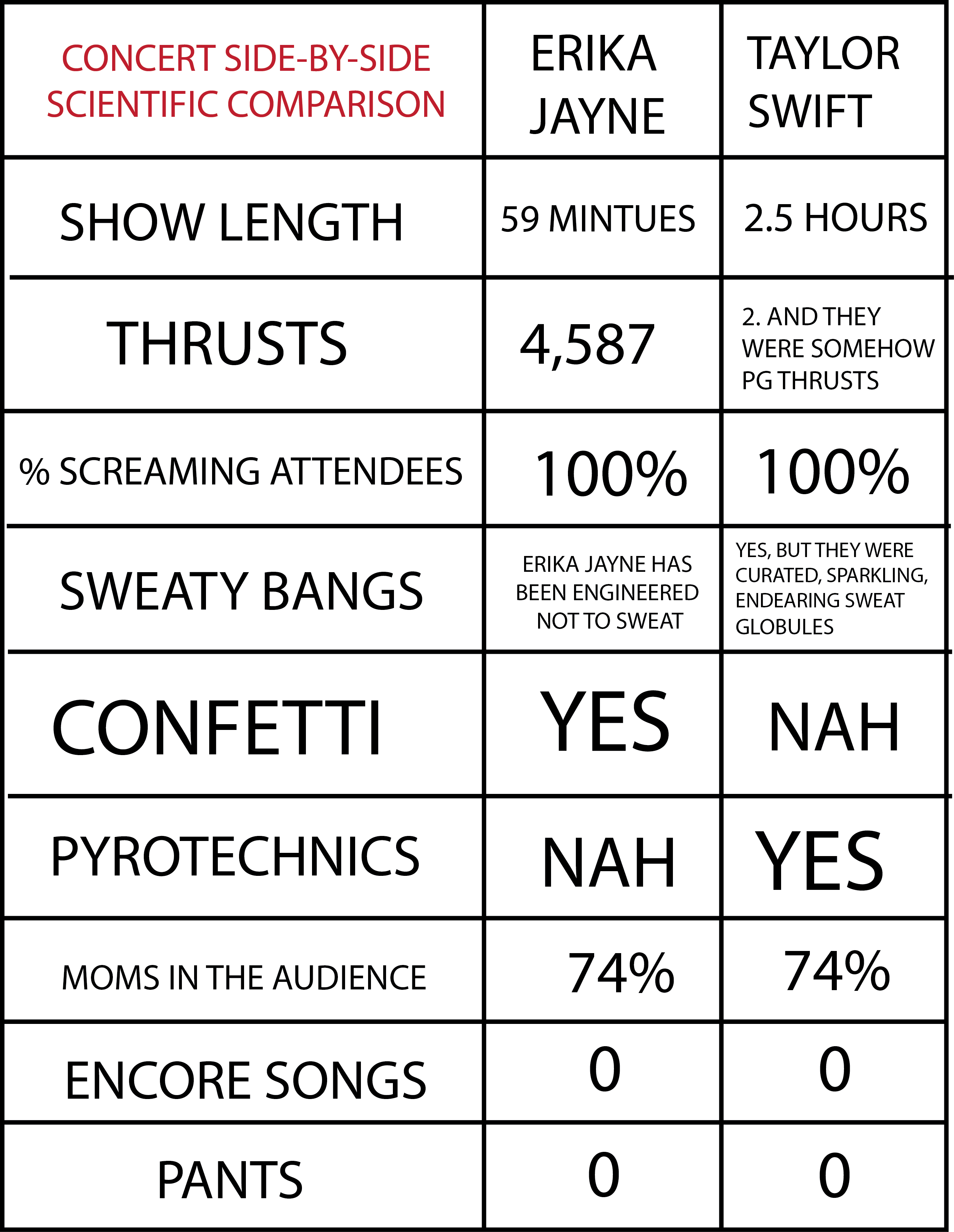 Erika Jayne sang “XXpen$ive” and I paid $40 to be there. Taylor Swift cost me $170 — but I got a free glow bracelet that lit up in time with the show. So that’s worth it. Some moms expressed concern that the bracelets had GPS in them and were controlling our minds. I thought they were crazy, but my glow bracelet is still blinking three days later, I have a sudden, unquenchable desire for smirks, and I keep playing the Red album on a loop, so maybe they were right.

Taylor mentioned that she was the first person to ever have back-to-back Friday and Saturday night shows at Jerry World. When you spend a minute thinking about the dollars Taylor Swift was bringing in per person in that Jerry World arena, you start to believe that she might actually be as rich as Erika Jayne.

As a venue, AT&T Stadium takes whatever you put into it and magnifies it until it’s almost unrecognizable. Taylor Swift became insane amounts of popcorn, cocktails imagined by a drunk teenager, and an overabundance of Tinkerbell perfume. Every moment I was in that venue was meticulously choreographed and curated Taylor Swift Times Fireworks. When she wasn’t on stage, they were playing her songs through the speakers cranked all the way to eleven. There was an intermission halfway through the show, during which they played videos of fans watching her videos.

The place was packed all the way to a ceiling I couldn’t even see. I’m not sure how it was physically possible for people to be seated up there, but they were. And they were screaming their faces off for three hours straight. Honestly, I tried to figure out if Taylor was singing any of her songs live and it was almost impossible to know because the crowd was shouting every single word. It would likely be a waste of energy for her to sing the jump-around-y songs live.

About two hours into the show, she did turn down the pyrotechnics and quiet things down for a moment or two to sing some older stuff (which was definitely live) with her guitar. During this time, the 9-year-old in front of me fell asleep and stayed asleep for the remainder of the show. This is why we can’t have nice things.

Erika Jayne played every song she has ever written, paused the show halfway through for a costume change, and was in and out in a maximum of 59 minutes of stage time, ending in a confetti blast and screaming fans. No encore. Not even a whisper of the idea of an encore. Lights were up so fast in The Granada, it was as if I had just turned the TV off on the show. And every face in the crowd was grinning ear to ear. “I have time to get home and watch some Netflix!” your mom said.

Pretty much the same thing happened at Jerry World. When Taylor said thanks from the stage and left it, the lights went up and people began clearing out immediately. No encore. I had expected some cry-chanting “Tay-lor! Tay-lor! Tay-lor!” and one or two encores at least. But it was clearly way past bedtime.

Attendees for both shows walked out glowing and amped up, feeling like every dollar spent on this experience had been worth it. Unless they were hoping to see pants. 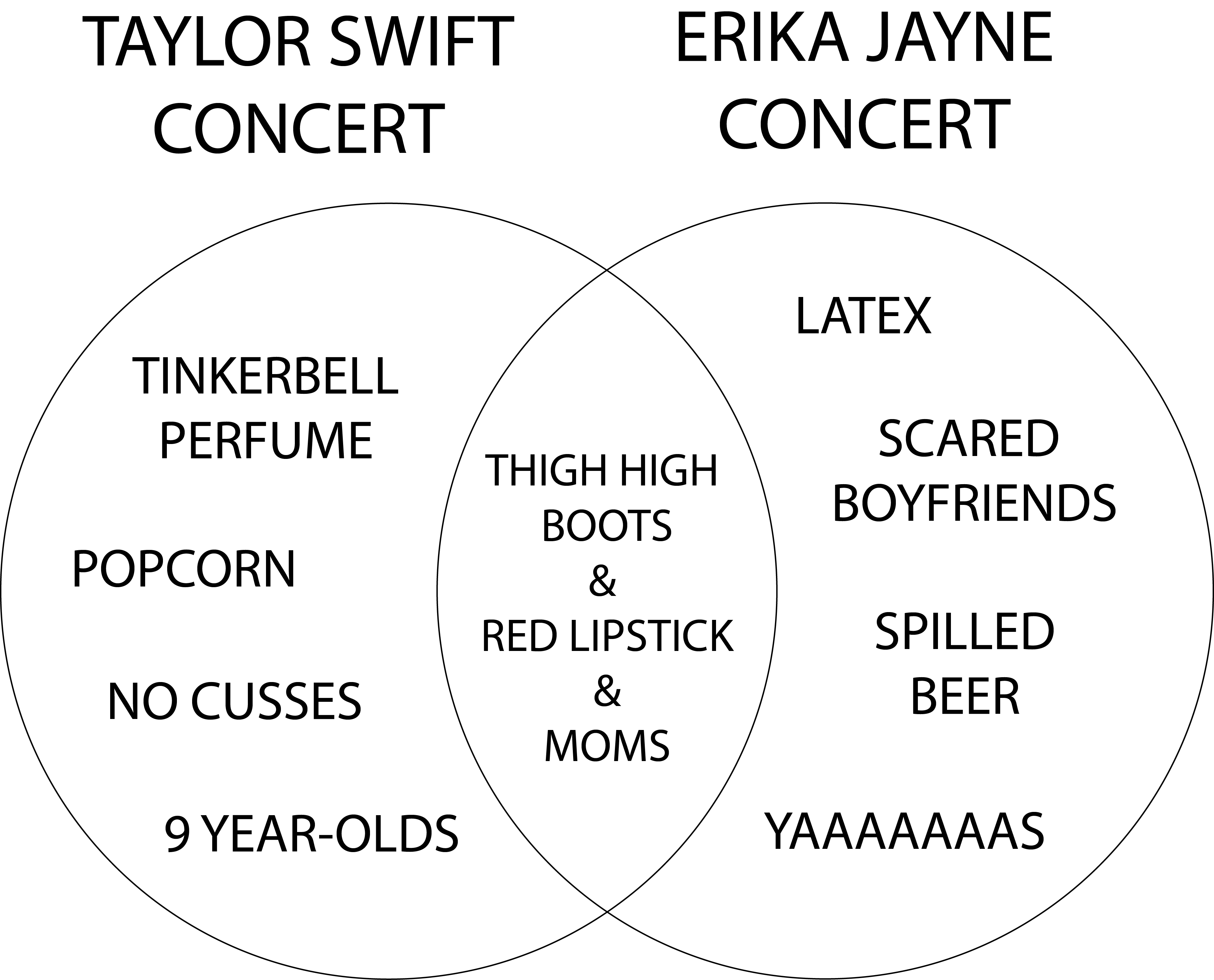 *the actual word on the shirt rhymes with “bunty,” a term Erika embraces with fervor.