It took Drake a decade, but he finally made an arena seem intimate. He’s spent years trying tricks to break the barrier between his isolating superstardom and the personal connection he wants to share with his fans. He’s had stages that include a catwalk-like extension into the audience. He’s hooked himself to a wire and sailed over the crowd. Most commonly, he turns on the house lights and calls out people he sees in the bleachers.

But it turns out, all he needed to do was plunk the stage in the middle of the arena. That was the setup for Wednesday’s Aubrey and the Three Migos tour, which returns this evening to the American Airlines Center for a second night. Think of this as functional commerce: it allowed him to sell seats to the entire arena instead of blocking off the sections behind where the stage was set up. He ping-ponged corner to corner, edge-to-edge, pitting one half of the stadium against the other in a battle of who could scream the loudest. For two hours, the American Airlines Center became America’s largest club.

That rectangular stage—think slightly shrunken basketball court—is surrounded on all sides by a mass of fans who crammed into the space between the security blockade and the pink tape on the floor. Drake locked eyes frequently with these folks, standing so close to the edge that the sweat on his face is visible. For the rest of the audience—the vast majority of the audience—above the stage hangs a rectangular wall of videoboards, bringing Drake’s face to their level. Those in the stands traded proximity for projections; the stage is not just a stage, but an enormous projection screen. Expect everything from waves of sand to mermaids and lit-up boxes that follow Drake around. 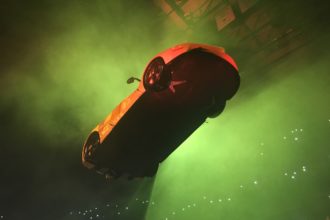 There is no place to hide on that giant rectangle, and, while there a few distractions—little bursts of choreographed fireworks, a yellow Ferrari that sails over the crowd during Lil Baby’s hook on “Yes, Indeed”—the night doesn’t work if the performer takes a breather or the setlist lags. Migos’ 40 minute opening set didn’t have the same energy as the headliner, but impressed in how perfectly the trio nailed their intricate songs. They each wore skydiving vests attached to bodysuits—camo and royal blue and black—and slowly stalked the stage, moving with the immediacy of clock hands. Their ad-libs—scccrrrch, hey!, mmmm, oooo—were done live and delivered precisely, never missed and with no early stops and late starts. They were focused and locked in, and while they weren’t bounding with energy, hearing Quavo’s singing alongside Takeoff’s percussive flow and Offset’s fury kept most of the arena’s eyes on the stage.

After nearly an hour break, see-through curtains descend and there’s Drake, bounding back and forth, a shadow come to life. The first half of his set is lively and punchy, beginning with “Started From the Bottom,” going through “Trophies,” “Know Yourself,” “Gyalchester,” and a lightning-fast, 12-minute suite of his early singles. When you looked up, 45 minutes had passed and the Migos were back, this time donning full psychedelic NASCAR-branded body suits. “Versace” was a showcase for Drake’s nimble verse and little else, with the Migos only getting to perform the hook of the song that broke them. They did “Walk It Talk It” together and Drake slinks off for a few minutes and gives Migos the floor again as they perform “Narcos.”

The second half of Drake’s set—B S I D E, the screens read, just like the second half of Scorpion—slows the pace a bit, making room for a cover of Michael Jackson’s “Rock With You.” From here on: dancers, a laser-made basketball court, a $25,000 half-court shot, and Drake, there in the center of the room, a superstar within reach.

A few years ago, for his tour in support of Saint Pablo, Kanye West performed from a stage that hovered over fans who were packed into the middle of the arena. He bathed the AAC in warm light, stacked speakers in the corners of the floor to pulverize those in the pit, and toyed with the lighting on the floor so that the GA’ers were turned into visual art elements for the folks in the nosebleeds. It provided two wholly separate experiences, you were either part of the show or you were watching it unfold.

Drake and Migos took that concept, but brought everyone in. This is the guy who, you are aware, might be dating an 18-year-old. The guy who perches at the Bomb Factory on a Tuesday night watching Kali Uchis. The guy who takes photos at the Joule pool afterhours. The guy whose songs have been a part of your life for 10 years, who is famous because of the quality of said songs, yes, but because he’s also done a good job at making you think you know him. “This is not just about me performing tonight, this is about us performing tonight,” Drake says, just like he probably does every night. After all, at the end of the evening, each of the 15,000 audience members will wind up covered with the same confetti that’s falling on him.