The Arlington tour stop of Beyoncé and Jay-Z’s On the Run II on Tuesday night was a celebration of black life and excellence for a community that needed to hear it and see it. Fans dressed to slay and not to play, pouring into AT&T Stadium dressed in everything from Rainbow to Yves Saint Laurent.

But LaDrina Jones, a Dallas-based paralegal, made her own outfit. You see this sort of thing a lot at Beyoncé shows, but Jones’ carried a specific message. She wore a cropped red pullover hoodie with a custom-printed image of Botham Shem Jean, the 26-year-old who was shot dead inside his apartment last week by a Dallas police officer. Capitalized white block lettering above and below his photo read, “Get your hands up high like a false arrest,” lyrics from The Carters’ collaborative justice anthem “BLACK EFFECT.”

“It was on my mind, it was on my heart and my spirit,” she said of Jean’s death. “I couldn’t come here tonight without acknowledging that this is happening in some way.”

But she still was able to smile. After all, The Carters were in town. Their three-hour performance was electrifying and cathartic, so much so that there was little of the usual hemming and hawing over ticket prices. Bey and Jay made sure you got your money’s worth. 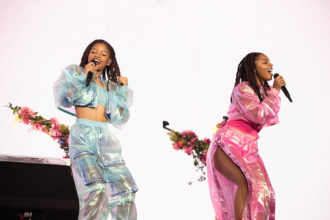 ARLINGTON – SEPTEMBER 11: Chloe x Halle perform on the ‘On The Run II’ tour at AT&T Stadium on September 11, 2018 in Arlington, Texas. (Photo by Raven Varona/Parkwood/PictureGroup)

Chloe x Halle, Beyoncé’s twin protégés, set the tone beautifully for the evening. Ethereal r&b harmonies and deep-knocking beats echoed from corners of the massive Jerryworld as seats slowly began to fill up. The sounds were just as soothing as the twins’ romantic futurism aesthetic: the glow of a MacBook over a mic rig wrapped in lush pink peonies and bold sunflowers, the sparkle of a goldflaked Les Paul pressed against a baby blue holographic jumpsuit. These two are the future Beyoncé is building for us.

Next came a lengthy video introduction (sponsored by Lyft, of course, to get even more money out of the tour) with DJ Khaled’s son, Asahd. The motivational-speaker-cum-DJ hit the stage with a kaleidoscope of top 40 hits from his repertoire; these worked fine as crowdwork, but the stadium came alive when DMX and Notorious BIG blared from the speakers. Soon, Dallas rapper Yella Beezy was performing at the edge of the monstrous stage, belting out regional hit “That’s On Me.” Then came enough time for a bathroom trip, and it was show time.

The evening was a more pared-down version of the first On the Turn tour, which was a campy and dramatized Bonnie & Clyde narrative. Part two offered up visuals of the famous couple in their more natural element: slow-dancing on the beach, lounging around the house with the kids, riding motorcycles in Jamaica. There were no police chases depicted on screen this time, no new alter egos or stage personas. The audience instead received an artful portrait of one of the most powerful couples in popular culture.

They didn’t necessarily provide anything new, sans for a few photos of the new babies and some exposed butt cheek. But The Carters flawlessly executed exactly what we’ve grown to want from them. Arrangements and medleys blended both artists’ individual catalogues. Beyoncé even dipped into highlights from past performances: the “Swag Surf” refrain during “Drunk in Love” from Coachella, the “Takeover” and “Ring the Alarm” medley that started on the first On the Run tour. The horn section from the Coachella performance returned, too.

These were called back in a way that was satisfying for hardcore fans and remained compelling for first-timers. And though the running joke of both On the Run tour cycles has been audiences’ indifference to Jay-Z, you had to give Hov his due for his performance in Arlington. 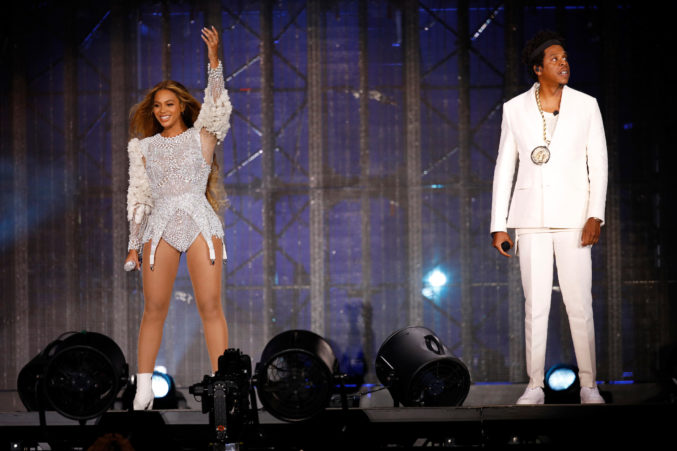 ARLINGTON – SEPTEMBER 11: Beyonce and Jay-Z perform on the ‘On The Run II’ tour at AT&T Stadium on September 11, 2018 in Arlington, Texas. (Photo by Raven Varona/Parkwood/PictureGroup)

The out-of-breath and sluggish Jay-Z we saw at Coachella this summer was nowhere to be found last night. Whatever she did to him—whatever diet, classes, coaching regimen she’s got him on— is working. Gone is the half-assed baby-stepping and rhythmic pointing we’ve come to expect from a Jay-Z performance. Shawn Carter is suddenly quite charismatic and engaged on stage. Anyone is going to struggle to shine standing next to Beyoncé, one of the greatest living performers on the planet. But her husband was no slouch in comparison, except for a very awkward delivery of his own remix verse before Texas legend Pimp C’s part on “Big Pimpin’,” the only point in the night that was uncomfortable and disappointing.

Beyoncé, as always, was a vision. Her waist-length locks cascaded across the stage. She hypnotized the audience with every shake of her hips. Her vocals were in superhuman shape, and a stripped down version of her heartbroken infidelity ballad “Resentment” brought the whole arena to tears. The moves, the looks, the voice—she was as awe-inspiring as ever, bringing only her best to her beloved home state.

Though most fans started to head for their cars once “Forever Young” started to play—a usual go-to set closer for Jay-Z—the couple decided to end on a high energy note with the long album version of their collaborative single, “APES**T.” Beyoncé ended the night rapping a flawless high-speed verse over the booming 808’s and trap synths, putting many of her male radio contemporaries to shame.

The concert largely left what is happening outside, well, outside. It didn’t focus on police violence. It didn’t touch the NFL protests, despite the fact that thousands of black men and women brought their earning power into a venue owned by a man who has banned his players from protesting during the anthem. But in that came a sort of tension release; the room felt free to dance and experience the night, a break before reentering that world.

This time The Carters have nothing to hide and nothing to prove. They’re taking a victory lap, allowing their fans to focus on, and share in, the ride.