Enjoy unlimited access to all of our incredible journalism, in print and digital.
Subscribe Now
Advertisement
Genre

Trang Nguyen, who left The Bomb Factory last month, teams up with Kylee Kimosh to bring more music to Uptown— and to help open The Rustic Houston.
By Lyndsay Knecht | May 2, 2018|12:40 pm
Advertisement

Even skeptics who haven’t messed with Uptown in years should keep an eye on The Rustic‘s calendar. Today is music marketing powerhouse and tastemaker Trang Nguyen’s first as Entertainment Manager for the venue’s parent company, FreeRange Concepts. She joins Entertainment Director Kylee Kimosh, who’s been booking free live music seven days a week by herself— with support of the staff on the restaurant side, she’s quick to say— at The Rustic, and seven other concepts in Dallas, Houston, and San Antonio. The Rustic Houston is coming sometime this year, maybe summer, even. They’re going to be busy.

Nguyen and Kimosh first crossed paths at the Granada. They also worked with promoter Gavin Mulloy, who left The Bomb Factory around the same time Nguyen did last month. Mulloy is now at Legacy Hall in Plano, a far trip culturally from Deep Ellum. So is The Rustic in Uptown, with its catering to SMU partiers and country fans.

Kimosh and Nguyen’s team-up is an interesting one. While Nguyen has been pushing dates like PJ Harvey and Ja Rule/Ashanti and balancing roles with the likes of Homegrown Fest, Kimosh has chipped away at The Rustic’s once all-country-focused program to include more Americana and fusion acts. It’s a holistic shift, as the scenes are intersecting more and more. Case in point: Dallas act Medicine Man Revival, which played its first show ever at The Rustic two years ago for New Year’s and continues to delve further into soul territory.

“I view The Rustic’s physical location as a crossroads between East and West Dallas,” Nguyen, an Oak Lawn resident, says. “The space itself is unique because there aren’t many outdoor venues of that capacity [2,500] in the city. I think putting live music and other cultural events into The Rustic shifts the conversation and challenges the reputation that Uptown often holds.”

Matt Goodman wrote about that reputation earlier this year. You’ll notice the only mention of music is the kind that “pours out of the bars”— there’s not much of a music scene. Still, The Rustic has its own ecosystem going on, with brunches on the weekends, corporate parties and bigger ticketed events. The space itself is an opportunity, Nguyen says.

“I particularly love the backyard vibe that The Rustic stage has. Its capacity is big enough for national acts like Shakey Graves, Lucero and Dr. Dog, but also does not feel cavernous, especially important as there is a free live music component incorporated into the Rustic’s programming that I think, provides a bigger platform and opportunity for up-and-coming local and regional artists,” she says. 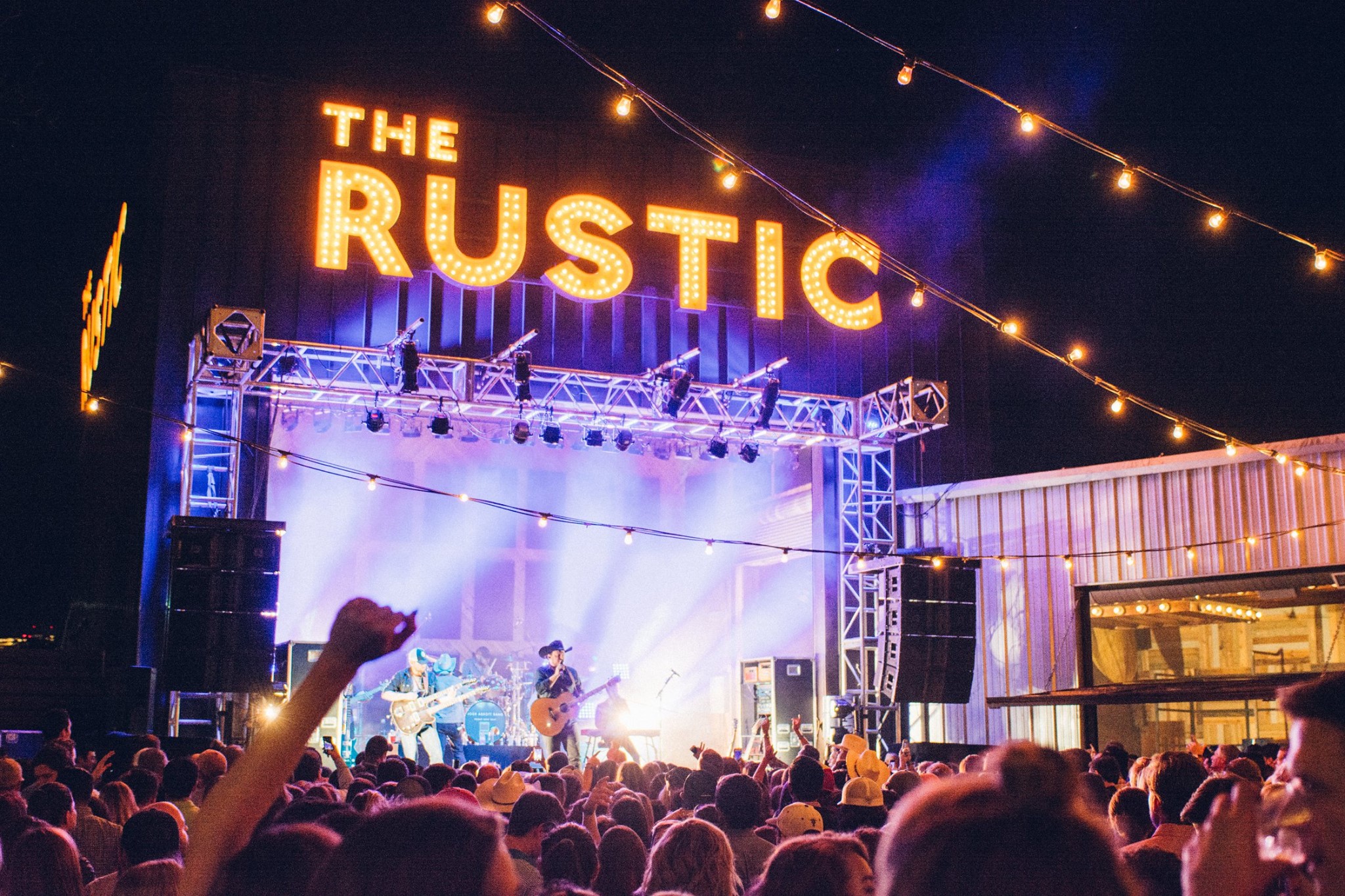 Kimosh says The Rustic’s regular corporate parties help fund tours and albums, for many of the same bands featured on the stage for public shows. Charley Crockett’s been a staple both ways at the venue, which takes pride in its hospitality toward acts who play there.

“I was joking last year that we— airquotes— ‘sponsored’ him with our corporate world,” Kimosh says. “They’re eating a porkchop, they’re having a steak.”

“When I first started working with Charley, he’d already built a local following playing places like The Rustic,” J.R. Denson, Charley Crockett’s manager, says. “They really fueled his growth by paying him fairly and giving him a built-in crowd he could turn into his own fans. They’ve been an invaluable part of this music community. In a little more than a year he’s gone from playing free shows in small clubs and bars to selling out venues around the country and Rustic was definitely an essential launching pad.”

Who’ll get a piece of the stage’s genre diversification is still yet to be seen. But seats are being saved, looking forward. Sketched out so far is Dolly [Parton] Day on August 17, during which Raised Right Men will back 7-10 female lead singers in rotation. The Rustic is christening August Celebrate Women in Music and Arts Month and will turn the ratio of women on its roster up to at least 80 percent, Kimosh says. Let It Burn, an Usher-focused night planned for the fall, sounds like a coup on the now defunct All // Everything series that died when DJ John Stewart was banned from host venue RBC after rape allegations were made against him.  An Usher tribute also whispers the sensibility of Who Cares?, the ’90s-nostalgic DJ duo for which Nguyen moonlights with Nikki Stephens. (They have actually played The Rustic, Nguyen reminds me.)

Kimosh, who’s worked on Bob Dylan and Sheryl Crow dates, says she’s loved interacting with local bands and looks forward to expanding the offerings sound-wise. That’s a long game, she says, but it’s a natural one she’s familiar with, as The Rustic has developed along with the acts they feature.

“I told Trang, it’s my favorite because we’re giving back, because we’re able to watch them grow. It gives me all the warm and fuzzies,” Kimosh says.

Upcoming shows of note include Cold War Kids May 21 and a Selena Tribute June 14.

Get a front row seat to the best shows, arts, and things to do across North Texas. Never miss a beat.
Music The Rustic

The Dallas legend turns 50. Here are a few of our favorite moments, with a focus on how she lifted us all up during quarantine.
By Taylor Crumpton
Pop Culture

The Dallas hairstylist and musician receives a glowing review on Pitchfork and Devy Stonez gets noticed by Apple Music and VEVO.
By Taylor Crumpton
D Magazine Directories